Brothers: A Tale of Two Sons

It’s refreshing to see developers create a different kind of game then what they’re typically known for. Starbreeze Studios is famous for their gritty shooters (The Syndicate, The Darkness), so it is a little strange to see them collaborate with Swedish filmmaker Josef Fares and create a thoughtful adventure game like Brothers: A Tale of Two Sons. It was certainly a risk, but it’s a risk that paid off.

The story is a coming-of-age tale, starring two siblings on a quest to save their dying father. The Tree of Life is their destination, but in order to reach it they must traverse mountains, forests, dungeons, and castles. During their adventure, they have to help each other out in order to solve puzzles, avoid enemies, and assist those in need. 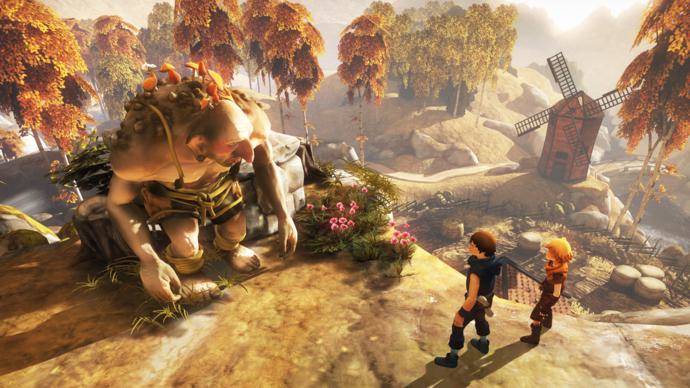 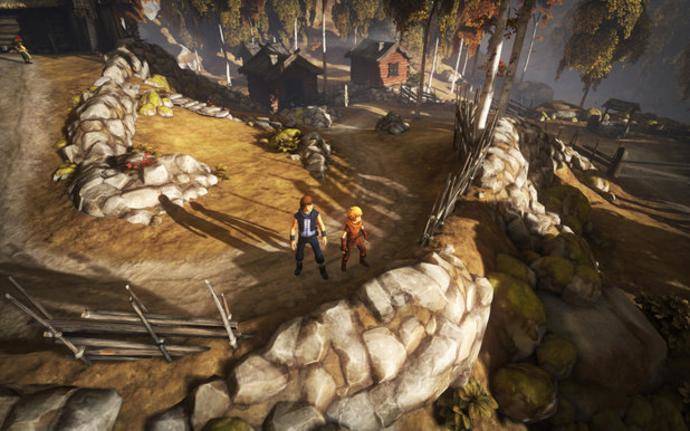 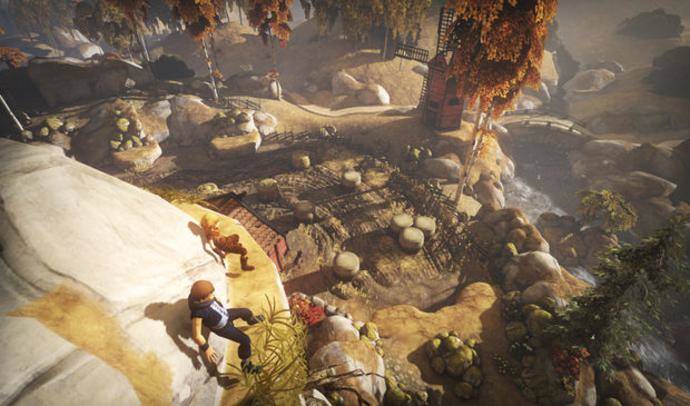 There really isn’t any dialogue, and what little the characters speak is in their fictional native tongue, which isn’t subtitled. Not that it really matters, however, as the narrative is simple enough to follow by paying attention to the cutscenes, and by watching the brothers and NPCs interact by gesturing to one another.

The gameplay is just as easy to grasp, though it can be slightly awkward at first. Essentially, each brother is moved around with an analog stick, and their actions are activated by their respective trigger buttons; oldest on the left, youngest on the right. This takes some patience since most of us aren’t used to controlling two characters at the same time, but it starts becoming second-nature after messing around for a few minutes.

The ease of playing actually works to the game's benefit.

A control scheme like this really hammers home the point that the siblings have to cooperate and learn from each other as they face the odds. With their father at his death bed, and their mother already gone, having died at sea, it’s clear that these two must grow up fast and work as one in these trying times.

The emotional impact of the story is quite strong, and begins right off the bat with a quick punch in the feels. The littlest brother is seen crying at his mother’s grave, who he failed to save from drowning. He blames himself for the loss, and has since developed an intense fear of water. This is reflected in the few swimming sections, where the taller brother has to carry the other on his back.

This isn’t a complete tearjerker, however, though I wouldn’t blame anyone if they kept a box of tissues at their side as they play. There’s plenty of fun to be found as the game advances, like being able to throw a bucket of water on a sleeping guard that’s supposed to open the town’s gate, stealing a couple of goats to use as transportation, or other wacky hijinks the two heroes get into.

Then there are the tense moments, one of which comes when the brothers find themselves in a dark forest, surrounded by wolves. They don’t have any weapons, but the oldest was smart enough to use a torch to light their way. As they move forward, he has to use the flaming stick to scare away wolves, else they both get eaten alive. This is actually one of the more difficult sections of the game, since the little brother has to stay within a certain distance in order to stay safe, and because the wolves come in all directions, this can be a little tricky.

When they’re not meeting new people or running away from beasts, the brothers have to solve a fair amount of puzzles in each location they visit. This can be anything from pulling levers to lower bridges, to climbing cliffs and towers. Most of the solutions are fairly obvious, but there are some puzzles that require some dexterity. One in particular has the youngest dangling from a rope, while the oldest holds him from up above on a ledge. Not only is it required to move the oldest along the ledge in order to reach safety, but the youngest has to be moved up and down to avoid the tree monsters that lunge out from the side of the mountain.

The ease of playing actually works to the game’s benefit. Brothers is all about its narrative and atmosphere, so making the gameplay accessible, and weaving it into the core themes of the story, is a masterstroke. Indeed, Brothers is best experienced in one sitting, so the lack of obtuse puzzles to get hung up on keeps the plot moving nicely.

Mostly everything here is done right, but there are a few hindrances along the way. The camera, while manageable, is a little too slow, and at times isn’t exactly centered on the action. This doesn’t pose that much of a problem, but there are moments when being able to move the camera quicker would have been helpful.

I wouldn't blame anyone if they kept a box of tissues at their side as they play.

The biggest gripe is the ending. It is, for the most part, satisfying, but it comes off slightly rushed, and a bit too on the nose. This doesn’t ruin the game or anything, its just that it needed to be a little more fleshed out, and less obvious, in order to have an even bigger dramatic impact.

Brothers is an exercise in crafting a game with gameplay that matches the story, and it’s successful at it. It’s not the first to do this, but it serves as further proof that it can be done. Despite it’s heavy-handedness, this is a beautiful, engaging journey that shouldn’t be missed.