Bungie’s involvement with the Halo universe is no more. The longtime developer of the FPS that breathed new life into consoles, shooters and hell, let’s just say it—online gaming—is off to next-gen pastures leaving developer 343 Industries to continue Master Chief’s tale with a new series known as The Reclaimer Trilogy.

As always, Master Chief and his trusted AI, Cortana, must save the universe alongside what must be the most incompetent military branch of all time, the UNSC. Along the way we’ll get sporadic glimpses (and a handful of answers) from Chief’s mysterious past and learn that some outrageously tall super-soldiers will do whatever it takes to make sure we all have a galaxy to wake up to in the morning.

It’s been five years since Chief and Cortana were set adrift in the Forward Unto Dawn, but a new threat to mankind means it’s time to get it together and get out of that icy pod! As our heroes blast their way across the universe we learn that part of the struggle is their own. Cortana fills Chief in on rampancy, an issue for AI who live to a certain age. Her “brain” is working overtime, and the eventual result is death. It’s a pretty grisly fate, but Chief assures her throughout the campaign that Halsey (who Cortana’s personality is based on, by the way) will be able to help…if they can get to her fast enough.

Halo has always relied on the fundamentals of killer weaponry and tight controls, and never has this been more apparent than 343’s first foray into the universe. Each weapon perfectly compliments the next in what has to be one of the finest examples of gaming arsenal in the history of the medium. Alongside your trusted assault rifle, Chief will wield any number of man-made and Covenant weapons, each with unique properties that lend themselves brilliantly to whatever situation. Certainly, you’ll find your favorites and stick with them fast, but experimentation is highly recommended as you headshot and jetpack through your way through the campaign. The new/improved light-based weapons (Light Rifle and Scattershot) are especially useful against a certain Promethean enemy who just won’t seem to go down any other way. 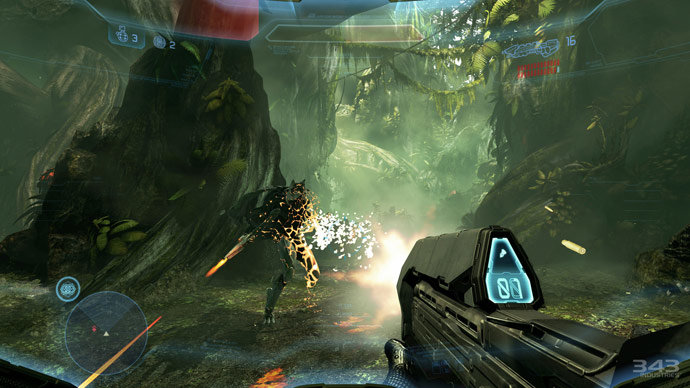 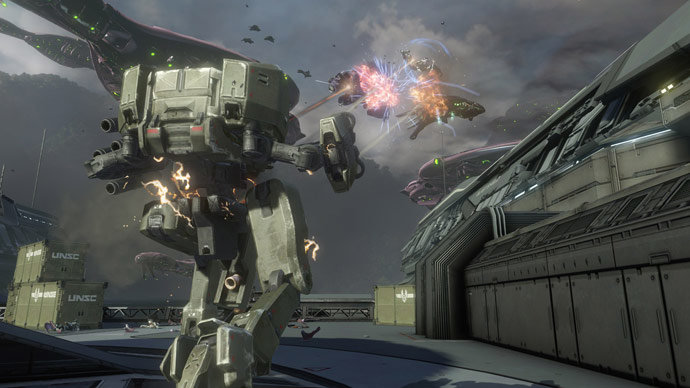 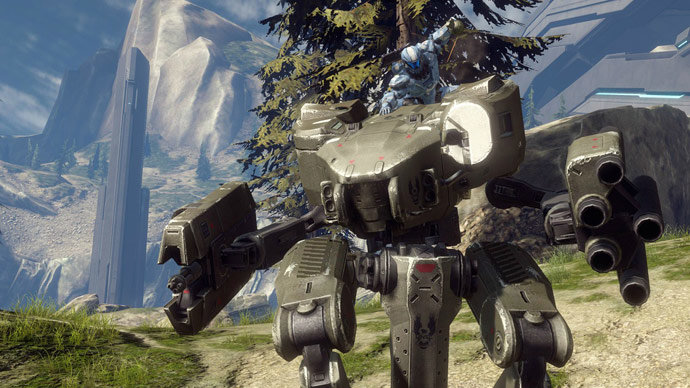 Throughout the opening few levels, we are treated to a lush variety of locations and environments. These include a zero-g battle with the Covenant on the hull of the Forward Unto Dawn, a beautiful jungle with outlandish threats hiding behind every vine and an almost volcanic-seeming area littered with robot-dog-like enemies. Many areas are beautiful at first, but by the time you make your way through the 8 campaign missions you’ll have reached and fought through some of the most boring environments in the history of gaming. 343 renders these locations beautifully, and the game always looks stunning, but no matter how hi-def a colorless series of platforms and laser-bridges are created, they still come off as drab and repetitive. It’s lucky, then, that everything is so much bigger this time around. Halo Reach was just about as linear as it gets, but this newest installment offers such variety for completing missions that it’s worth multiple plays. Alongside the usual means of traversal is an excellent assortment of vehicles like the good old-fashioned Warthog, the super-powered Mantis exo-skeleton-robot- thing and any number of semi-similar Covenant vehicles. Most vehicles are usually fun to command and, other than a few sections where you won’t be given a choice, totally optional.

Multiplayer is better than ever thanks to plenty of well-planned maps (the likes of which Halo veterans ought to be more than familiar) and aforementioned arsenal. Whether you’re a longtime aficionado or a new convert to the world of Master Chief, it doesn’t take long to get into the action and start pulling off headshots. There’s an almost heavenly balance to the way 343 has constructed the many modes…online gaming hasn’t been quite this fun since Call of Duty 4.

Slightly less exciting is the episodical co-op experience of Spartan Ops. Longtime fans will find plenty to like about this mode, but those who are using Halo 4 as a means to jump into the series may be confused. Granted, Spartan Ops is still receiving support months after release, but unless you’ve got the time and money to follow each and every episode (which we don’t doubt some will do), it might not be worth it to invest so much time and effort into a mostly bland offering.

It doesn’t get better than this until we’re into the next generation of consoles. 343 Industries deserves every commendation there is for creating some of the most gorgeous, detailed cut-scenes in the history of games. If this is what Halo looks like at the tail-end of this generation, Halo 5 will probably look better than your real life.

There’s a new composer on board for the latest installment and he’s brought a more minimal/electronic sound along with him. The new musical direction is a little less apparent than the chanting of previous games, but as you make your way to the final showdown, the triumphant tunes will have you so pumped you won’t believe it.

Voice acting rarely strays beyond functional except for Cortana and Halsey. Simply put, we can feel these characters. Chief gets the job done, but it’s hard to believe he cares about Cortana as much as he says he does given the lack of emotion or inflection in his lines. Yes, he’s a genetically engineered super-soldier, but his relationship with his AI is about as close to love as any man/computer has ever come. 343 explores Chief’s more human elements in this outing, but he is more robotic than Cortana, and it’s weird.

Longtime fans will find the game they’ve been waiting for and then some. Halo 4 is every bit as exciting and beautiful as we’d all hoped, and 343 couldn’t have done a better job mixing in new elements with proven past concepts. That said, new players might have a tough time jumping right in, and would do well to pick up any previous games in the series (or looking up a thorough online synopsis). Assuming Spartan Ops fleshes out a bit and we are given ongoing support for competitive multiplayer, Halo 4 will go down in gaming history as a triumphant new direction in one of the most beloved series the medium has to offer.