Developer Epic Games takes badass gaming to a new level with an excellent conclusion to one of the Xbox 360 greatest trilogies. Gears of War 3, like its predecessors, is a cover based 3rd person shooter that delivers high paced action at every corner. The game play doesn’t change from the previous two games but that isn’t a bad thing and with the addition of some new toys and a new multiplayer mode Gears of War 3 will be played addictively for some time to come.

The games presentation is strong with graphics and sound that deliver a great experience during game play. The classic roadie run is perfected and feels great as bullets whiz past you and you smack easily into cover. Gears of War is known a lot for its killer execution moves like the curb stomp and chainsaw but now every weapon offers their very own execution which provides a lot of new fun in disposing of those nasty grubs.

The story starts with Marcus Fenix and the members of Delta squad struggling to get by in a fallen apart world where the Coaltion of Ordered Government, COG, have all but disbanded. Some good news though is that Delta Squad as some fresh faces with a now armored and kickass Anya Stroud, Samantha “Sam” Byrne and Jayson “Jace” Strattonplus and of course a new Carmine. The enemies this time around include locust and a lot more Lambent, locust infected by imulsion who explode on death and both of whom come in wide varieties. 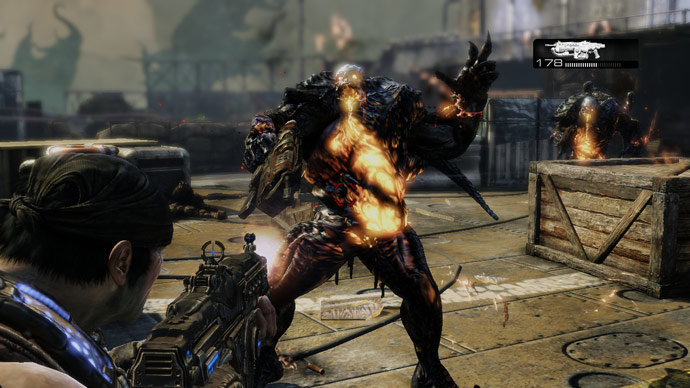 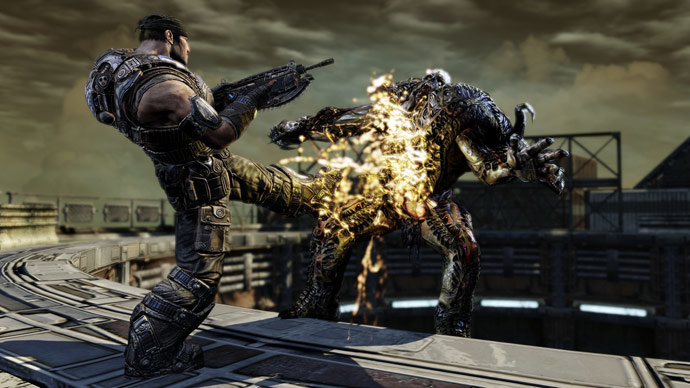 The action starts off with the Lambent overrunning a ship you are on and doesn’t let up until the final battle. The action is fast paced and exciting but doesn’t really have any surprises as the boss battles you encounter seem to have been done before and even the final boss was predictable and pretty ordinary. The dialogue in Gears games as always been sub-par and is no different this time around as it relies heavily on its game play and not ability to tug on your heart strings. That being said there is a brotastic moment in the middle of the game that combines the characters relationships, great visuals, and powerful use of a come to know Gears of War song that makes you put down your controller, call up your best friend and tell him that you love him. The witty Baird and ex-thrashball star Cole also provide some funny one liners but besides that the dialogue just makes you shake your head.

The campaign gives you the option to play 4-way Co-op and control different characters throughout its play through. The story will take you roughly 20 hours depending on the difficulty you are playing on and if you are playing with friends. Even though the AI is pretty strong, Co-op is definitely the way to go as it provides shared entertainment and easier teamwork. The Campaign is a solid one, nothing super fancy but the conservative changes are enough to make this a great conclusion to the story.

Gears of War 3 comes packed with tons of multiplayer content that is the main reason players will keep playing. There are a variety of versus mode game types including some of the old time favorites like execution and capture the leader but now a wildly popular new type as been added. Team Deathmatch gives each team 15 lives to share between players; players are able to respawn after death as long as lives remain. Once all lives are diminished then once a player dies they do not respawn and when all players of one team die the other team wins. Team Deathmatch brings a more mainstream multiplayer to gears of war that can attract those who are fans of games like Halo or Call of Duty.

Most of the maps are well received and fair for both starting teams. Some maps offer gimmicks that add another fun aspect to the game besides just fighting the other team, example being the scoreboard falling down on the thrashball map and killing anyone beneath it. All the new weapons work great in multiplayer and offer more strategy when taking out your enemy. My favorite new weapon, the digger shoots an explosive that travels underground until shooting up out of the ground and exploding its target. This works great when trying to take out enemies that have you pinned down from behind cover in both multiplayer and single player.

Horde mode was an instant favorite when it came out with Gears of War 2 and Gears 3 just took its success and perfected it. Players work with up to four others to fight off wave after wave of locust all the way up to wave 50. Naturally the waves become more difficult has you keep going and on every tenth wave players must take down one of a variety of bosses. The bosses are not the only thing new, when players complete waves they gain cash that can be used to fortify their stronghold with things like barrier, turrets, etc. You play on the same maps used in versus mode but it becomes clear pretty soon that some maps are better suited than others for horde. Also new to Gears of War 3 is Beast mode where players control the locust and attempt to take out 12 waves of well armed humans. Beast mode is a fun a different way to play the game and may not be as popular as the others but serves as a great way to blow off steam if you’re not doing well in versus mode.

There is a ranking system in Gears of War 3 and as you play matches you will gain points based on how well you did to increase your experience. Players can also complete tasks that earn them medals that give a bunch of experience at once. Ranking up unlocks new characters that can be used in multiplayer. The top level is 100 but since there is no down ranking it really only serves as a purpose to show who plays the most not who is the best.

DLC- Epic released plenty of DLC for Gears of War 3 ranging from new maps to new characters and even a new short campaign to play. The new campaign places you in events before Gears of War 1 and you control Kim and Zeta squad. The missions are fun and put you in city environments which is nice to see again, definitely a great idea by Epic.

Any fan of the Gears franchise will accept this game with open arms and love it dearly because it is easily a perfection of what Epic set out to do with the series. The game may not convert those who are not a fan of the third person shooter that is Gears, but if that’s you than you should get your head checked. All in all Epic Games gives us great presentation and tons of options to play around with in Gears of War 3. The DLC and multiplayer will keep players hooked for an extended period of time and helps prove that this game is one of the best Xbox 360 games, and best shooters out there, yes it’s that good.