In the last few years, the big budgets and carefully-constructed profit margins of AAA-titles have unfortunately taken a toll on the creativity of games. There are more modern/futuristic war first-person shooters and open world action games than ever – and at the same time, less unique protagonists and stories being told within these genres. Although some of these games may be impressive with game mechanics and scope of their story, I’ve felt less of a connection with the characters I control and as a byproduct, the journeys I take with them become easier to forget.

A game like Bioshock Infinite gives me hope for the new generation looming on the horizon – it’s one of the most ambitious titles of this era of consoles, executing a difficult, thematically complex narrative with confidence, whilst constructing a beautiful, mystery-filled world in the sky to tell it in. Openly philosophical and deeply emotional, Bioshock Infinite is the most satisfying gaming experiences I’ve had in a long, long time.

When we meet private investigator Booker DeWitt, he’s on a boat off the coast of Maine, heading to a lighthouse to complete a debt-clearing assignment: kidnap a girl from the flying city of Columbia. But from the moment Booker steps into the deeply religious world of 1912 Columbia, it’s clear there’s something dark underneath the bright utopia, mysteries that will slowly reveal themselves throughout the game.

Although the parallels are obvious, Columbia is a welcome departure from the dark, enclosed city of Rapture from the first two Bioshock games, bright and colorful skies, with beautiful colonial and industrial architecture lining the backdrop of clouds on the horizons. Infinite – like its predecessors – is a fairly linear game, but there’s so much to explore and investigate, it’s rare that the experience feels constricted.

There are many things to ponder over while walking around Columbia; the statues revering Ben Franklin, Thomas Jefferson, and George Washington as religious figures, the overt racism of the townsfolk, and the suggestive propaganda posters strewn about the walls of the city. At its heart, Colubia is American Exceptionalism at its most extreme – to the point Columbia exists in the sky as an entity separate from the American Union, despite revering many of the same heroes. 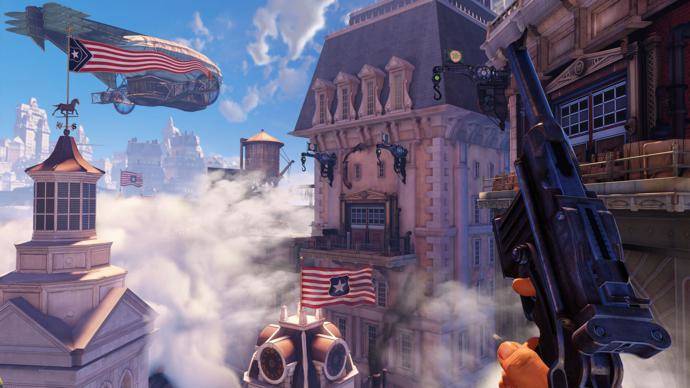 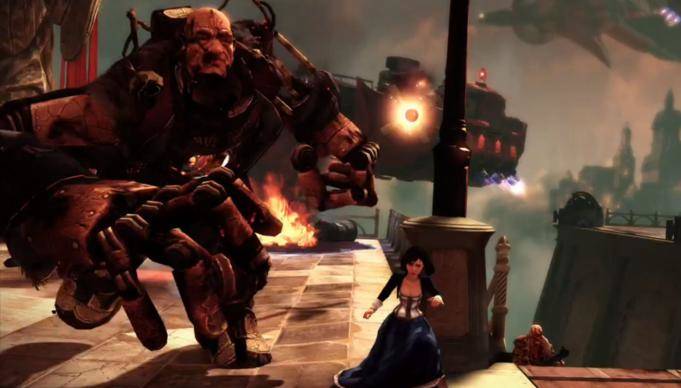 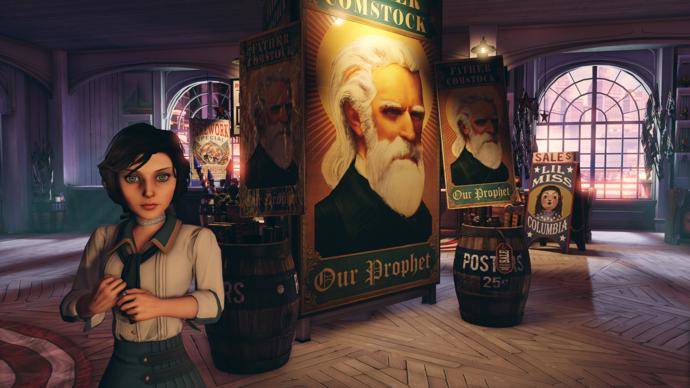 This is the deeply philosophical backdrop to the story of Booker and Elizabeth, the girl he comes to ‘rescue’ and sell to the people he’s in debt to. It won’t be easy; Booker will need to steal her away from the tower of Father Zachary Comstack, otherwise known as The Prophet in Columbia. Elizabeth is not only the key to the narrative of the story, but in making Bioshock Infinite an emotional experience: she’s one the most compelling, textured characters to ever accompany players in a video game. As her naivety is stripped away, her and Booker both grappling with the mysteries and conspiracies of Columbia, she transcends the typical presence of a companion NPC, an integral part of the game experience.

Not only is she helpful in the story – she’s very useful in combat. As you walk around the world, you’ll be exploring every nook and cranny for voxaphones and kinetiscopes that reveal plot details, or pieces of equippable gear that provide different buffs in combat. Every single piece of the world is a clue to the story, and Elizabeth helps you interact with it all, revealing her personality as she views the world around her, pointing out lock picks to pick ups and tosses ammo and health during battle.

If there’s one area Bioshock games have lacked a little, it’s in combat. Previous titles have been perfectly acceptable first-person shooters, but the variety and pacing of Infinite’s interactions can compete with the story for the first time. Throughout the game, players will find Vigors, which use salt found around the world to provide different abilities activated by the left trigger. These upgradable abilities include lighting enemies on fire, electrocuting massive Robot George Washingtons (yes, Robot George Washingtons), or ‘possessing’ enemies and turrets to turn the tide of battle in your favor.

It makes up for the lack of variety in weapons – I found myself comfortable with three or four weapon types, switching up the two equipped vigors frequently, allowing me to approach every battle in a unique way. It covers up some of the tedious sequences in the middle third of the game, where the story feels a bit padded and encounters are a little too straightforward and too long.

But these are small complaints: things like vigors and the magnetic roller coaster-like air rail system don’t just give more variety to gunfights: they provide further context to the story, a rare example of gameplay servicing the narrative (and not the other way around). It does so right down to the final, wildly entertaining set piece, which forces players to utilize everything at their disposal (and then some) before bringing all of its story lines together, revealing things piece by piece until the mind-bending (and surprisingly touching) conclusion.

Aside from the few stretched hours of gameplay in the middle, Infinite is a big step up from previous Bioshock game’s combat systems, which makes their use of varied enemy types a much more engaging experience. Plus, it’s all in service of the fantastic story which pays off in one of the most satisfying conclusions of any game ever.

Even when considering the limited hardware under the 360’s hood, Bioshock Infinite is a gorgeous-looking game. Irrational Games is known for building unique, intricate worlds with personality, and Columbia is their finest digital achievement, bar none. Whether standing on a ledge, looking at the massive brick buildings, or zipping around on the rail system, Columbia’s color palette gives definition to every one of the game’s semi-confined areas, even when backtracking or returning to certain sections at different parts of the story.

Every crevice of Infinite has meaning within the narrative, right down to the NPC’s walking around, pontificating on the lives they live, and the people in power above them. Unfortunately, they don’t really interact with the player at all (save for a few rare occasions), and there are times where it feels Booker is merely reflecting on the happenings around him, rather than being an active participant in what’s going on. These times are rare, though and, for the most part, Infinite’s atmosphere will distract from the small, rare logical fallacies in the game and plot.

Infinite isn’t just a visual extravaganza, though: the game’s audio is key to pulling players into the world. The performances of Elizabeth and Booker are wonderfully nuanced, absent of the melodramatic tone of so many mainstream video games before them. And when characters are quiet, radios and record players play curiously out of era tunes with old-timey arrangements, and subtle, elegant strings provide a backdrop for dramatic moments of action, or important character beats.

I could scrutinize Infinite’s few flaws – the stretched second act, the lack of multiplayer or real replay value (outside of a super-challenging, perma-death 1999 mode) – but those tiny shortcomings can’t even come close to overwhelming the deeply engaging, emotional experience of the 12-hour campaign. Bioshock Infinite is an unforgettable, intellectual experience, a testament to the ambition still thriving in the much-maligned big budget console game industry.