Reboots, remakes and reimaginings seem to be all the craze these days. This year we’ve already seen a different take on Metal Gear, a modernized Devil May Cry and now the highly anticipated reboot of Tomb Raider. This new version of Tomb Raider is more character-driven, cinematic and is reminiscent of many modern action-adventure titles. While it does capture some of what made the original games great, the exploration and puzzle solving play second-fiddle to intense shoot-outs and action-packed cutscenes.

During an expedition to find the lost Japanese city of Yamatai, Lara Croft and her fellow treasure hunters find themselves getting caught in a horrific storm while aboard their ship The Endurance. The crew is split up and Lara finds herself alone. It’s up to her to rescue her friends from the insane locals, discovering the island’s secrets along the way. 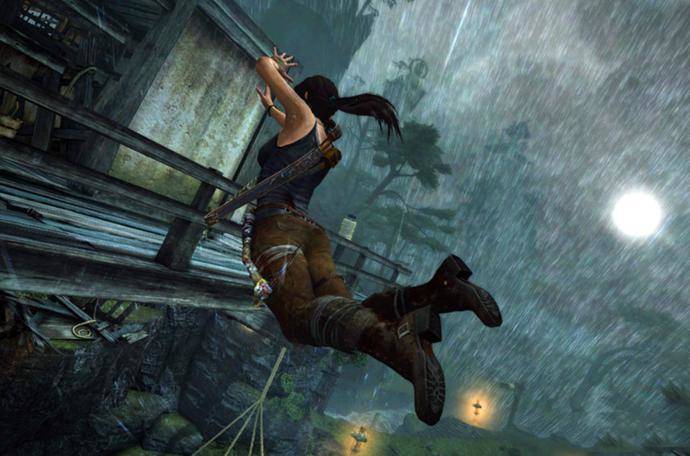 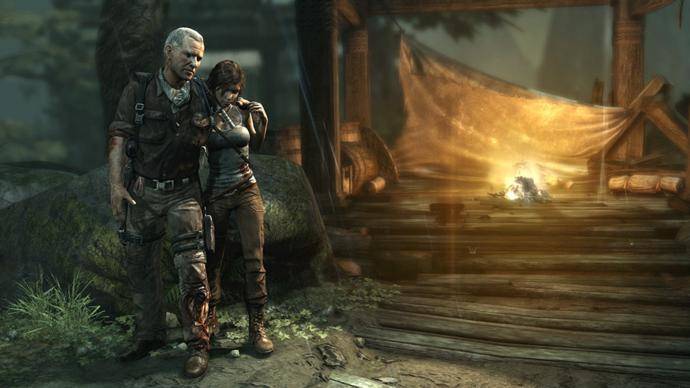 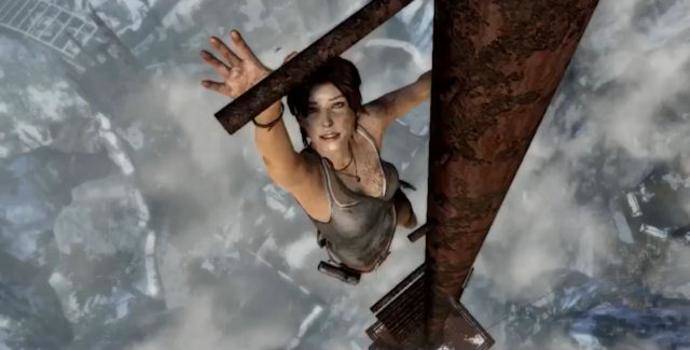 Croft’s fellow shipmates include Conrad Roth, a man that was friends with Croft’s treasure hunting father and served as her mentor. Croft’s best friend, Samantha Nishimura, is also along for the ride, but she’s not just there for moral support – she’s filming the adventures of famed archeologist Dr. James Whitman. Whitman is trying to make a name for himself and feels that finding Yamatai will put him on the map as one of the greatest archeologists ever; he’s the kind of egomaniac that you know will screw things up. The rest of the crew also seems to have been called up from Central Casting, including a surly old helmsman named Angus that’s “seen it all.” None of these characters are remotely interesting and only serve as plot devices. Indeed, the primary focus of the story is Lara Croft and her shift from a woman living in her father’s shadow to a full-blown tomb raider.

The story does a decent job as a Lara Croft character-study, but the development for the other characters is virtually nonexistent and any emotional moments the game might have had are lost. Sure, one does, at times, feel a connection with Lara as she struggles to find her way through dark forests and caves, but the paper-thin plot and bland supporting cast don’t provide much incentive to truly immerse yourself into Tomb Raider’s narrative.

The gameplay is perhaps where Tomb Raider is strongest despite how samey it is. Lara Croft moves fluidly and using her weapons is a breeze. The bow and arrow is especially fun to use (which is perfect as you’ll be using it a lot). As you progress through the game you’ll find salvage scattered around the island which can then be used to upgrade your equipment at campfires. Croft is also able to learn more skills as she gains experience, but this RPG element seems a bit tacked-on since most of the skills you unlock you’ll more than likely never use.

Among the salvage are parts for the various weapons Croft has at her disposal. As weapons get upgraded, they become more powerful and useful. In particular, the bow is not only an effective killing device, but it comes in handy when you gain access to the rope and fire arrows. With the rope arrows, Croft is able to create zip-lines that allow her to explore areas previously unavailable, and the fire arrows assist in solving puzzles and making enemies scream in pain. The gunplay is also a treat thanks to a nice free-aiming system and smooth cover mechanics.

While the weapons and solid combat controls make the action sequences enjoyable, Tomb Raider is at its best when you’re exploring. Even during most missions you’re allowed to freely wonder the entire island to find relics, hidden tombs and GPS units. There are even journal pages that Croft discovers that not only provide insight to Yamatai’s sordid history, but also give some more background information on the secondary characters who were keeping journals while aboard The Endurance. While this bit of lore is useful, the character development probably would have been better served if it were part of the primary story. Regardless, these hidden items do offer an incentive to backtrack and take your time.

I do wish, however, that developers would find other ways to coax you into experiencing everything a game has to offer. Collecting is a tired device that numerous game designers use to arbitrarily lengthen a game, and it’s made even more obnoxious when these collectibles yield nothing. The majority of these trinkets Croft finds don’t do anything interesting, and only the hidden tombs offer anything worthwhile. While playing around in the different areas of the island can be fun, it’s unfortunate that the adventure that is the staple of the Tomb Raider series has taken a backseat to non-stop action.

The set-pieces are massive and gorgeously rendered. Everything from the misty forests to the ramshackle villages are intricately designed and make for a lush playground to explore. The physics allow for detailed explosions, great character movement and bring the entire island to life. It is a bit disappointing, however, that the camera gets locked-in at times while you’re exploring just to show off something cool the designers made instead of focusing on something more important. This is a minor complaint, but it does make you feel like you’re not in control of the game.

The music works well for the atmosphere, but that’s about it. Pretty much everything about the music is what you’d expect from an action-adventure game: loud horns during escape sequences, quiet strings as you creep slowly through a forest, etc. For what it is, it could have been a lot better. Same goes for the voice-acting which seems to just go through the paces.

The sound effects, on the other hand, are nice and give great emphasis to the fact that the entire island is crumbling. The sound of rushing water, rocks tumbling to the ground, twigs snapping and buildings collapsing help to remind you that Croft’s next step could be her last.

In truth, I did enjoy a lot of my time with Tomb Raider. There are moments where the trappings that made the original Tomb Raider series so unique are present, but sadly the adventure-filled gameplay and puzzle solving are secondary. This is a game that wants to be like every other action-adventure game out there and, to its credit, it does that well. The hard truth is that it didn’t need to be like other AAA fare. By cramming in all of the trivial fluff found in so many games, Crystal Dynamics created a game that lacks focus in both its story and gameplay. Tomb Raider can be a lot of fun when it works, but the end result is a hollow, unchallenging experience that is only worthy of a single play.