The original Epic Mickey was fairly well received when it was released on the Wii in 2010. It was well received enough that its sequel, Epic Mickey 2: The Power of Two, was released across four different platforms. Despite very average reviews and disappointing sales, The Power of Two still managed to make it to the PlayStation Vita late last month.

While it’s most likely the best version of Mickey’s adventure through Wasteland, that’s not really saying much. Like the characters you’ll come across throughout your adventure, Epic Mickey 2 is bound for the long, dark, dusty recesses of your memory.

In many ways, Epic Mickey couldn’t have existed without Kingdom Hearts. I get a very similar feeling from the two franchises. Both are adventures through cameo appearances and vague references, references that would pass unnoticed if I didn’t understand them but which instantly make me smile if I’m in on it.

In that regard, Epic Mickey 2 is unbeatable. They’ve created a world so steeped in Disney history that you won’t often manage to go ten minutes without seeing some little secret. For someone who loves the brand – especially the early stuff – the gameplay isn’t what you’ve come for and you won’t be disappointed.

No, the disappointment is firmly left for those that come in expecting an actual gameplay experience.

In many ways, Epic Mickey couldn't have existed without Kingdom Hearts. I get a very similar feeling from the two franchises

Dull level design will have you not really enjoying the bits between cameos and the AI partner that you’re stuck with will annoy you absolutely no end. Actually, that last point is important enough that I’ll stress it again: you’ll be annoyed no end.

There are times when you’ll find yourself waiting 10-20 seconds, perhaps more, while Oswald works himself into the right position to grab a switch or open a door. It’s like watching a truv do a turn in the road down an alley.

Like the original Epic Mickey, most of the gameplay in The Power of Two is based around the idea of paint. You can restore Wasteland to its former glory by using paint, while you can remove things entirely with paint stripper. This leads to a ton of potential, but it never really feels like it hits its stride.

There’s a couple of ways you can use your paint. Either with a mix of shoulder buttons and analogue stick, which feels unnatural at first but grows on you a little as you play, or with the touch screen. The touch screen is the best way of handling things, but it isn’t for everybody and it doesn’t even fit every situation.

“Have You Tried The Door?”

There’s a kind of simplicity to Epic Mickey 2 that’s both infinitely frustrating and not entirely accurate. You will rarely enter a new room without being told exactly what it is you need to aim for, if not details on how to get there as well. It’d be annoying to a child, and it is far more so for an adult. 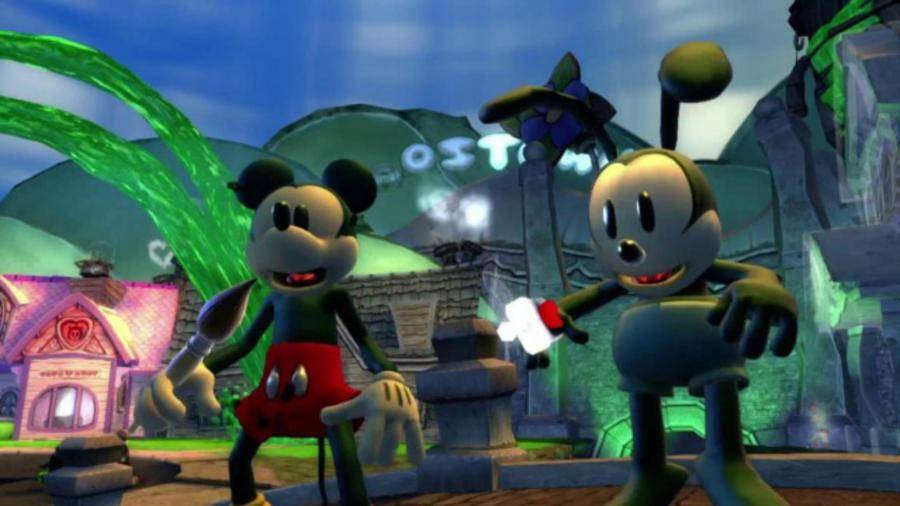 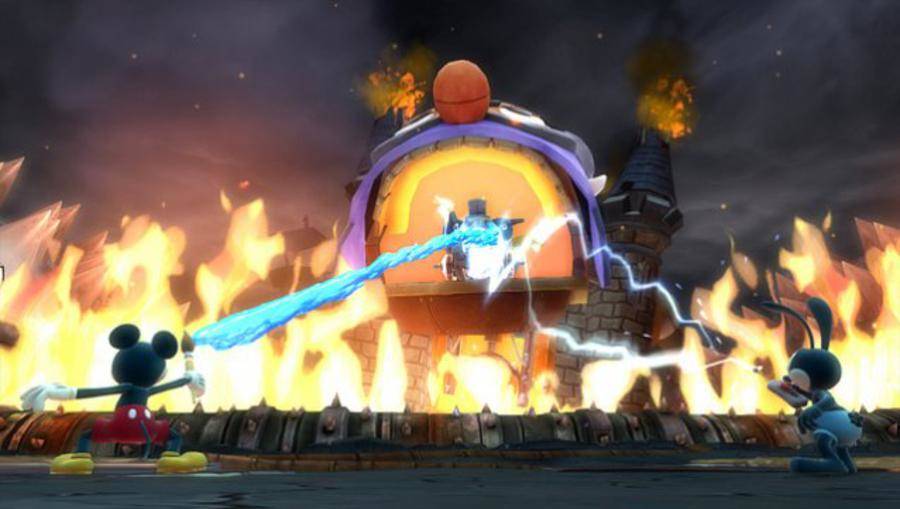 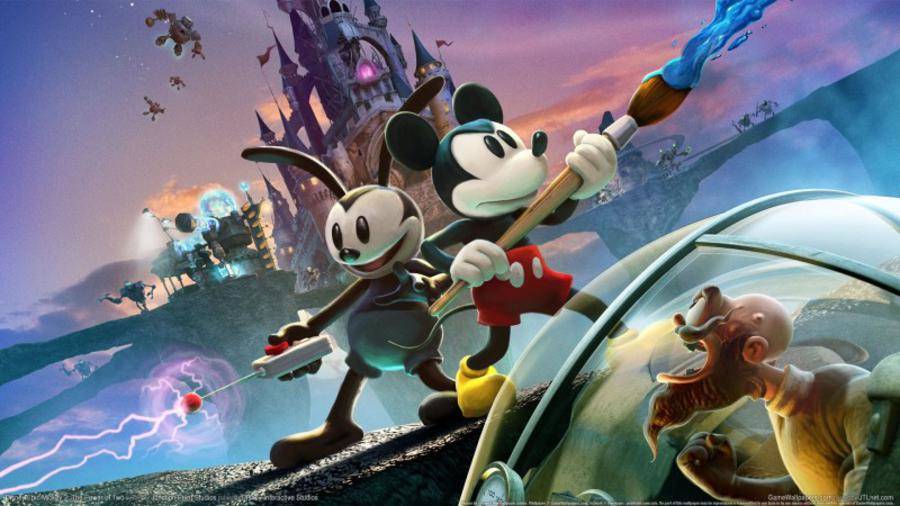 It’s not just that though. There’s also more than a few times where you’ll be told to do something, and then you’ll find you need to do something else entirely to trigger it. This leads to moments that feel like they should be simpler than they are, and it almost makes you feel like you’re missing the point.

You should never be forced to either explore for hours, lucking out when you find some little switch or lost enemy, or to look online. Unfortunately that’s something that Epic Mickey will make you do.

That you must fight with a camera that doesn’t always feel on your side does nothing to alleviate these situations.

Different Shades of Black and White

Say what you want about Epic Mickey 2, the visuals are stunning. They might have been made for the OLED screen and the colours pop as you move from area to area. Even the darker moments ooze atmosphere and are made slightly better by having it displayed so beautifully.

The voice acting and sound manage to be very strong as well. Although the voices are largely contained in cut scenes or one off townsfolk, they’re done as well as you’d expect from a Disney title. The sound is more than passable and the music is charming from start to finish.

There will probably never be another Epic Mickey game, and it’s easy to see why. They’ve managed to mess up on such a scale that it’s hard to want to get through to the end. It’s not that The Power of Two is actively bad, but that it’s so mediocre, and when it comes to Disney, that makes it stick out all the more.

This is one to avoid unless you enjoy Disney culture, and even then, you’ll probably be disappointed. If you absolutely have to buy it though – and nobody would blame you for that – get it on the Vita.