Tearaway is, simply put, a creative gem. It’s a game solely created to showcase the power of Vita’s hardware, and just how pleasant of an experience a videogame can be. Developer Media Molecule, known for its inventive work on LittleBigPlanet, cements itself as a visionary powerhouse with Tearaway. It never runs out of ideas, it’s expertly paced, it is undeniably charming, and it spews out a cordial atmosphere throughout the entire journey. If there’s ever a game to show what a unique and technically efficient device the Vita can be, Tearaway is a prime example.

A World of Paper and Crafts

But while the game’s simple story isn’t the first example you’ll use, it is still told with a charming essence. You resume the role of Iota (or Atoi depending on the gender), who is both a messenger and a message itself, which is made apparent with his envelope shaped head. His goal is to deliver himself to you, because it quickly becomes known that you’re the star of this story, and Tearaway’s world.

Through the clever use of the Vita’s front and back camera, your face becomes displayed on the surface of the sun and Iota is tasked to reach you. Don’t expect the story to pull on your heart strings, as it isn’t anything that profound. But it does complement what the game is trying to be, a prolific Vita exclusive.

Tearaway is filled with alluring characters and an equally wonderful world. And it’s all made out of different kinds of paper, whether it’d be the different-colored sheets of construction card, or the messy and dark newspaper pages. It’s a luscious aesthetic that is brimming with originality and unfiltered creativity; I’ve never played in a world quite like Tearaway’s. And because each character is designed in a certain way, this fuels their relevance and impact. Despite being all paper-based, there’s a healthy variety of landscapes you’ll visit.

Meadows, forests, a barn, laboratory, caverns, a fish town; it’s all there. There’s also an absence of voice-acting apart from two, god-like creatures that equally command and guide Iota throughout his journey. But this shouldn’t be a matter of concern as this cleverly, but subtlety, adds to both of these characters’ power.

The game lets it also be known that you’re just as equally, if not, more powerful. A huge focus in Tearaway is the ability to draw anything you like, and easily place it inside the game’s world. Throughout the experience you’ll be asked to create different kinds of objects for certain characters by drawing them on construction paper, with the use of the Vita’s front touch screen. Does a squirrel need a crown on its head? No problem, just draw it up, with any color you like. Does Iota need a pair of mittens to brave the cold mountains? Ok, just draw. This follows the many different, pre-determined objects you can purchase in the game, for those unwilling to draw something themselves. 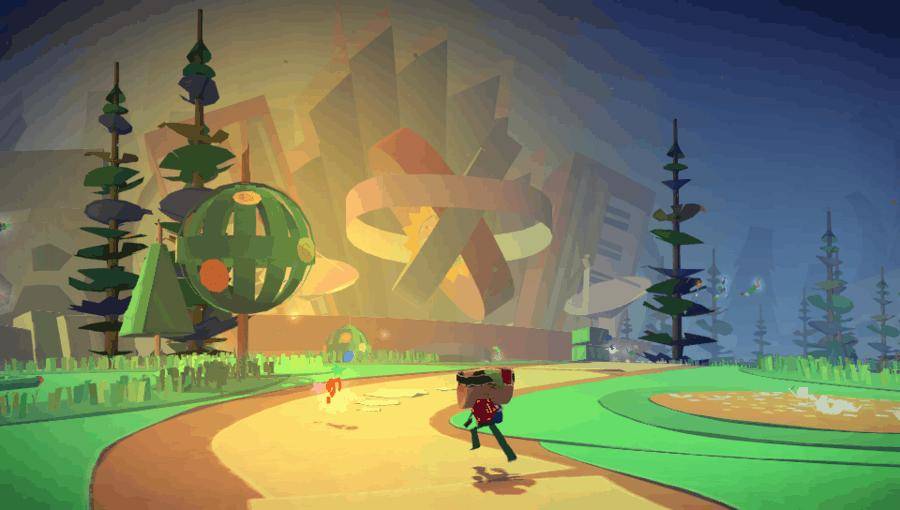 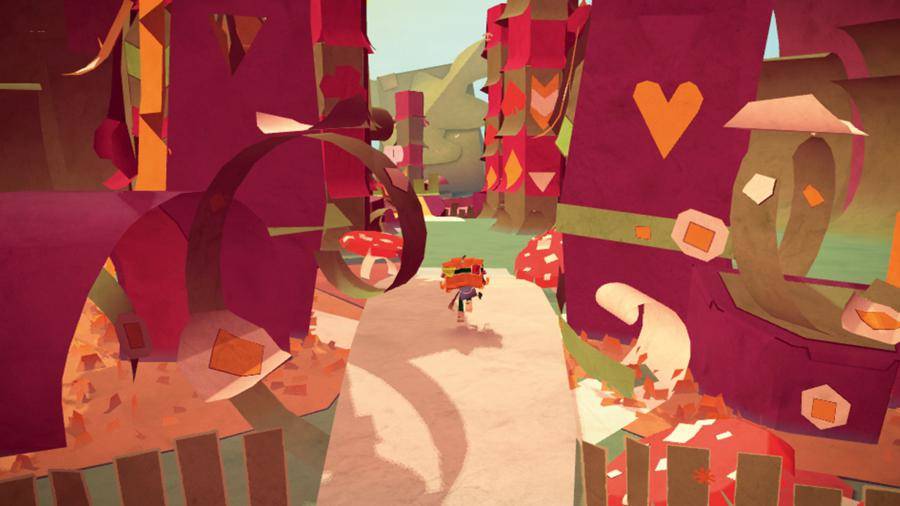 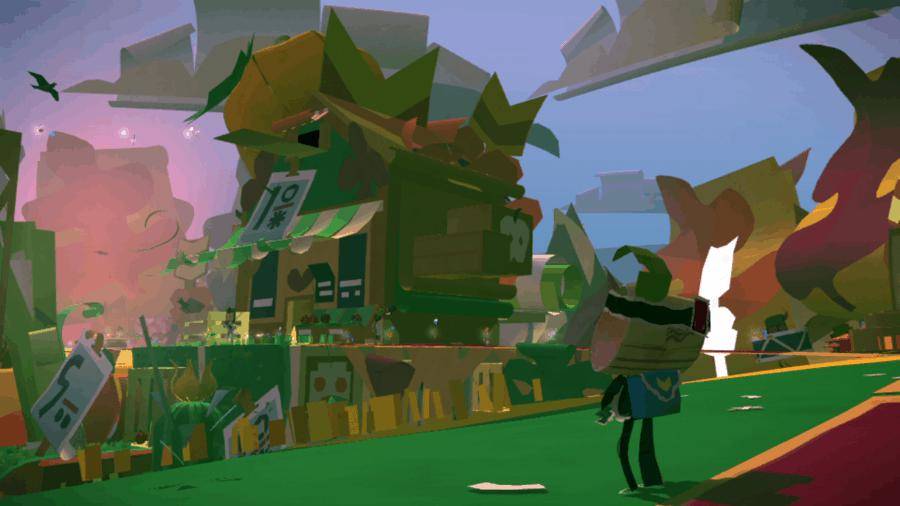 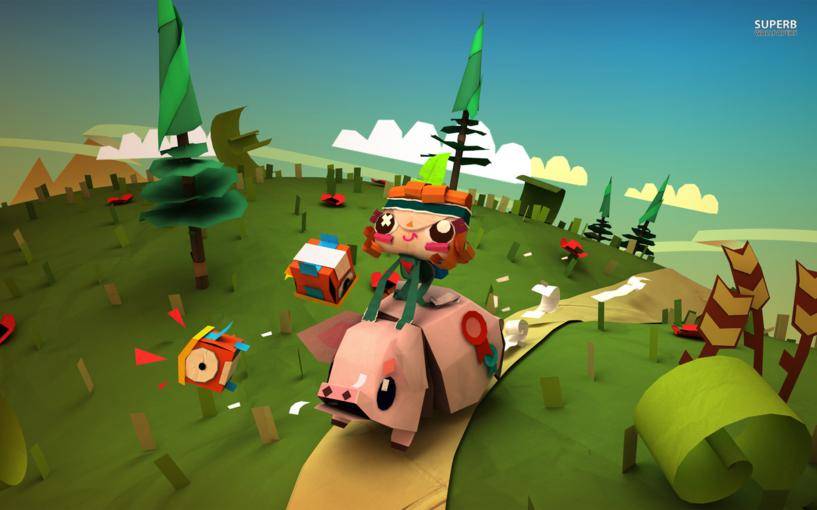 Not only is this one of the many ways the game makes use of the Vita’s sensors and inputs, it also truly makes you feel like a participant in Tearaway’s world. The game wants you to play and mess with it. The platforming sections, however, are perhaps the most noticeable and compelling uses of the Vita’s hardware. Objects filled with the pattern of Playstation buttons indicate whether you should tickle or drum the rear touchpad, allowing Iota access to certain environments. Some of these same objects let you press on the touchpad and rip a hole in the game’s paper-thin world, once again opening up a pathway for Iota. Others are covered with a shiny fingerprint texture that needs pulling or peeling. Towards the end of the game, where the platforming becomes a bit more challenging, Vita’s motion sensors come into play in ways I couldn’t even imagine.

The sound design adds even more life into Tearaway’s already colorful world. The noise objects make when being tampered with, the distinct sound when scissors cut into paper, and the wacky instrumental score are all beautifully realized and add depth to the overall experience.

The animation is another expertly designed facet as Iota always feels like he’s made out of paper.

The game’s combat is painfully superfluous, however. There are certain moments when Iota has to vanquish scraps, vicious little creatures that take the role of the antagonists. Iota almost always finds himself in enclosed spaces when encountering them, and there isn’t much variety to the combat itself, apart from when Iota becomes a little bit more capable. But even then, these sections are marred by the rest of the game. They feel out of place and only put there to add longevity to the, still, short journey.

It took me around six hours to finish Tearaway, making it one of the shortest games for the Vita. It’s also fairly linear, with a pre-determined path awaiting the player, but it’s really better for it. I found myself still wanting to play another level, and imagined how deep Media Molecule’s creativity with the game can go.  But in this short span, Tearaway has a lot more to share and tell than most AAA titles on the market. It never outstays its welcome, and leaves the good problem of having its player grasping for more.

When Sony revealed the Vita, and detailed its full hardware specs, the industry was excited. It was promised to be the most powerful handheld device available, and many of us salivated at thought of what developers could conjure up with it. Games came and went, largely lacking the ability to show just how unique the Vita is. After almost two years of waiting, Tearaway is the game we’ve salivated for. It’s built from the ground up as a true Vita exclusive, and you’ll be hard-pressed to find a more engaging game for the platform. Tearaway blissfully strays away from industry trends, and satisfyingly exists in its own euphoric bubble. It’s a true creative gem.