Epic, action-packed, exhilarating, cinematic, intense, exciting and other such grandiose words are often used to describe video games these days. Whatever happened to fun? It’s the one word which more than likely got people into video games in the first place. Gaming is – at its core – supposed to be fun.

Rayman Origins is the epitome of fun gaming. It may not do anything new, and it may be ‘just another platformer,’ but boy is it fun. Is that all that matters in the current age of games or do we expect more?

Rayman Origins takes Rayman back to his roots yet still manages to improve upon a tried and tested formula of platforming gameplay. You run, you jump, you swing from vines and ropes just like the bazillion other platformers saturating the market, but it’s done with such beauty, precision and character that it’s almost impossible to not fall in love with it right from the get go.

The story is the first (and in the grande scheme of things, also the last) stumbling block for the title. It’s vague, feels incomplete and somewhat pointless. Rayman angers an old granny from The Land Of The Livid Dead with his excessive snoring and so she captures the Electoons of the planet and keeps them locked in cages scattered throughout the various levels, imprisons Betillia The Nymph and her sisters and unleashes Darktoons across the world, plunging the Glade into complete chaos. 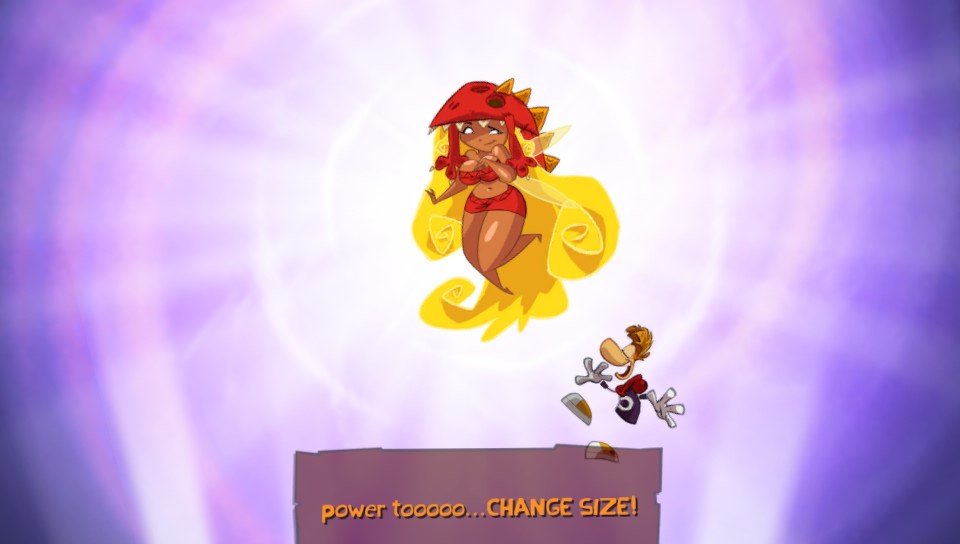 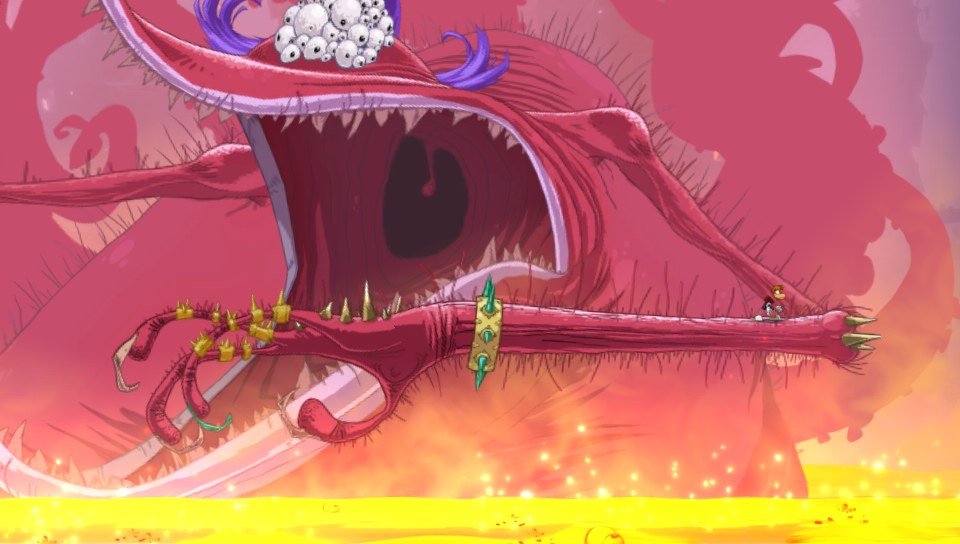 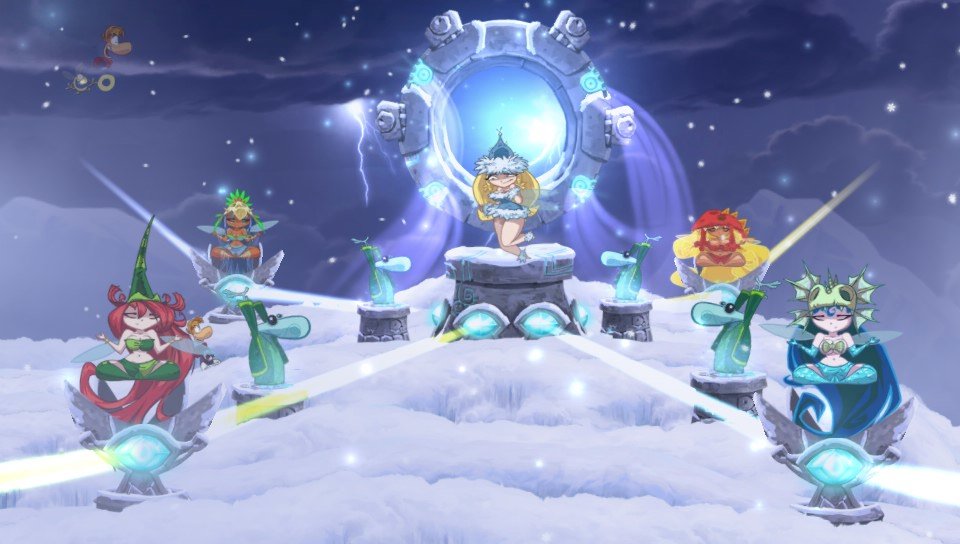 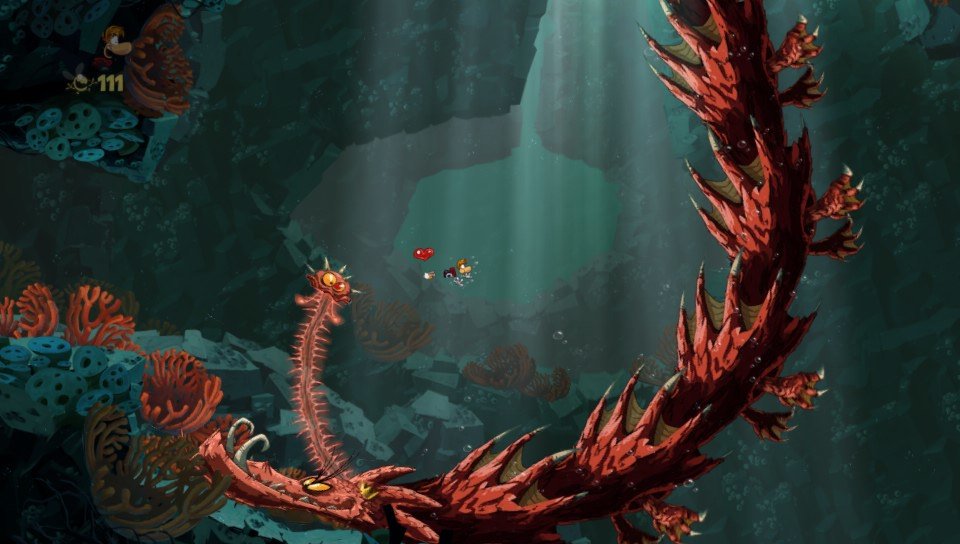 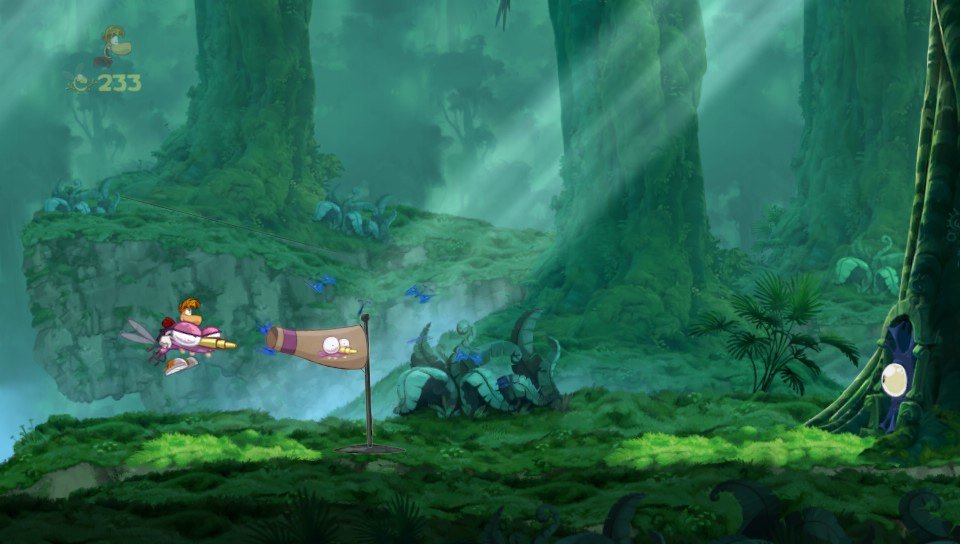 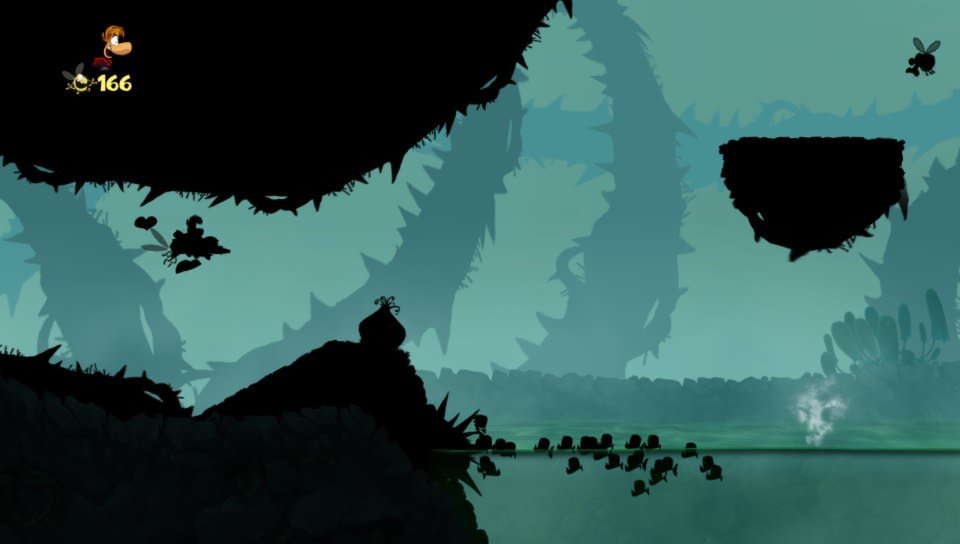 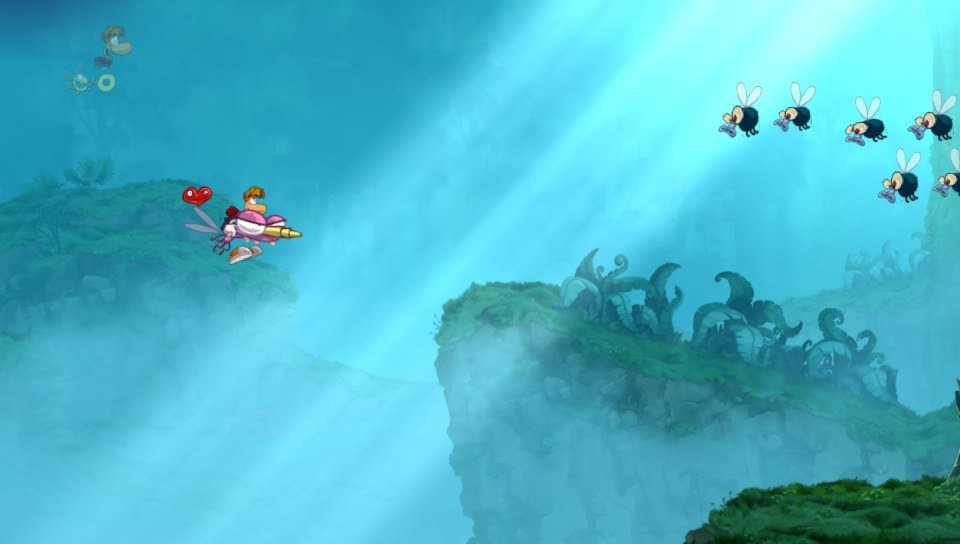 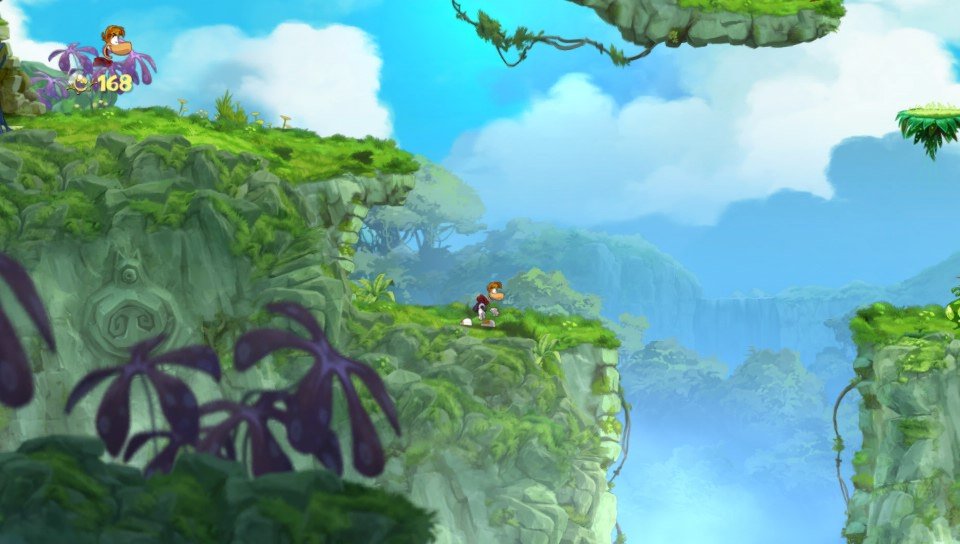 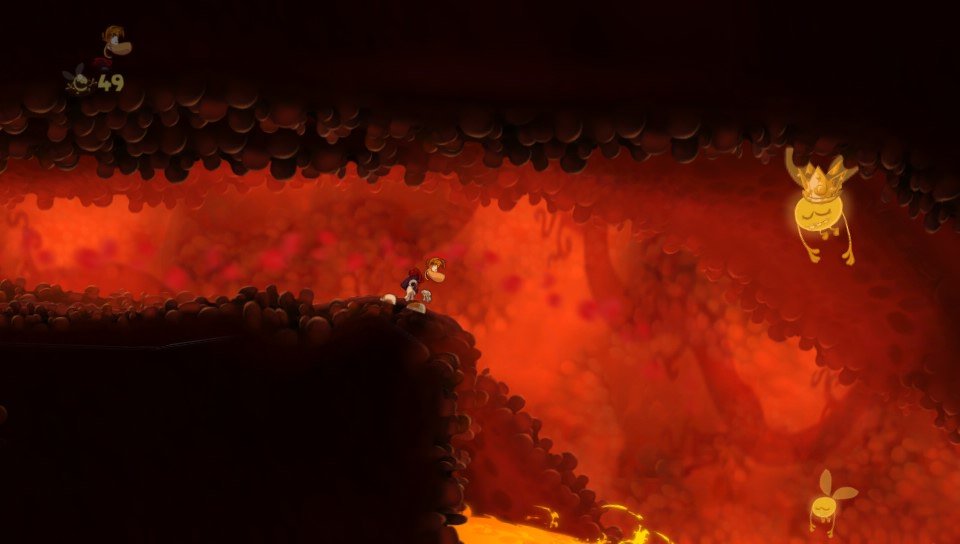 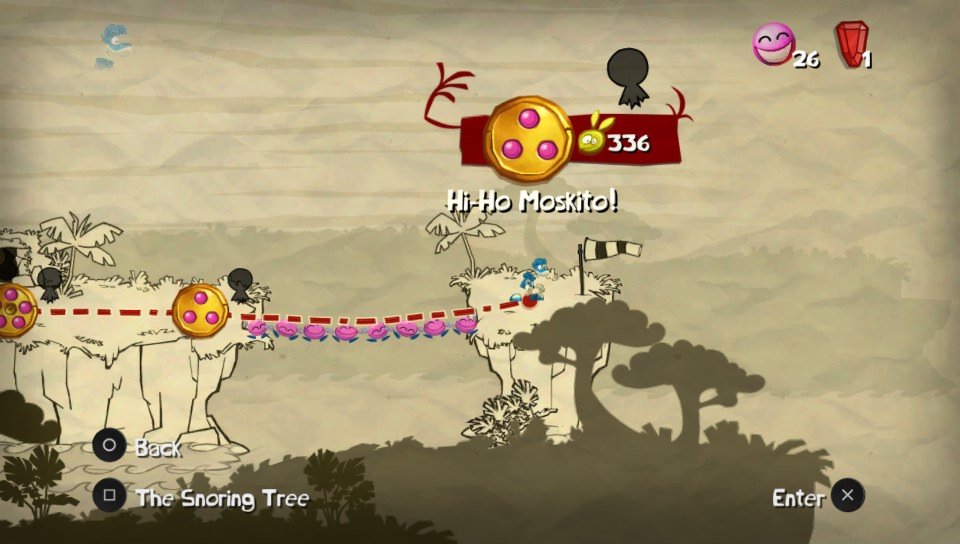 All of the above is briefly explained in the opening cutscene so don’t feel ashamed if you end up being a bit clueless in regards to the plot. That isn’t what matters here. It’s the gameplay that deserves your full attention.

Each level in Rayman Origins is both beautiful to look at and fun to play. The level designers have truly outdone themselves taking players through some of the best laid out levels I’ve have had the pleasure to play. It never gets boring or tedious, and the generous checkpoints keep the game clear from any frustration (or, at least, unintentional frustration). Lush green forests, snow covered ice caps, and even an underwater abyss are just a handful of locations you will come across on your adventure to free the Nymphs.

Make no mistake, Rayman Origins is one of the Vita's best games to date

The Nymphs play a big roll in keeping things fresh. Everytime you free one of these scantily clad fairies she grants you a new ability. Swimming underwater, gliding through the air, shrinking in size, and even running up walls will give the game a new lease of life just when things were starting to get a little bit repetitive. It’s not all platforming either. The shoot-em-up stages mixes things up a bit and are also genuinely fun to play. Riding on the back of a mosquito shooting baddies mid-flight is not only immensely entertaining but also helps keep the monotonal feeling to a minimum.

Boss fights however are a little lacklustre for my liking. They do little to invoke much thought and are simply a case of avoiding the predetermined pattern of attacks while taking every opportunity to strike the weak spots found in strategic places on said boss. A couple are memorable but the majority of them will be done and dusted long before you get a chance to catalogue it to memory.

Completionists are bound to get their money’s worth. Rayman Origins is relatively long for even a casual gamer but if you set out to unlock everything or even aim for the platinum trophy, expect to sink quite a lot of time into the game. Replaying each level to get all Electoons (think of them as Coins from Mario or Rings from Sonic), find all relics and beat each Time Attack doubles or even triples the playtime. Unlike its big brother on the PS3, the Vita version lacks multiplayer. It’s a shame, especially with the hardware being more than capable to deliver it. The Ghost Mode substitute is a good alternative but nothing can replace actual multiplayer.

Rayman is a nimble character and the controls do a great job keeping up with his flailing limbs (well.. hands and feet, at least). The Vita’s analogue stick is as responsive as it should be, and it needs to be; some of the later stages can get pretty demanding with the difficulty ramping up quite a bit near the end. Even after your 20th retry you won’t be able to blame the controls. You died because you messed up, not the controls. The touch screen can be used for popping bubbles (very useful for when an Electoon bubble has floated out of reach) and ‘pinching’ the screen is used for zooming in/out. It would’ve been great if the rear touch and tilt got some uses too but unfortunately Ubisoft decided to not incorporate them.

At its best the audio is simply amazing. At it’s worst it’s brilliant. Never once did the background music become irritating and, in fact, I found myself humming some of the tunes long after putting my Vita away.

At its best the audio is simply amazing. At it's worst it's brilliant

Sound effects were spot on too, and I particularly loved the language spoken by the Nymphs. It was English but at the same time also gibberish. Genius.

I did have some trouble with both the music and sound effects cutting out completely during the last few levels but I put that down to either a corrupted download or a problem with my hardware, purely because I saw no audio problems in any Youtube videos I later watched to compare.

Rayman Origins is exactly how a 2D side-scrolling platformer should be. Engaging, rewarding, stunningly beautiful, but most importantly… oh so much fun. The short 2-3 minute levels makes it a perfect pick up’n’play title for short commutes yet completionists (such as myself) will appreciate just how much this game has to offer. It may lack the multiplayer mode that the PS3 version enjoyed, and the story is idiotic and almost impossible to fully grasp, but make no mistake, Rayman Origins is one of the Vita’s best games to date.