Atlus has always been known to deliver niche JRPG experiences; games that don’t sell well but are critical darlings. They have plenty of exceptional titles under their belt such as Catherine and Shin Megami Tensei IV, but Persona 4 is quite possibly their finest work yet. The fourth entry in the Persona series originally made its debut on the PS2 back in 2008. The game was met with immense critical reception, so it was only natural for Atlus to port the game over to the PS Vita. What follows is a fantastic video game that has aged quite well and has shown to be the perfect Vita experience.

When it comes down to it, Persona 4 does plenty of things right. It’s a type of game that tries to be the jack of all trades and does exceptionally well mastering all of its features and offerings. You see, the thing about Persona 4 is, it should come out as being a cliché and incredibly niche Japanese title. It sports a cast of weird characters that all rock crazy haircuts. Its soundtrack is filled with J-pop. It contains traditional turn-based game play, and the story starts out incredibly slow; a staple in the JRPG genre. But the more you play Persona 4, the more you realize how original it is.

Persona 4 leads originality in its narrative. Like previously stated, the story starts out slow. The first 3-5 hours might seem a bit contrived and confusing. The players might find themselves grasping at something to care about; but if you stick around long enough the game offers up an incredible journey. You play as a high-school student who has moved to his uncle’s’ home at a rural small town, fresh out of the city life. You befriend a handful of students (who become party members), and you discover that a murderer might be on the loose in this quiet little town. Victims start springing up like flies and at the same there are a series of strange kidnappings. The way in which these crimes occur is the real creative draw of the game.

While trying not give away much, the narrative is filled with twists and revelations, some of which hit you hard and fast. There are a multitude of compelling characters; almost every single person you encounter is interesting enough to have their own little spin-off game. That’s how good the character development is in Persona 4. In this 60 plus hour adventure, you’ll experience plenty of heart touching and memorable moments. Some of them are beautifully subtle, some are amazingly bombastic; but all are truly crowning achievements in Japanese storytelling. 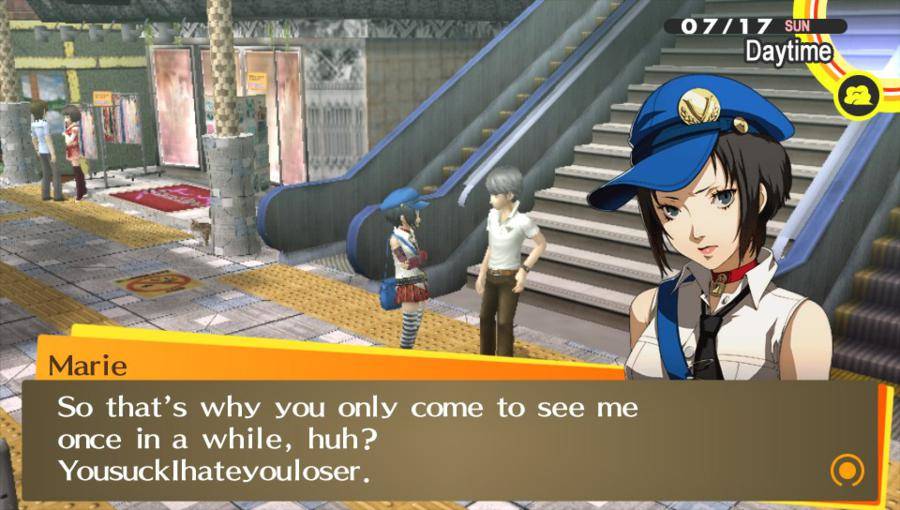 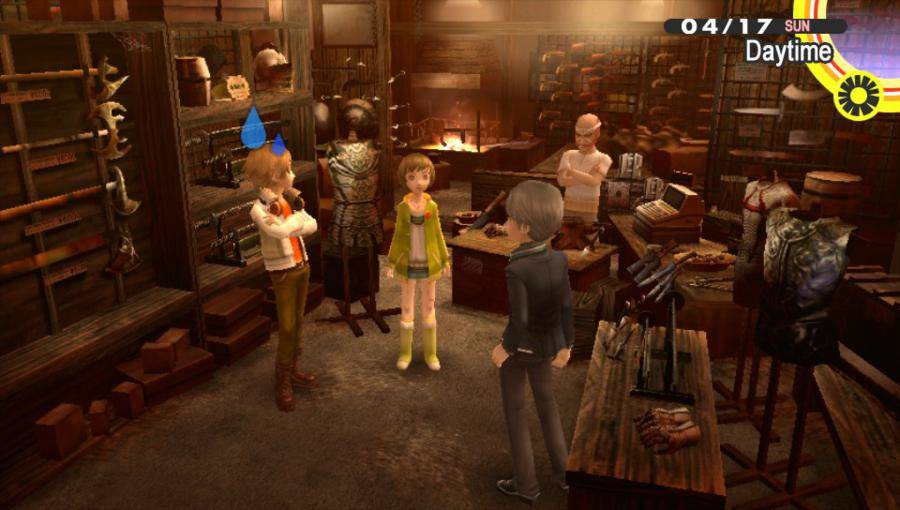 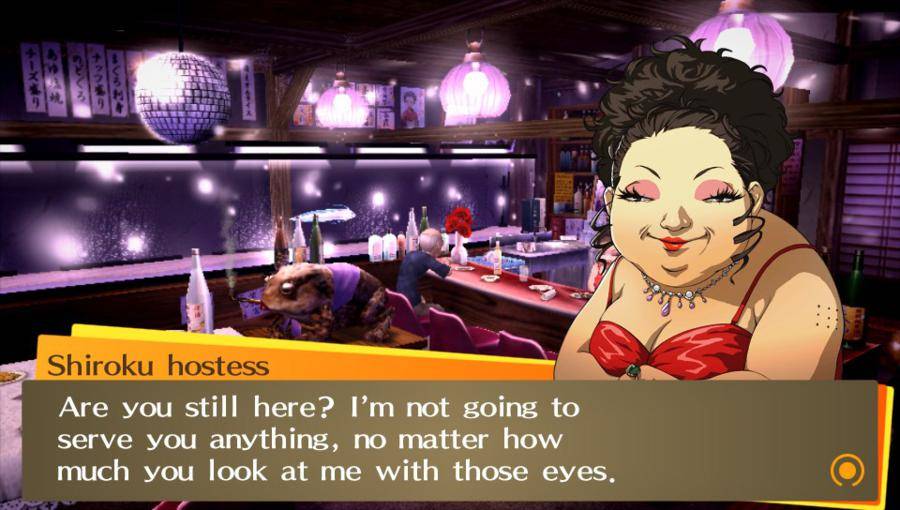 And that’s what so terrific about Persona 4; it isn’t cliché or corny in anyway. Every single piece of dialogue, every single cut scene, every single moment of character development feels fresh and organic. Atlus really nailed how these characters interact with each other; they feel like real human beings. Not some clownish cast that go out of their way trying to make you feel sorry for them. I can go on and on heralding the story, I’ll just conclude by saying it’s amazing.

Persona 4 is a large game; it’s huge in quantity and especially quality. The game takes place in a small rural town, so there won’t be any astounding settings to visit, sadly. But what Persona 4 does great is it provides a vast amount of content to experience in this small little town. You can easily lose yourself with the amount of side quests you’ll be doing.

The game features a social link mechanic. What this does is it enables you to interact with a handful characters and offers you the chance to tighten up your relationship with them. It is almost something like a social simulator, straight out of a Sims game. You start out with the lowest possible relationship rank with each character, but as the school day passes and free time is available, that free time can be filled up by talking to a character of your choosing. This enables you to rank up your relationship with them, and thus providing deeper game play options on the battlefield.

This segues into the battle system in the game. At its most basic core and function, it is your typical turn-based JRPG. You can have up to four different party members and each take turns attacking, healing, etc. But where Persona 4 shines is its, well, Personas. Each party member has the ability to summon their very own Personas, almost like Pokemon but a lot more brutal and less cute. Each member’s Persona has their own strengths and weaknesses, which in turn directly affect how strong or weak a party member can be. For example Chie has a Persona that is strong in ice attacks but is weak in fire. This in turn will make Chie weak to fire and strong with ice.

Each party member has only one Persona with the exception of you, the main character. You can collect a plethora of different types of Personas by defeating enemies which can drop Persona cards. These cards can be used in battle as your very own Persona and will affect your fighting style. You can also combine cards to create even more powerful Personas. This provides an addicting card collecting mini-game and adds a whole extra layer of game play content. The Persona system is compelling and allows for some smart and fun strategic battles, especially with the game’s grueling boss battles.

Besides exploring the town, you have a variety of dungeons to fight through as well. You can also collect books, date other characters, watch a movie, find a job, eat food, and do plenty of other wonderfully addicting things. The game is pretty long, taking me over 60 hours to complete. It also contains several different endings, adding replay value.

It Looks Good, Sounds Even Better

Persona 4 looks fantastic on Vita’s OLED screen, especially bearing in mind that the game is five years old. While it isn’t an Uncharted in the video department, it still has its fair share of charming visual fidelity. I loved the art style, the design, and anime drawings. The game also boasts cut scenes in the form of anime, and all are beautiful to look at. There are a good number of them, and all are spread out in a smart way.

The soundtrack is utterly brilliant. It contains a great deal of J-pop, but all of it is actually good. The songs aren’t annoying and some are absolutely astounding. The battle themes are epic, the dungeon music is easy on the ears, and boss battle themes are some of the best around. The voice-acting is top notch as well, with no exceptions.

The Vita version of Persona 4 boasts some extra new features. You have a brand new character to interact with, a few more dialogue options and cut scenes, and a dungeon rescue system. The content isn’t anything game changing but it does complement an already fantastic game.

Atlus is a great company that almost always offers fresh and new experiences. Persona 4 is no exception, as it is perhaps Atlus’ finest work. It’s a great starting point for people trying to get into JRPGs, and it is great offering for veterans as well. It contains heaps of content, all of which is fun and addicting.

The story is original, touching, and incredibly good. The soundtrack is amazing and the gameplay is deep. The opening hours might be a little too mundane, but that isn’t enough to taint Persona 4. Go buy and play PS Vita’s finest video game.