The original Coconut Dodge, released as a PlayStation Mini in 2010, is one of only a small handful of games that I’ve rewarded with a 10/10. At a time before FuturLab became the Sony darlings they so deservedly are today, they were just another developer vying for attention on the Minis platform and in Coconut Dodge they made a game that was not only so much better than almost anything else on the platform, but that was so much better than it needed to be. They’d gone above and beyond, taking a simple idea and creating perfection.

Revitalized, a remake of sorts for the Vita, is as good a game as it ever was, but the lack of the substantial changes that made Velocity Ultra a must-play, plus the lack of any additional content, is more than a little disappointing.

Coconut Dodge really is simple. You control Clawence, a little red crab who’s lucky enough to find that it’s raining treasure. It’s your job to grab the vast amount of gold and diamonds while avoiding the heavy coconuts. If a coconut hits you, you lose one of your three lives.

You can move Clawrence left and right along the bottom of the screen, while items fall from the top. It’s not a new idea, but it’s handled so well in Coconut Dodge Revitalized that it feels fresh. This is partly thanks to the mazes, which have you pushing your fingers to their max. 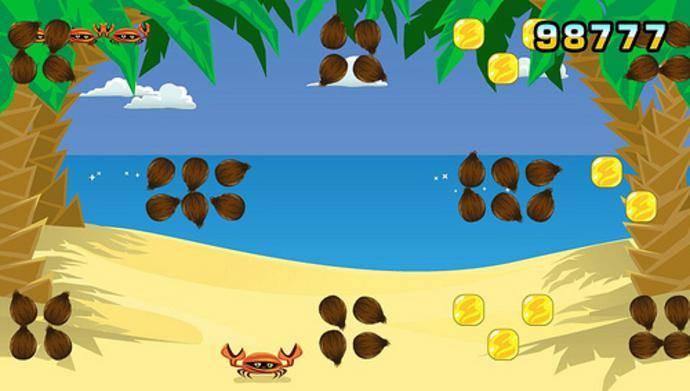 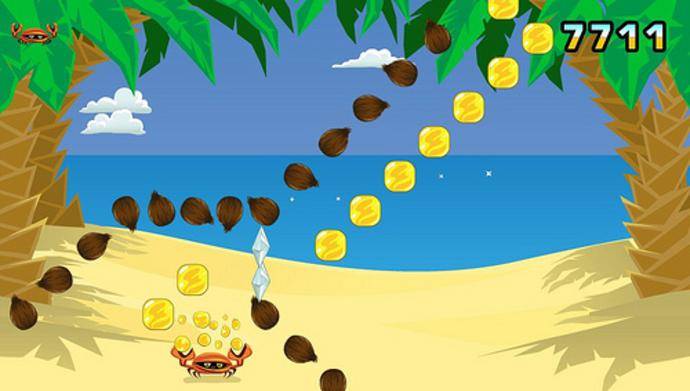 After a short while dodging coconuts, you’ll find yourself coming across a more structured area. The same rules apply – dodge coconuts, collect treasure, stop bonus balls from falling – but the more organized nature means you have to move to a certain location by a certain time. It’s fantastic to “learn” a maze, and it’s incredibly satisfying when you master one that’s been giving you trouble. A lot of this is about muscle memory and learning from your mistakes and there’s rarely a feeling that a given layout is just “hard.”

The main “campaign,” if you will, has around 30 levels, and once you lose all your lives you’ll be forced to begin again. This isn’t really a problem, because although the early levels can feel rather slow there’s never a point where you might start feeling over-confident. Things are structured in such a way that even if you master each of the mazes, a random coconut drop could easily stop you dead in your tracks.

Aside from that, there are a few other modes. Maze Master allows you to just run through the hardest mazes, learning where the diamonds are. There’s also a low visibility mode which makes falling objects black, and it’s not always easy to tell what you’re grabbing. They’re interesting takes on the theme, but aside from Maze Master, probably won’t hold your attention for nearly as long as the main game itself.

The new additions to Revitalized – trophies and online leaderboards – are nice to see. The trophies aren’t especially involved, and although they offer new incentive to get through the last maze without losing a life, you’re unlikely to feel the need to go too far out of your way. That’s not a bad thing, as I feel the leaderboards are really the more important element here.

Coconut Dodge is a game build around scores, and beating other people, and although it was possible to do with the original version, that has been made a million times easier with the addition of online leaderboards. It adds a new element to the game, but how much fun that element is depends on how much you care about beating random strangers and how many friends you have that are playing. For the record, I’m currently around the 70 mark and that’s where it gets quite competitive, so expect a run for your money if you’re interested.

Coconut Dodge has one of the most addictive theme songs of all time. After over a year and a half of avoiding it, Revitalized forced it back into my head and my girlfriend and I have taken to humming it out loud without really realizing it. It’s not an outright listen-able song – it’s not the sort of thing you’d put on in the car – but once you’ve heard it you’ll never be able to unhear it, and I mean that in the nicest way possible.

Graphics are much sharper than in the original version, but considering the level of the design that’s not really saying anything. While the difference between Velocity and Velocity Ultra was huge, the difference between the Mini and Vita versions of Coconut Dodge is largely “everything is bigger and more defined.” That’s vastly oversimplifying the changes that have been made, but when a game consists of a crab, some coconuts and a score meter, the graphics only need to be so good before you don’t even seen the improvement.

And that’s my biggest complaint about Revitalized. It’s the same great game, just for Vita. The same, arguably, could have been said for Velocity Ultra, but the added controls and smoother gameplay made it feel like it was worth replaying, that there was value for those looking to double dip. Coconut Dodge doesn’t feel any different to the original, and this time it’s only the low price and leaderboards that really makes up for that.