Legendary designer Keiji Inafune has dabbled in macabre video games before. He’s most well known for co-creating Mega Man, but he also has Resident Evil, Onimusha and Dead Rising production credits under his belt. Since leaving Capcom, he’s decided to dive back into darkly atmospheric game design with his latest project, Soul Sacrifice.

While it’s obvious that Inafune and the rest of his team had a vision for this Vita exclusive, it doesn’t quite work and fails to live up to its pretentions.

I was immediately intrigued by Soul Sacrifice’s opening. The protagonist is held captive by a sorcerer named Magusar. Their prison is a cage made of bones in an evil underworld, and their cellmate is a talking book named Librom. The book’s pages contain the memories of a sorcerer. By revisiting these memories, the protagonist gains this unknown sorcerer’s powers so that they can defeat Magusar and escape his prison.

The book isn’t just the stage select screen, either. Librom is also the primary menu that lets the player create their character, customize their spells, and is stuffed with all kinds of lore. While the lore can become convoluted, this is a solid concept that works very well with the setting. 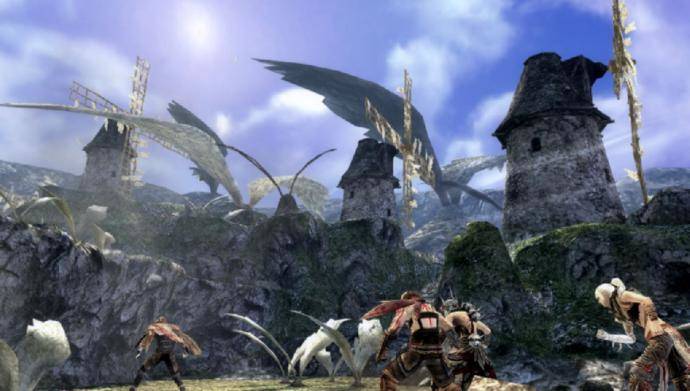 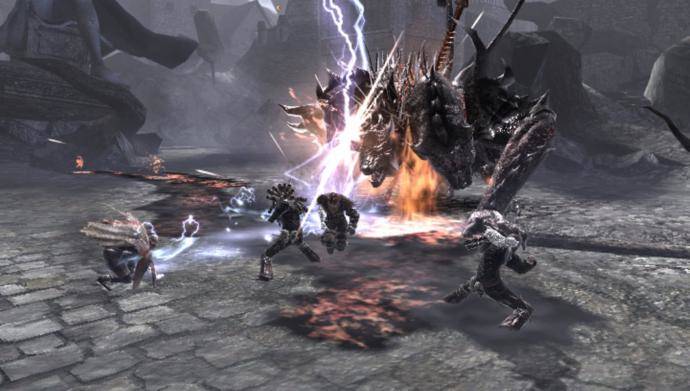 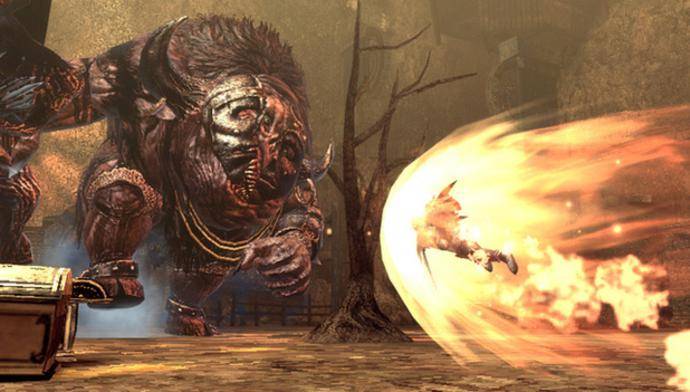 Despite this novel premise, however, Soul Sacrifice quickly shows its flaws once the action begins.

The gameplay comes fast and furious from the onset. Combat is hectic and numerous enemies have to be engaged at the same time. Immediately during the first battle, tips are thrown at the screen highlighting some of the game mechanics. This is a weak tutorial, though, as virtually nothing is explicitly explained. After clearing the initial stages I was given new spells (called “Offerings”) and Sigils to use, but not much description as to how to use them. It eventually all comes together, but that requires sifting through Librom’s pages to truly understand what to do.

Basically, the crux of the gameplay is designed around character customization. Combat is done using Offerings that come in various elements and forms, such as weapons, shields and projectiles. Player stats are upgraded by using Sigils and by sacrificing fallen enemies or allies. All of this provides depth, but this depth comes with some pretty major problems.

At times I felt the combat worked, but just when it hinted at the notion of fluidity it became mired in redundancy and stiffness. Summoning one of the six Offerings I equipped my character with became a lesson in patience and disrupted any enjoyment I might have briefly found. Some of the weapon summons felt mildly comfortable, but this is a game that requires constant spontaneity. Normally I appreciate complex combat tactics, but here it was slow-going and sloppy due to how long it can take to switch and cast spells. Also, there’s no “jump” button – I cringed every time I had to fight a flying foe.

Then there are the sacrifices, which serve as the leveling system. Depending upon whether souls are sacrificed or saved has some effect on character stats; sacrificing aids combat, saving aids health. It also has some bearing on how the narrative unfolds. The changes to the character aren’t that apparent however, and the game seems to be more geared towards sacrificing than saving. Yes, at its core, Soul Sacrifice is all about grinding.

The Offerings and, to a lesser degree, sacrifices are the key to actually being able to finish the game and defeat Magusar. However, this requires constantly replaying prior stages in order to farm Offerings so they can be upgraded either by a fusion system or by boosting the amount of times they can be cast. Indeed, the Offerings do break if they’re used too much, but they can be restored by using Librom’s tears which are collected between battles.

I really didn’t find this to be fun or intuitive, though. It seemed to me that many of these Offerings were relatively pointless and required too much trial-and-error. To make things worse, the stages and battles quickly become stagnant.

The level design is pretty uninspired. Most of them are either a desert, ruins or wasteland. Despite how visually detailed some of them can be, most stages get old quick due to how small and samey they are. I noticed that there seemed to be only a few different kinds of monsters, as well. For a game that wants to be deep, this lack of variety hurts, and the worst part is that this backtracking is pretty much mandatory to be able to take down the insanely tough (and cheap) bosses.

The gameplay becomes a little more enticing when played with a friend, but it’s still a trudge through repetitive levels and monster slaying. Worse, the primary campaign can’t be tackled cooperatively, and instead the multiplayer is relegated to separate stages that are even more monotonous. Honestly, the entire game feels more like an endurance test than anything else, and an unrewarding one at that.

In some respects Soul Sacrifice is one of the better looking games on the Vita. The monsters are big and grotesque, the spells look fantastic and some of the stages have a surprising amount of detail. It’s just a bit unfortunate that many of the monsters are reused throughout the game (even the bosses), and that some of the stages are completely lackluster in terms of appearance. Overall, the graphics do a good job adding to the atmosphere, but they could have used some more flavor.

The sound is good, as well. The score is serviceable for the setting and all the sound effects bring the action to life. The voice-acting is perhaps the best part, though. The narration really helps enhance the dark themes and enriches the story, and Librom’s voice-actor does a fantastic job delivering the book’s smarmy dialogue.

If the combat system was focused and the grinding paid off, then Soul Sacrifice might be the game it wants to be. The narrative, lore, premise, setting and tone are presented well enough, but they are not enough to make up for the game’s shortcomings. As it stands, Soul Sacrifice is a humdrum experience that offers no incentive to keep playing.