Penguin Party is a new PlayStation Mobile title available on PlayStation certified devices and Vita, and although a lot of core gamers will dismiss it based on its design and content, the child-friendly visuals and anthropomorphic penguins hide what’s actually quite a challenging puzzle game, and a title in the same vein as old favourites like Chu Chu Rocket.

The party was all set up, but a group of no-good sharks decided it would be a good idea to come and steal all the balloons. It’s your job to not only recover the balloons, but to get through dozens of levels and arrive at the party as well. To do this, you’ll need to be able to dodge sharks and deal with a limited number of directional changes. Getting 100% will be surprisingly challenging.

The basic gameplay is fairly simple. Penguins will leave their igloo and travel in a straight line from there. If they hit an obstacle – a wall or block of ice – they’ll turn back on themselves. Each level has a set number of arrows which you can use to change the direction of the penguins that touch the arrow, but you’ll need to place them strategically if you want to collect all the balloons and get each penguin safely to the end of the level.

This gets more complicated with the inclusion of other sorts of arrows, blocks that need to be pincered by two penguins to break them or the ever dangerous sharks. These add an element of timing to your planning, and you need to ensure that not only do you pick everything up, but that the right penguin is in the right place at the right time. 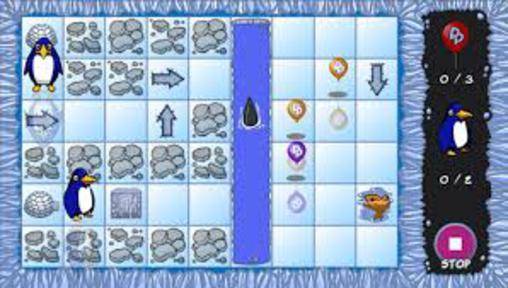 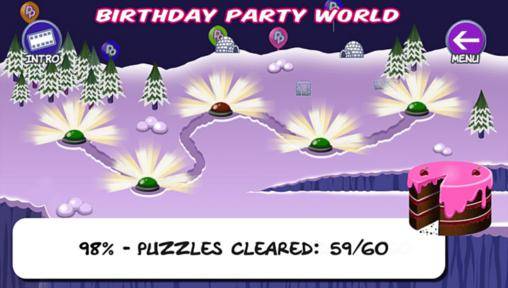 As you progress through the levels, things get gradually harder and you’ll need more time planning each of your moves. This can mean sitting and staring at a static screen for minutes, waiting for the solution to present itself, but when it does, it always feels rewarding. This becomes more true the more you play, from the rather slow tutorial through to the game proper.

Both visually and in terms of the audio, Penguin Party is a very basic affair. The graphics do their job, but no more than in a flash game of a similar nature. The audio, similarly, is there because it needs to be, and doesn’t do much to lift the experience.

Penguin Party is a challenging, enjoyable brainteaser of a game that fits the PlayStation Mobile platform perfectly. A level can be completed in minutes whilst on a bus or on a lunch break, and the basics aren’t so complicated that you won’t be able to come back to it after months away. The important thing is that it manages to be fun whilst also providing a challenge. It’s only its chosen subject matter that might end up putting off those who would rather be solving puzzles with zombies than with cute little cartoon penguins.

Available for free and offering no pressure on the player to complete it in a given time scale, Penguin Party is something that almost certainly deserves to be installed on your PlayStation Vita.