Uncharted: Golden Abyss was the first game shown on the Vita, and with good reason. The graphics are excellent – not a million miles away from what we’ve come to expect from the PS3 entries in the series – and the gameplay just seems to scream “look, the Vita can do it as well.” All of the attitude, humour and gameplay favourites return from the home console iterations of the franchise, so all in all, Golden Abyss should be at least as good as the original Drake’s Fortune.

Unfortunately, somewhere along the way, something went wrong.

Golden Abyss is a prequel to Drake’s Fortune, although there’s really no connection asides from characters. In terms of gameplay, it’s much more akin to the original game than it is to Among Thieves and Drake’s Deception. It’s more about exploring jungles and ruins than perhaps the more action-based set-pieces of the later games. Depending on your attitude to how the series has evolved, this will either be the best thing that has ever happened to the series or a massive step back. 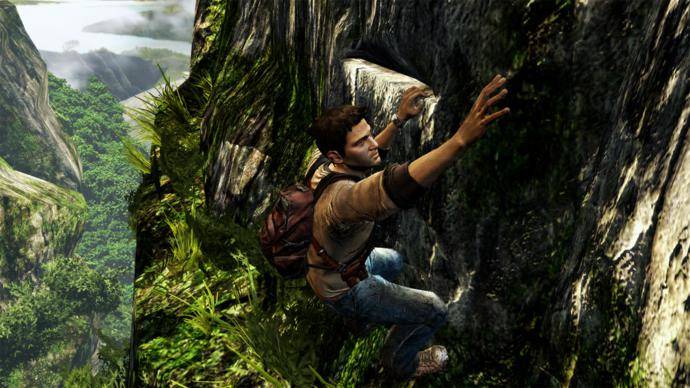 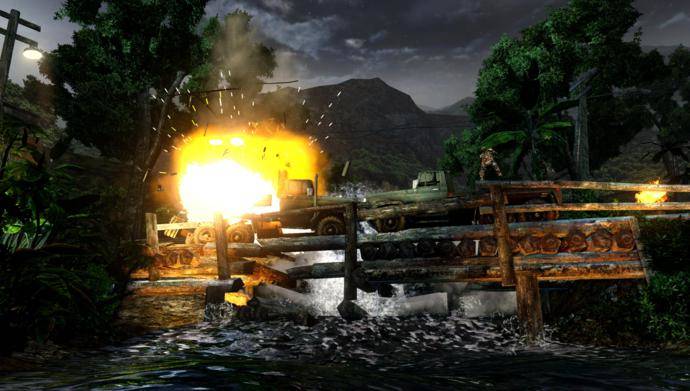 Whatever your attitude, it’s hard to argue that Golden Abyss is anything but a full-fledged member of the Uncharted family. All the main elements are there: impossibly dangerous platforming (made easier by the inclusion of touch screen controls), cover-and-peep shoot-outs, treasure hunting and hilarious Nolan North quipping. Along with everything you’d expect, there’s the inclusion of the aforementioned touch controls, which you’ll probably abandon in place for controller alternatives, and occasional slide puzzles, which again use the touch screen.

The combat is as hectic as always, getting ridiculously difficult at times, whilst the motion control allow you to aim slightly more accurately than before. Surprisingly, it’s a feature you’ll miss when you head back to the PS3 games. The controls can be a little loose at times, although for the most part, you’ll die because you haven’t reacted quickly enough or because you’ve taken a chance when it came to running out in front of a enemy with a shot gun.

For the most part.

Because although Uncharted: Golden Abyss manages to bring much of the charm and quality of the console games, it also manages to be incredibly glitchy. Segments that require you to move quickly are often broken to the point where you’ll swear, and sometimes there are platform sections that just don’t work. When you’re getting shot at from a fixed gun and Drake seems dedicated to jumping out in front of said gun for no reason other than you’d pressed up at the wrong time, There are moments that are so frustrating – especially on the higher difficulties – that you will sometimes question working to get past a particular part.

And in fact, the trophy list is perhaps indicative of how frustrating the game is as a whole. Getting the platinum will require you to play everything multiple times, as well as collecting randomized bounty items.

Of course, the visual style of Golden Abyss is mostly top notch. At a brief look, it rivals Drake’s Fortune. When you look a little closer, things are a little rougher than that, with a few more jaggies and less detail, but for the most part everything is as good as you’d expect. The only thing that really looked ugly were the bullets as they hit solid surfaces. It looked like a sprite animation borrowed from the SNES era and went a long way towards breaking the immersion of an otherwise decent looking game.

The audio, however, is hard to know. The voice acting is top notch, the characters brought to life by performers at the top of their game. The music, too, is largely in the same vein as the console titles, and supports the action and drama as you play.

If nothing else, Golden Abyss proves that future Uncharted titles on Vita could be something really fantastic. All the elements are there to show how much potential Golden Abyss had. It’s just a shame that it didn’t quite manage to live up to that potential. While it’s still a worthwhile play, it’s in no way as tailor-made as Gravity Rush and it suffers as a result.