There seems to be quite a comment dislike of touch screen gaming. Whether it’s justified or not, or how experienced those that repeat the tired old complaints are with the input method, I’m not sure, but even the most die hard detractors must realize their are exceptions to the anti-touch rule. Draw Slasher might be one of those exceptions, for while it’s not perfect, it manages to entertain and challenge without ever feeling uncomfortable or annoying.

Draw Slasher puts you in the role of a ninja who, after returning from ninja summer camp, discovers that his village has been burnt to the ground by Zombie Monkey Pirates. The story progression and enemies you come across are often very funny and about as crazy as you’d expect from any game with ninja camps and Zombie Monkey Pirates. 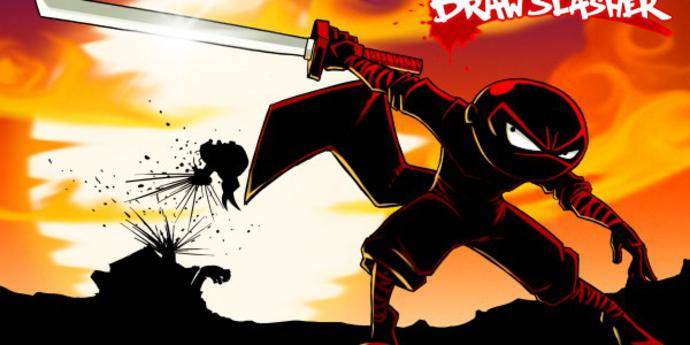 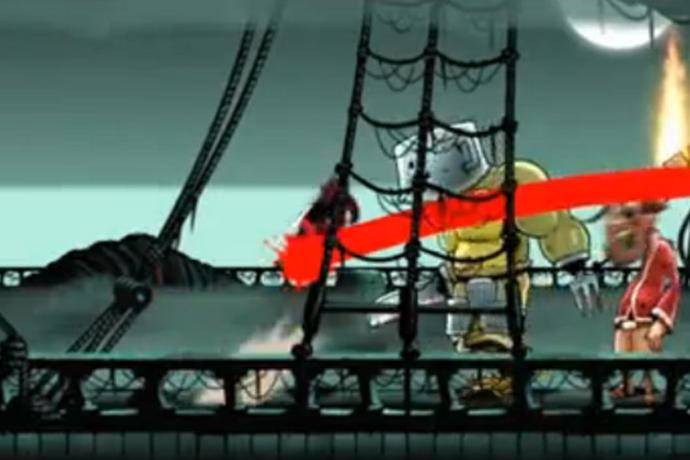 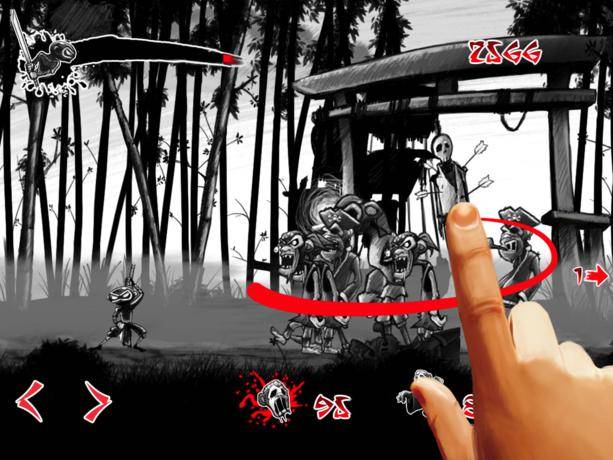 Your first concern is probably over how well you can control your character. The majority of the time, Draw Slasher controls incredibly well. You can move Hanzo – described as a rather short ninja – just by tapping on the screen, or if you draw a line, he’ll follow in a quick slash. The latter allows you to attack enemies as well, although it can also be used to dodge or travel from place to place slightly quicker.

The level design pushes each of your abilities to the max. There are levels where you must dodge fire balls, or use exactly the right timing to avoid traps. These are often the levels where the controls start to show their weak spots. Although it’s always the player’s fault for a mistime, it does sometimes feel Hanzo takes your “slashes” rather literally. If I draw a straight horizontal line, he’ll stand directly below where I began drawing and jump up, instead of jumping for the horizontal line. Changing this would make the harder bits, specifically those bits where timing is incredibly important, and make it feel “fairer.”

Other levels simply have different enemies to fight through. There are a number of different opponent, each of which require a slightly different approach. Whether hiding in barrels or attaching in full armour (in which case, a single chink exists which you must accurately attack), you’ll need to concentrate on your slashes lest you over-draw and end up delayed and attacked by zombies. Some of these enemies are simple to kill and feel a little repetitive, while others take too long and you’ll dread their every appearance. The balance here is constantly a little off, but rarely enough to actually make you stop playing.

At the end of each set of levels, you’ll come across a boss. Each boss is completely different and often fairly easy to work out. Actually doing what you need to do to kill them is often harder than actually killing them, and even the very first boss will require quick reflexes. These range from challenging-but-fun, to overly long, again a balance that never quite manages to sit right.

There are RPG elements – you level up your health, the length of your slash and various abilities that you unlock along the way – but these seem a little tacked on, as if to make it more than just slash, slash, slash. They’re not a hindrance in any way, shape or form, but it doesn’t feel like the game relies on you using them either.

The voice work in Draw Slasher is excellent. Although all seemingly done by one or two people, it’s done in an almost self-referential way and it works very well. All the lines are delivered incredibly well, and you’ll get more than a few laughs out of the dialogue. The music as well, although a little obvious, really builds on the dialogue and on the world.

Graphically, although stylized, Draw Slasher really comes to life on that beautiful OLED screen. Animation is smooth and colours are rich.

Overall, Draw Slasher manages to surpass all expectations as a touch screen game, especially on the Vita (which most people, obviously, bought for its controller-like interface and higher-end tech). There are very few problems with the UI itself, but the level design occasionally feels lacking, either because enemies feel cumbersome to fight, or because you must repeat the same thing so many times. In a more expensive game or in a game designed for more constant play, this might build into something far worse than it appears in Draw Slasher, but for less than a fiver, you can’t go wrong.