One of the biggest problems with Puppeteer, at least in my experience, is that people go in expecting it to be a lot like LittleBigPlanet. Some people I’ve spoken to about it have dismissed it entirely, thinking that is had been developed by Media Molecule. That crowd cheers and changing sets make up a huge part of its aesthetic mean that some are quick to point out the similarities.

In some ways this is justified. This isn’t a traditional platformer. It isn’t Donkey Kong, Mario, Sonic or Rayman. Puppeteer is a dark fairy tale, a more paced story-driven adventure than an action platformer.

So story-driven is it that there are times that you might call it slow. People talk, a lot, and sometimes the only thing separating two long sections of dialogue is a small walk to the left and maybe a jump or two. For this reason, the opening levels can grind a little if you don’t fall in love with the style.

When the conversation stops and it's time to jump around, it's just not that fun

And you may just do. Theatrical is the word I constantly see Puppeteer described as, and it’s been done on purpose. The whole thing plays out as an oversized puppet show, every slice of action confined by the stage. It’s impressive not only the lengths the developers have gone to to maintain this theme, but what they’ve been able to do within it. The creators have not been limited by their own limitations, a contradiction in terms, but one that makes perfect sense when you’re playing.

The Witch projects to the back of an imaginary audience, while your cat sidekick makes meow-puns that bring the house down each time. The main boss exaunts at every opportunity and enemies pop up from the front of the stage. If there was a typical stage show, encompassing everything from Shakespeare to pantomime, it’d be something like Puppeteer. This IS theatre. 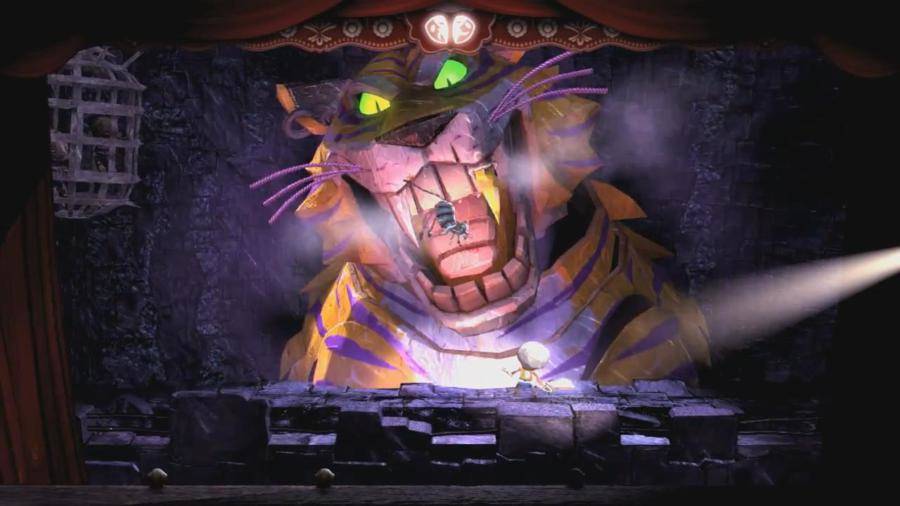 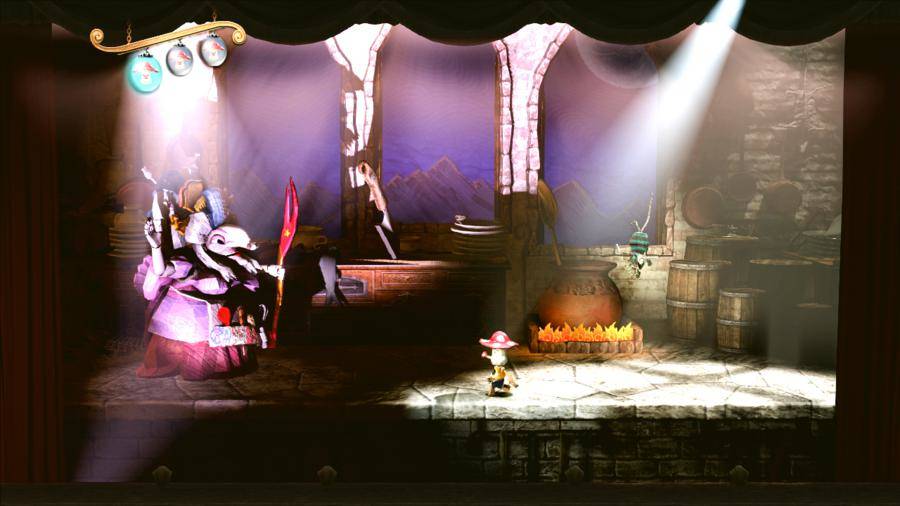 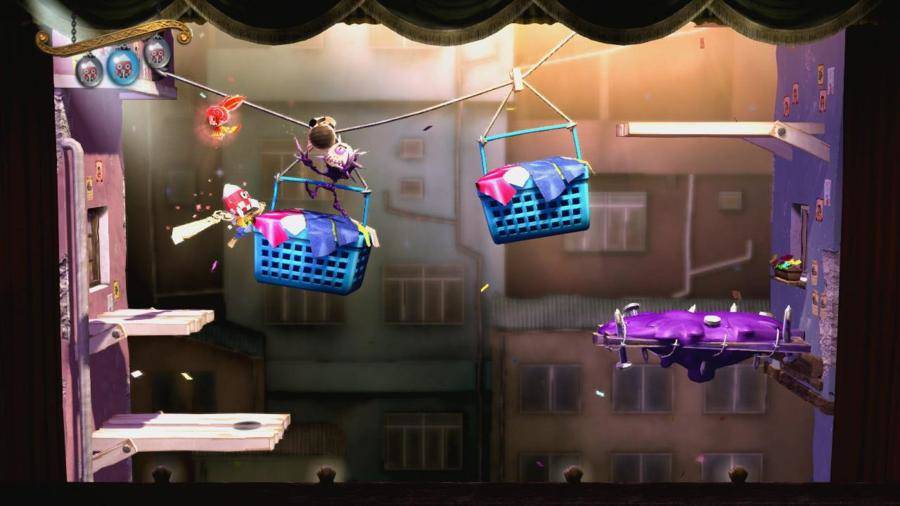 It’s an atmosphere that’s utterly unique and instantly charming. Even within the gameplay itself, this uniqueness remains obvious, and for the most part it works. Whether you’re zipping along a seam, cutting paper bats or defending yourself with a magically-imbued shield, you’re on an adventure unlike anything else you’ve ever played.

When your lives are measured in wearable heads (you can carry three, and will die if you lose all of them) and your platforming is occasionally interrupted by a point and click puzzle (the flying cat will be your ‘point’), you know you’re in for something completely different.

This is made most obvious by the way that your adventure progresses. Each “set-piece” takes place on a small stage. Once you’ve done everything you need to do, you’ll go through a gold exit portal and be transported to the next set. Sometimes this is right behind your current set.

If you want a full-on platformer, it might be worth looking elsewhere

It’s an interesting way of handling the screen-to-screen style of platforming, something that has long been neglected since hardware caught up with the ability to have scrolling screens. It works really well.

Sometimes structures can revolve, meaning you won’t always see everything on screen, and other times you’ll uncover new locations and bonus screens. All within a small stage. It’s stunning at times.

But for everything that Puppeteer does right, there’s one major flaw that’s hard to ignore. When the conversation stops and it’s time to jump around, it’s just not that fun.

A Barrel of Laughs

That’s not to say that it isn’t funny, or that you won’t enjoy your time with it. It’s just not the sort of platformer that stands out. Whereas the likes of Mario have you timing jumps and mastering controls, Puppeteer pretty much spells out the solution to every problem. Abe’s Oddysee had difficult puzzles, Puppeteer has you reacting to similar things time and time again.

The script is good, at least so long as you get the context. The world is meticulously planned and built with a care and love completely devoid from most modern games. But the actual gameplay is very limited. Clever and different, yes, but limited.

Puppeteer is one of the best games of its type. It's full of laughs, something few games manage, and the setting and design are second to none

Maybe you don’t mind. Maybe anything that manages to be new and unusual is enough in that aspect alone to make up for any shortcomings the title may have. If that’s the case, Puppeteer is a must-play. Go and buy it, next chance you get. But it’s not a perfect game by any means. The pacing feels off, perhaps because of the amount of “character” on offer.

As a result, you’ll never really be challenged. You’ll breeze through, perhaps smiling the whole time, and then you may never touch it again. There won’t be much reason to return. Even the collectables are fairly blatant most of the time.

Now in all fairness, Puppeteer is designed with children in mind. There’s a two player mode so that you can play with your kids, and it’s an excellent chance to have them play something that isn’t necessarily kiddy, while still being suitable.

So perhaps it shouldn’t be surprising that it’s more interactive stage show than it is game. You won’t struggle, you’ll just enjoy the journey. If that’s what you’re expecting, you’ll probably be unable to find too many flaws. If, on the other hand, you want a full-on platformer, it might be worth looking elsewhere.

Puppeteer is one of the best games of its type. It’s full of laughs, something few games manage, and the setting and design are second to none. I can genuinely say this is something I’ve enjoyed. There’s no pretence of bravado, no angry storyline or dozens of deaths. It’s a fairy story, set on stage. Who’d have thought that such a thing would come in the form of a video game, and that the voice work and visuals would be strong enough to actually have it work?

It would have been nice to see something a little stronger from the actual gameplay, something completely out there to match the story. Maybe if there’d just been more gameplay and less world-building? It could have been perfect.

In some ways, it already is.