Solid Snake returns, although this time he’s older, more world-weary. Years of fighting the patriots, of being lied to at every turn have had their toll, and his body’s increased ageing have made him grey before his years. None of that matters though: he’s about to embark on his hardest mission yet, a mission that will test the limits of his physical and mental strength and that will, hopefully, let the old soldier rest upon completion.

Friends and enemies will return, story will wrap up and, for a hardcore Metal Gear fan, tears may be shed.

Liquid Snake – still in the body of Ocelot – has surfaced in the Middle East and there’s only one person who can take him down. With the might of the PMCs under his control and the ability to mess with nanomachines (which now link soldiers together for smoother combat), he’s practically unstoppable. Snake embarks on one final mission. 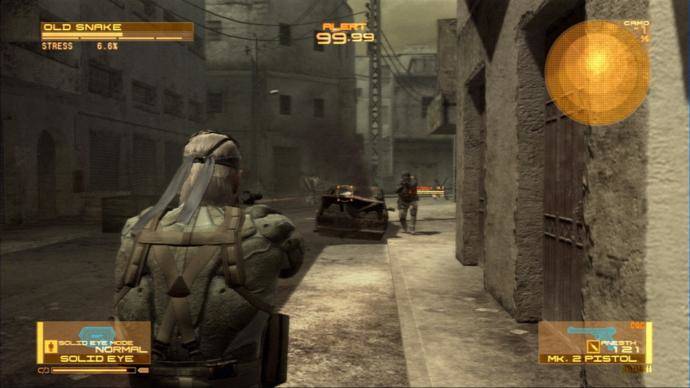 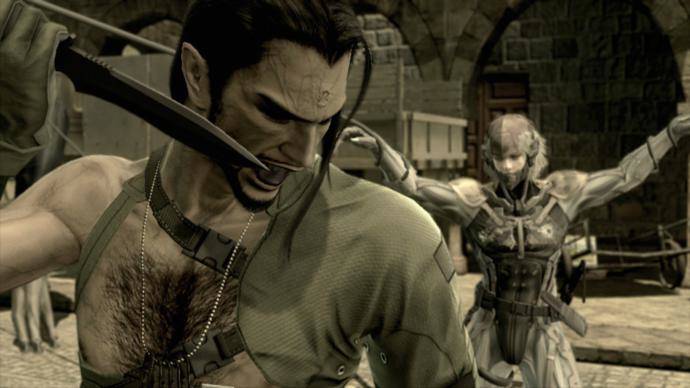 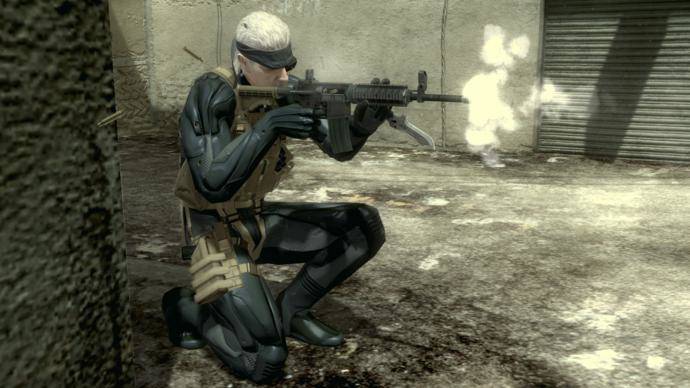 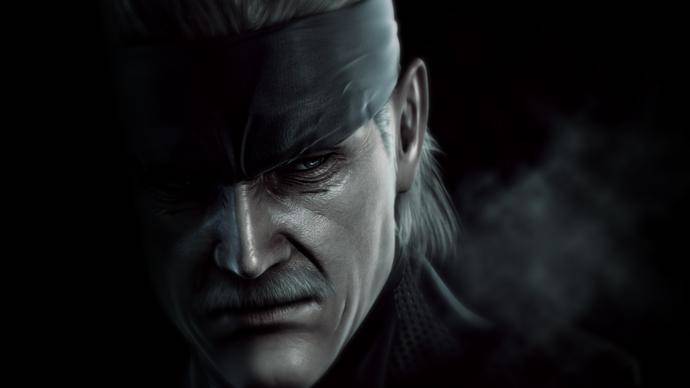 But things get complicated. Old faces return and Snake too isn’t invunerable to Liquid’s nanomachine tests. Snake will need to go around the world to finally get chance to fight his brother one on one, on an even battlefield.

Metal Gear Solid 4 is a completely new sort of Metal Gear game in many respects. Built for the PS3, the top down view that had been a series staple until Metal Gear Solid 3: Subsistence is gone, replaced with a camera that allows for more knowledge of your surroundings. This makes it easier that the base Metal Gear Solid 3 package, but fairer as well. It also allows for more complicated areas, although those that play on the lower difficulty settings probably won’t really get to see that.

The biggest change is the octo-camo, a device that allows you to blend into any surface. It’s impressive, not only from a gameplay perspective but from a technical one as well. This new sort of stealth is fun to use and not as much of a free-pass to do whatever you’d like as it sounds. You still need to move carefully, you still need to make use of cardboard boxes (or drums), there’s just another element to be aware of.

The combat is more fun this time around and is far slicker than in previous games. Those that enjoy running around, shooting rather than sneaking, will have dozens of weapons with which to exact your sadistic, Volgin-like nature. Snake’s movement has never been more fluid, and no matter how you play, you’ll find that things are improved. Whether you want to put people to sleep with the tranquillizer or if you want to really challenge yourself and run through without any additional help, Metal Gear Solid 4 offers new ways of doing both.

While the gameplay has massively improved, the way the story is delivered is either the best thing ever or the most annoying. There are cutscenes that will technically last up to an hour and a half.(although that time is actually spread across two or three pausable, skippable videos, at least one that has some level of interaction). The story is enjoyable and well directed, so it’s worth watching at least once. The pay off is more than worth it.

Each location, five in total, has a focus on a different form of stealth, and not each level manages to be its best. One, which has you tailing a resistance member in Eastern Europe, seems like a really fantastic idea until you’ve played it more than once, at which point you wish you could hit a fast forward button. This is a game that was designed to be at its best the first time through, with no spoilers or prior knowledge. This far after release, that seems unlikely, but it’s still worth checking out.

A patch last year finally did the unthinkable: added trophies to Metal Gear Solid 4. If you’ve been looking for an excuse to return, look no longer. The trophies will have you doing absolutely everything the game has to offer, and believe me, you’ll need to work for your platinum. You can get the bulk of your digital rewards in only two or three playthroughs, but to get the platinum you’ll need to do at least one very good playthrough and at least one very bad. This will take upwards of 80 hours, and if you plan to get the platinum I suggest you start out with a trophy guide to minimize effort.

The patch also meant you can install each level from the start screen, as opposed to at the start of each chapter. This is great for people that play regularly, but be sure to double check your HDD before hand – it’ll take up a lot of space.

I was amazed to find that Metal Gear Solid 4 still stands up, graphically, today. It was a must-play thanks to its flawless visuals six years ago and it absolutely remains that way now. There have been better looking games in the time since (and even at the time, if you have a top-of-the-range gaming PC), but MGS4 still manages to impress, especially in terms of the character models.

I can’t knock the sound design either. The music is perfect throughout, with the iPod offering a nice range of music from throughout the series (in case whatever is playing isn’t to your tastes). The voice acting, as always, is top notch and will bring every corner of the story to life. There isn’t a weak line in the whole thing.

Perhaps Metal Gear Solid 4’s biggest weakness is that it changed too much. Gone are the majority of the hilarious CODEC messages from your support staff (although there are still some you’ll love), the camera angle has changed, the way you fight has changed – even the protagonist has changed. It’s still definitely a Metal Gear game though, and perfectly sits as a book end to Snake’s story. Revengeance was fantastic, but it just served to show that life went on after the conclusion of this game. The real ending is here.

And it’s absolutely as good of an ending as a long-time fan could have hoped for.