It was, and remains, an example of what PlayStation 2 was capable of, and that Final Fantasy X/X-2 HD Remaster is one of the nicest looking titles on the PS3 says a lot about what Square Enix’s design team managed over a decade ago.

That’s not to say that the visuals are perfect. Some of the animations are off – too expressive to make up for a lack of subtlety – but I defy you to find an individual screenshot that looks bad. The colour, the history and atmosphere that makes up Final Fantasy X’s world of Spira is unparalleled. It’s a real world, albeit with locations connected by long straight paths.

Another thing setting it apart is the battle system. Final Fantasy X’s battle system is gorgeously strategic. Even the way you improve and level your characters is entirely up to you, after a point. Smaller enemies, or Fiends, can pose a threat if you face them incorrectly, or will be wiped out in a single turn if you think about what you’re going to do. Like all older JRPGs, you can expect constant random battles, although they never felt old. People who dislike this particular Marmite-staple of the genre will likely still not be converted. 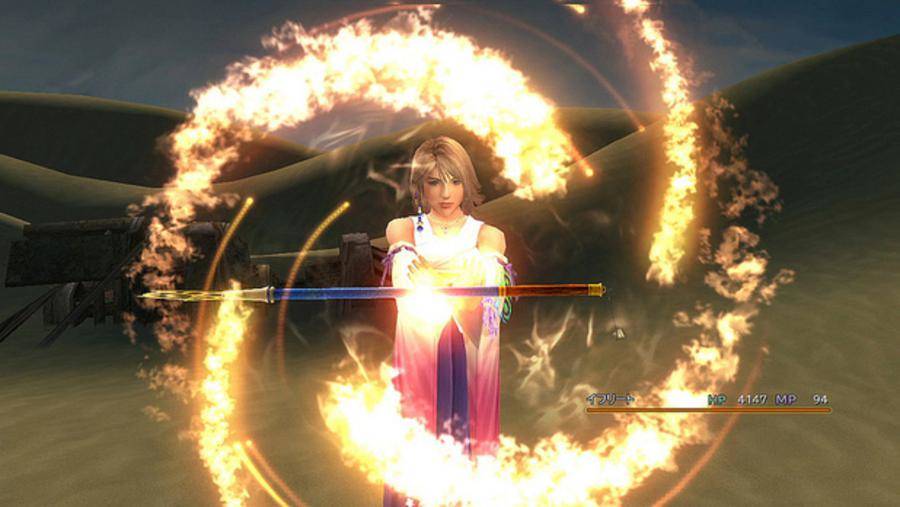 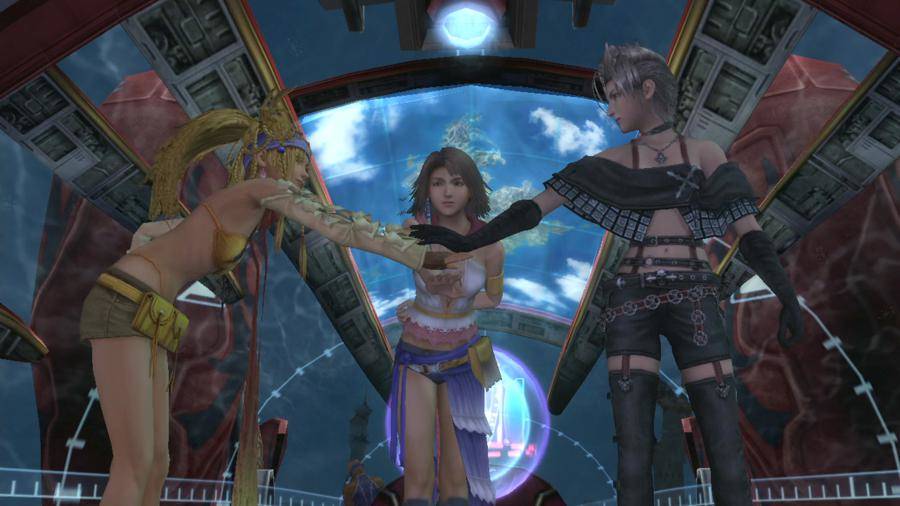 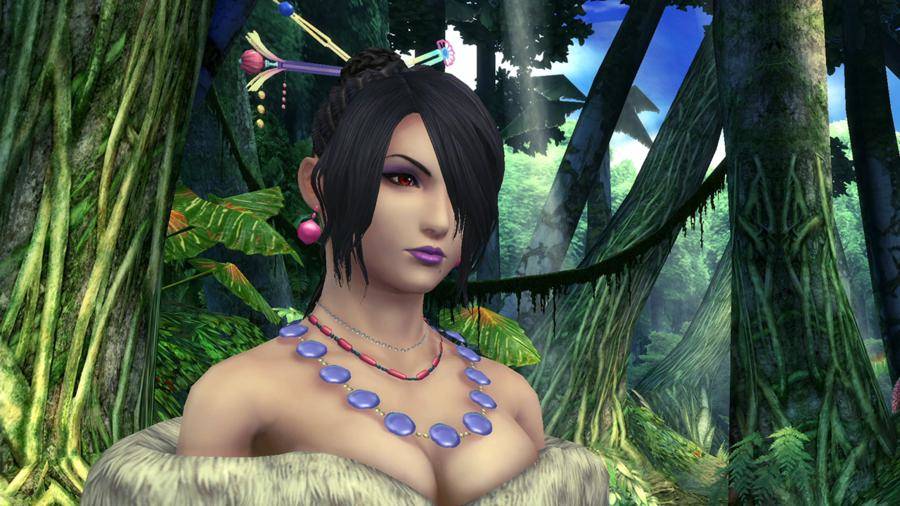 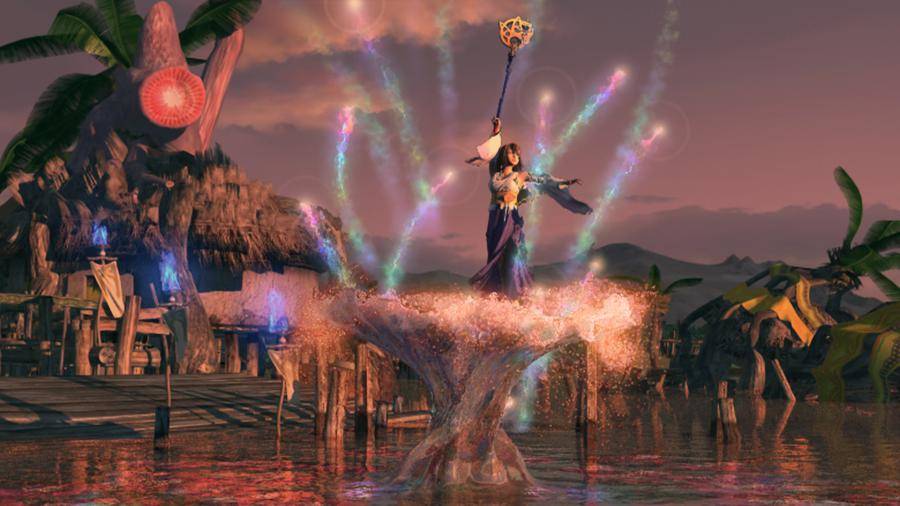 Adding to the strategy is the ability to change characters and weapons on the fly. This makes Final Fantasy X really stand out. Three people take part in a battle, but you can switch so long as the character you’re trying to swap out is alive without a time penalty. Need a white mage? Bring out Yuna. Need to cast some Thunder magic? You’ve got access to Lulu. It offers a whole new, less constrained way of facing opponents, and makes for interesting play.

All of this. plus the fact that Spira boasts living, breathing cities and villages, makes the limited world design of Final Fantasy X less spiky than in Final Fantasy XIII. Sure, you’ll walk forward a lot, but there’s enough to distract you that you probably won’t mind. The characters are more instantly likeable as well, and the story stronger.

This is all tied into the way the world is delivered. The plot begins with a number of small mysteries: Tidus is transported from his life as a major sports star in a futuristic city and finds himself in a land where they actively avoid technology, and where religion rules. Tidus finds himself joining a pilgrimage to defeat a huge monster called Sin. Tidus is as lost in this new world as you are, and it aids the learning experience, help involve you.

Characters are introduced well, and are built to be stronger throughout the title. That should be something of a given in a game with such a focus on story, but that’s not always the case.

X-2 isn't as good as Final Fantasy X, but it has its plus sides and will finally be able to find its place in the community

The remastering process has done this game well. Final Fantasy X always looked great, but it’s just to HD has been supported by a long but loving development team. Everything is as you remember it, only better. Text is cleaner, locations look brighter and more detailed and music has a new depth. 95% of your adventure will be benefited in some way by playing this collection.

It’s not quite perfect though. There was definitely a pecking order when it came to fixing up characters, for instance. Important people in the world of Spira, and especially playable characters, have been much improved over their PS2 counterparts. Tidus and Yuna wouldn’t look amiss in Lightning Returns. Their characters models are sharp, colourful and don’t at all suffer from being a decade old.

Then there are named characters that you’ll bump into occasionally. These look better than they used to, but obviously weren’t important enough to warrant too much time. They don’t look out of place against the main characters, but you’ll suspect something is different. And there’s everybody else. Nameless faces you’ll bump into on your adventure. These have expressions out of Perfect Dark or Goldeneye, stretched across a character model with little or no care. They look sharper, but not necessarily better than they used to.

The goofy moments are still as silly as ever, and maybe more so. Animation really is exaggerated, and being in HD, with nicer models, just shows off how much worse this sort of thing used to be. Metal Gear Solid 2 HD suffered from a similar problem, although both of these problems are easy to ignore when you take into account the wealth of improvements on offer.

And that’s before mentioning the hundreds of hours of side missions, collectables and grinding you have the option of partaking in, towards that platinum trophy. There’s a lot to see in Spira, so bring along a strategy guide.

Final Fantasy X is one of the best JRPGs ever released, perhaps even one of the best games period. Its sequel is less classic, but might find new life as part of this collection.

What Spira Needs: A Girl Band

I have to admit, I was one of those that found the idea of Final Fantasy X-2 heinous back ‘in the day.’ The story of Final Fantasy X had been concluded, the world didn’t need to be continued, and then they’d brought it back, only as if it was a Charlie’s Angels spin-off. There were some that called it girly, although the all-female lead cast is actually a bonus, not a fault. No, the problem was elsewhere.

Everything is as you remember it, only better. 95% of your adventure will be benefited in some way by playing this collection

Final Fantasy X-2 has a good place in this collection. It’s not as good as Final Fantasy X, but it has its plus sides and, a decade after it was originally released, it’ll finally be able to find its place in the community. Those that never played it then, because they didn’t want to see Yuna, Rikku and newcomer Paine dance around now have no excuse, as it’s on the disk anyway.

Yes, it’s true that the story is more goofy than anything X could have come up with, and there’s nothing really as memorable. But the battle system is fantastic, and revisiting your favourite locations is a must. It’s not so abhorrent that it deserves to be completely ignored, never touched again, and this collection proves that. It’s an above-average title vastly overshadowed by its predecessor – no more, no less.

And Everything Else Besides

On top of the two games, the Final Fantasy X/X-2 HD Collection contains a few other rarities and interesting extras for fans. There are a few extra videos and audio plays to listen to that fills in the gap between games, and adds on a little after X-2.

There are also two platinum trophies, giving you plenty of reason to finally face up against those dark aeons.

This is how you do a HD collection. Square Enix have gone above and beyond so that Final Fantasy X is preserved for future generations, at its absolute best. If you still own a PS3 or have invested in a Vita, why not take another trip down memory lane? It might just be the best value vacation on the market.