Ride to Hell: Retribution is a gritty tale of revenge, set in a world where every woman will have sex with you if you beat up their partner (unless they’re prostitutes); where police officers and miners carry vast amounts of drugs on their person; where cowboy hats protect your brain from bullets and in which walls, floors and doors are mere suggestions.

That the credits contained almost ten minutes of names is perhaps the biggest surprise to be found in Ride to Hell: Retribution. The only other that even approaches it might be that it’s actually possible to fight your way through all the glitches to see the credits in the first place.

There’s an awful lot wrong with Ride to Hell: Retribution. In fact, you could list all the features of the worst games ever and a lot of those features, if not all of them, would make an appearance here. From the get go, from that first glimpse at an oversized, deformed hand, from the first time you shoot a gun, you know that you’re in for a bumpy ride. 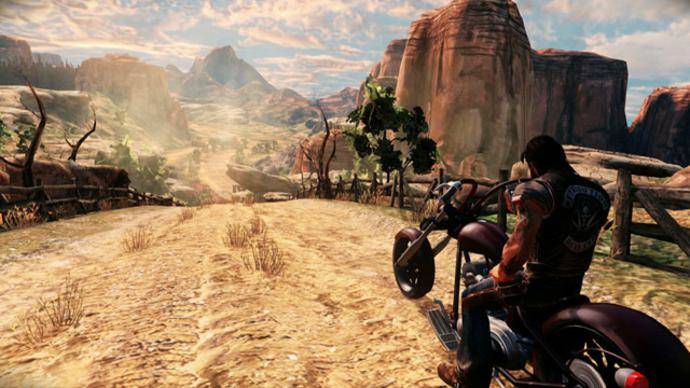 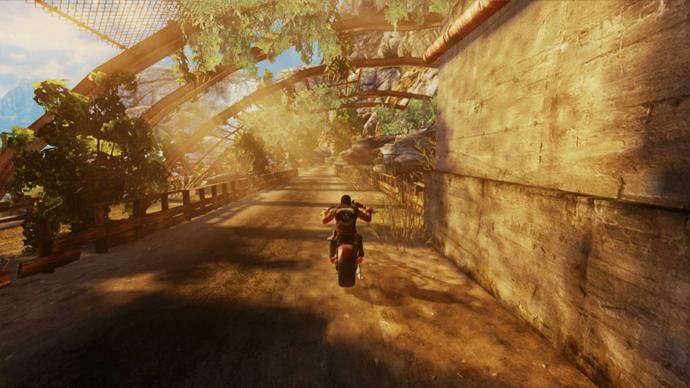 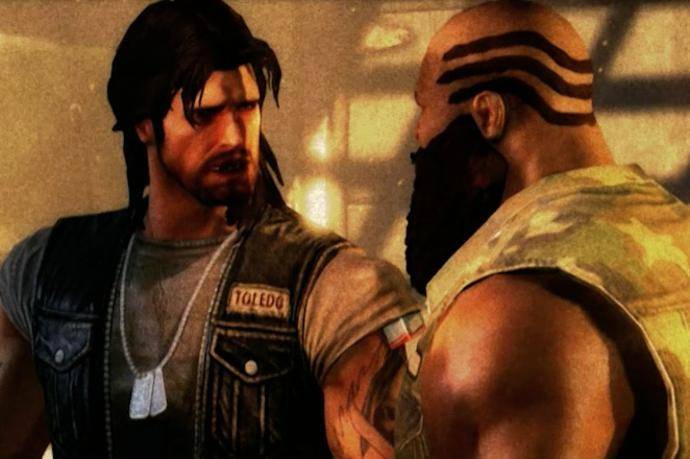 But by comparison, Ride to Hell is a title that starts out well. Before long you’ll discover that, bubbling below the surface, is a volcano of glitches just waiting to erupt. Doors won’t open, enemies will punch you and bullets will come out of their hands, you’ll suddenly die for no reason.

Ride to Hell: Retribution follows the story of Jake. He’s just gotten back from Vietnam and he’s suffering from post-traumatic stress. Don’t worry though, it’s not ever mentioned again. On a night out with his brother, a gang attacks them and his brother is killed. A mission for revenge begins…

With a bit of patching, Ride to Hell: Retribution could merely be a very bad game, as opposed to one that's almost entirely unplayable.

Along the way you’ll fight a variety of strangely-named adversaries (King Dick is my personal favourite) who will try to chop you up, blow you up and shoot you in the face before apologising and saying they didn’t actually mean it. Then you’ll kill them.

Variety is the Spice of Life

It’s not that easy though. To get to each of the bosses you’ll need to ride, shoot and have sex across a variety of locations. The bike riding segments have you moving constantly forward, trying to beat a clock, keep up with a target or avoid gunfire. If you slow down or crash (or sometimes if you’re just moving forward), the whole thing will fade to black and you’ll be forced back a few feet.

You’ll be attacked by other bikers as you drive along and you’ll need to hammer a button until a bar fills up and you can successfully knock them off their bike. This doesn’t work, often on any level, and is incredibly frustrating.

Not only will you knock them off, but you’ll be able to shoot at them as well! The game takes over and slows down the world, allowing you to shoot at enemies in front of you. This is less buggy than the QTE, but it makes for an incredibly boring mechanic 95% of the time.

When you reach your destination, you’ll be treated to a high quality cutscene (of course), and then you’ll probably need to blast your way through a maze of buildings, machines or rooms.

Moving around actually made me feel seasick. If you ever played Kane and Lynch 2, this is worse, but accidentally. When you move quickly, Ride to Hell starts to struggle under its own weight and Jake will start jumping around the place, almost as though the frame rate has dropped (although it doesn’t). Combine this with the run, which shakes the camera around, and you end up with something that should probably come with a health warning.

Jake has just gotten back from Vietnam and he's suffering from post-traumatic stress. Don't worry though, it's not ever mentioned again.

Your only time spent exploring will probably be after you’ve killed everything and are struggling to find the exit (because every entrance and exit is painted on in the same way and there’s no indication as to which is “real”) or because one of the enemies has gotten stuck or just hasn’t appeared, and so you’re unable to move on.

That latter option happened far too often. Enemies getting stuck is annoying, but they’ll tend to shoot at you if you’re in range and from there it’s only a matter of retracing your steps. Them not appearing though is another matter entirely. You’ll need to basically walk around until Ride to Hell decides to make them appear. Either that or reload the checkpoint and hope things work as they should.

Actually fighting enemies is as frustrating. It comes in two flavours: guns and melee. The gun mechanics actually aren’t too bad. Generic, yes, but bad?

Enemies will hide behind low walls and you can usually head shot them without any trouble. This is made easier because, a lot of the time, these enemies won’t even notice you, sometimes standing, staring at a wall. Killing them will net you some cash and some drugs. Everybody – police officers, rival bikers, random people – in this game is carrying drugs. You’ll get to sell them later on.

It’s certainly not fun, especially when dealing with rocket launchers or enemies who take more than one blast of a shotgun because they’re wearing a helmet or cowboy hat, but it’s the most slick area of the game. That’s not a good thing.

Melee, on the other hand, is painful. You can unlock new combos further down the line, but the basis of each close quarters encounter is “Hit, kick to stop them from blocking, triangle to block yourself.” This would be merely underdeveloped if it actually worked, but it doesn’t. Hitting will often result in your first going right through an enemy, kicking will often bounce off a block and blocking doesn’t work either.

It’s like playing a game of rock, paper, scissors with somebody with no hands. You’ll win, but you won’t feel good about it.

There’s only a small handful of women in the game that you don’t have sex with. I’m no feminist, but the developers at Eutechnyx have created a game that would make even the most hardened chauvinist cringe.

Every female character that you encounter – except for a handful of prostitutes and a rather plain girl who ends up being a love interest anyway – will quite happily end up in the sack with you, just because. You beat up possible rapists. SEX. You did them a favour and beat up their deadbeat husband. SEX.

I tried it after playing. This doesn’t work in real life.

Still, it’s worth watching the sex scenes for a laugh anyway. Watching a mechanic (“I don’t think I’ve ever seen a woman fixing a truck.” SEX.) in full one-piece grinding up and down as the camera pans around the room – as if she wasn’t wearing full work clothes – has to be one of my favourite moments of this generation. It’s so surreal, like something that a young child with a vague approximation of sex might presume it’s like. Someone at Eutechnyx needs to have “the talk” with their staff.

Where Did That Wall Come From?

It’s not only the story, the characters, the gameplay, the good taste and the general design that makes Ride to Hell the special game that it is, but the graphics are dreadful as well. The characters are warped beyond belief. Arms are out of proportion with tiny heads and there’s not a single woman in the game who will get to 30 without needing major back surgery. Enemies only come in three or four varieties, although sometimes the developer’s changed their hair colour.

The fight system is like playing a game of rock, paper, scissors with somebody with no hands. You'll win, but you won't feel good about it.

It’s not just that though, the levels themselves are poor as well. A mishmash of copy and paste buildings that act as a maze for you to explore.

As if all of this wasn’t bad enough, there are other visual problems that only serve to highlight just how terrible Ride to Hell is. Constant frame rate problems show just how underdeveloped it is, and texture pop-in happens so often that it should probably be described as a feature on the back of the box.

Add in the fact that things will randomly appear and disappear, sometimes right in front of you, and you have something that might not be one to go for when you choose to show off the power of your console.

The voice acting is pretty terrible as well, although this mostly serves as a positive. Think Deadly Premonition, without the charm.

Thankfully it’s not all bad news. The music is pretty awesome and you’ll find yourself tapping your feet more than once. Is it enough to make up for the previous 1300 words of negativity? Only if you really like classic rock-esque music. As in, a mechanic-in-a-full-body-suit degree of like.

With a bit of patching, Ride to Hell: Retribution could merely be a very bad game, as opposed to one that’s almost entirely unplayable. I’ve had to play levels again, I’ve had to turn off my PS3 entirely and I’ve been frustrated to the point of swearing, but it is actually possible to finish it. This is one to give a miss, although trophy hunters will no doubt enjoy the 30 or so really easy trophies that come with playing.

The biggest questions about this game don’t come from the game itself, instead you’ll ask how it ever saw the light of day. It does absolutely nothing for Eutechnyx and, after a decent run of releases and some incredible THQ acquisitions, it’ll do nothing for Deep Silver either.