Any fantasy-RPG fan knows that if you’re looking for a broad, open-world experience with unprecedented attention to detail and more lore than you can shake an enchanted mace at, then you should look no further than the Elder Scrolls series. The fantasy realm of Tamriel is home to multiple races, factions, guilds, ghosts, and monsters. In The Elder Scrolls: Skyrim, players are brought to the titular province to explore the northern wilds, mountains, caves, catacombs, and ruins of Skyrim, the land of the Nords. Bethesda’s latest entry into their long-running series stays true to its mantra of true player freedom and a seemingly endless quest bank, all while continuing to evolve gameplay and polish the player experience.

When it comes to gameplay in Skyrim, it is not a question of what you can do, but what you want to do. Let’s start with the skills and abilities your character can learn and master. The leveling system in Skyrim is similar to those found in Morrowind and Oblivion in that specific skills increase as they are used. What sets Skyrim apart from its predecessors, however, is that you are not forced to choose a specific set of major and minor skills to focus on throughout your play-through. Earning a new skill-rank in any ability will put your character one step closer to gaining a level-up, giving you the choice of increasing either your health, magic, or stamina. This is an excellent system for both newcomers and veterans of the Elder Scrolls series. It allows for the same depth of character creation that experienced players are comfortable with while making the game more accessible to those who may have been a bit overwhelmed by the complexity of earlier titles.

A level up will also grant one skill point to be placed onto one of the 18 skill trees, giving you a special ability within that skill. For example, a point placed in the “One-Handed” skill tree may be used to increase all damage for one-handed weapons or to grant the character a special power attack. As your proficiency a skill increases, you gain access to more branches of that skill tree, giving you more options as to where to put your points. Even though this may be a bit confusing when taken in all at once, the game does a great job of explaining everything and the learning curve is not nearly as steep as one might expect. 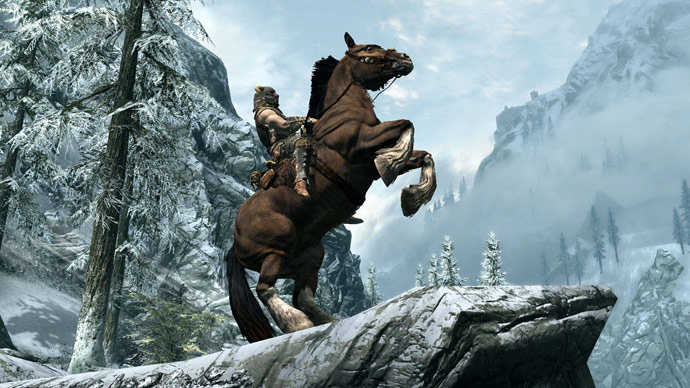 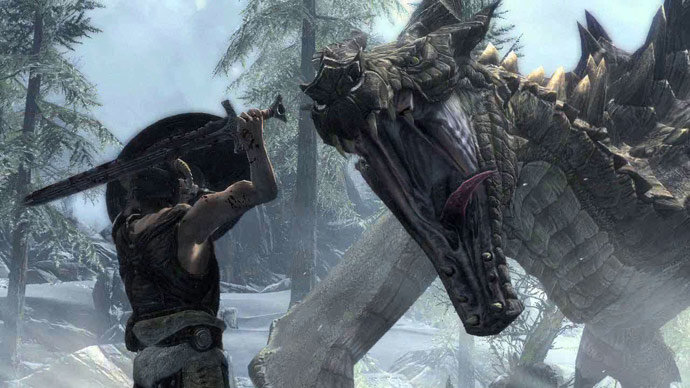 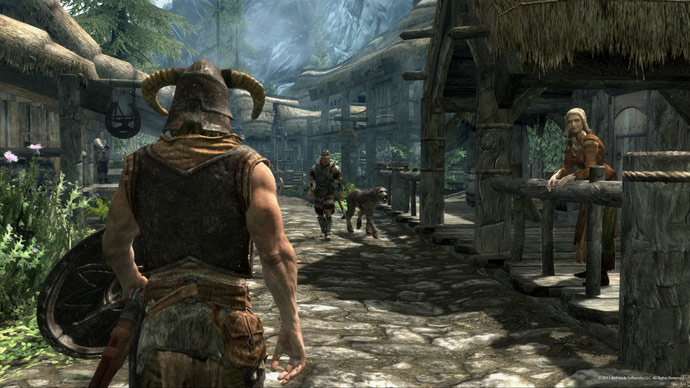 The gameplay freedom that comes with this system is staggering. Feel like wielding a two-handed sword, axe, or mace to bring down your foes in one crushing blow? You can do that, or you could use lighter one-handed weapons and shields for faster, weaker hits with a chance to block. Or you could be sneaky, using daggers and bows to silently dispatch enemies either up-close or from a distance. Magic is another option which allows you to hurl destructive spells, conjure spectral helpers, or perform healing miracles. Using these skills in combat works well enough, but is not great. The movement and aiming is clearly built on the same framework as other Bethesda games; which is to say that it is so-so. The crosshairs feel very floaty and imprecise, which will make and Fallout 3 or New Vegas players really miss the V.A.T.S. system.

If you don’t feel like fighting you can become a blacksmith, alchemist, enchanter, master haggler, pickpocket, or even a chef. The best part about these skills is that you they are not exclusive from one another. You can mix and match however you want to perfectly suit your gameplay style.

As impressive as the in-depth character customization can be, the true breadth of Skyrim is in the game’s world and all the side quests that you can embark on. Without even getting into the main story, you can easily sink dozens of hours into Skyrim. There are multiple factions and guilds to join such as the fighting Companions, the Mage’s Guild, the Thieves Guild, and the Dark Brotherhood. Each of these has its own quest line that will take you from being an entry-level member to the leader of the guild. Aside from these quest lines, there are countless miscellaneous tasks that NPC’s will ask you to complete. Some of these will be very simple and quick, while others will take you on long and complex journeys for money, spells, or rare loot.

While the number of side quests is impressive, not all of them are of the same high-caliber. For the most part the missions are fun and varied, but after a while some of them begin to feel more like fetch-quests and chores. Fortunately, if you don’t feel like running errands for random NPC’s, then simply exploring the world can be an adventure in its own right. The forests of are full of life and hidden treasures, while the atmosphere of the countless mines, caves, and ruins will make you want to venture further and deeper into the world of Skyrim. The only parts that can be a pain to explore are the mountains. If you can’t seem to spot the specific path that the game wants you to take, scaling a mountain can be very frustrating, as the places that you can easily run up can be indiscernible from spots that are too steep to climb.

On the Playstation 3, Skyrim’s graphics are stunning. Bethesda has really upped the ante since Oblivion, bringing better textures, models, and effects to the table. In Oblivion, many players had complaints about the character models; specifically, the faces. This time around, the character models have been very much improved and the faces look great instead of goofy. Although you will see repetition in NPC faces, the citizens of Skyrim move in a believable way as they go about their day-to-day duties, which really makes the game feel like a living, breathing world. The biggest problem with NPC’s and enemies comes when you kill them. The ragdoll physics that applies to dead bodies makes them move as though they have little or no weight, which can really take a toll on immersion.

Graphically, environments are a mixed bag. Rivers in particular are gorgeous to look at and you will definitely be wowed the first time you see the aurora borealis. The view distance is decent but with some definite pop-in at times. Luckily, you will probably be too focused on the lush plant life or blowing snow that surrounds you to notice most of the time. There are things that are less than impressive. For instance, climbing snow-covered mountains can leave you yearning for colours other than white and grey. And although most caves feature cavernous, plant and fungus-covered, gorgeous rooms, some of the ruins get visually repetitive pretty quickly.

By and large the main issues with Skyrim’s graphics on PS3 are due to the limitations of the system itself. First, the load times can be painfully long, and you will quickly get tired of reading the same tips that are posted on loading screens. What really holds back the PS3 version of the game, however, is the lack of community mods. When compared to graphical patches, tweaks, and overhauls that the PC community has assembled, Skyrim on PS3 looks almost primitive, which is a shame.

If there is one thing that Elder Scrolls is known for, it is for having sprawling open-world adventures. If it is known for two things, it is for having epic stories and volumes upon volumes of rich, detailed lore to pore over. Skyrim is no exception. The story revolves around the return of dragons to Tamriel, and your quest to stop them. As the legendary dragonborn, you are able to speak the language of the dragons and can absorb their souls to unlock your hidden powers. The big issue with the main story is that, despite how compelling it may be, the urge to go off on side-quests is ever present. While the side-stories are also interesting, you may find yourself forgetting just what is going on in the central plot if you stray from it for too long.

The sound design in Skyrim fits the fantasy theme perfectly. The music definitely has a Lord of the Rings feel to it, and the sound effects in the wild really bring the world to life. The voice acting is of very high quality, but much like earlier entries in the series, there are a lot of recycled voices, so be ready to hear the same actors over and over again.

Skyrim is a definite must-play for RPG fans. Although it has some of the weak spots that Bethesda is notorious for, these can easily be forgiven when you take into account the sheer breadth and depth of the game.