Uber-small developer, thatgamecompany previously wowed gamers with Flower. The game was stripped down and simple, but also oddly beautiful. Furthermore, it proved insanely addicting with its “snowball effect on flower petals” mechanic. Flower is a perfect argument for the oft-asked and much- debated question, “Are games art?” And now the studio has upped its game (so to speak) with Journey a compelling and emotional title that is subtly deep and outrageously beautiful…it is a triumph.

Journey doesn’t have a story, per se. That is, it isn’t a narrative driven-game. Players enter the roll of a strange humanoid creature deposited in the middle of a vast desert with little to no instruction. You feel a little overwhelmed, a little hopelessness that just about borders on the depressing. Sparse string music flares in the background and adds to the chilling atmosphere…you are utterly alone, and you don’t know what to do.

Barring a few fleeting tutorial moments, there is no direction given, no map to consult. In the distance, a glowing mountain looms and, seeing as it’s the only visible landmark whatsoever, you are drawn there. As you trek ever onward, a concept slowly unfolds. Crumbling structures begin to dot the landscape, and through a series of hidden panels, we are given an idea of what has happened in this desert. There is no dialogue or discernable script to be found in Journey, which leaves the story mostly open to the interpretation of the player. Each hidden panel provides another piece of the puzzle through an art style similar to ancient cave paintings. We are eventually given the history of the world, though it takes a few plays to fully connect what, exactly, is happening. But trust us, you’ll want to play again.

Traversal is extremely minimal and consists of walking, jumping and, in some super-fun sections, sliding. Your character wears a magic scarf made up of individual squares, each of which allows for jumping and flying. Every time you take to the air, a square of your scarf is consumed until you can no longer jump at all. Your jumping ability can be recharged by various means throughout the game, and searching out what can only be described as floating kanji will lengthen the scarf and add longer jump/flight times. Eventually the scarf will be so long that you’ll be zipping around the air in an intensely satisfying means of exploration. 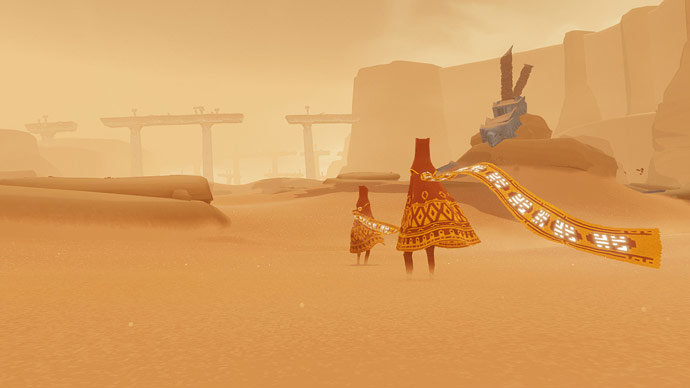 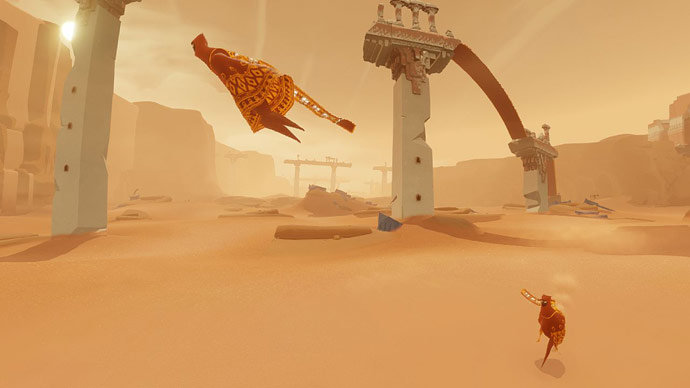 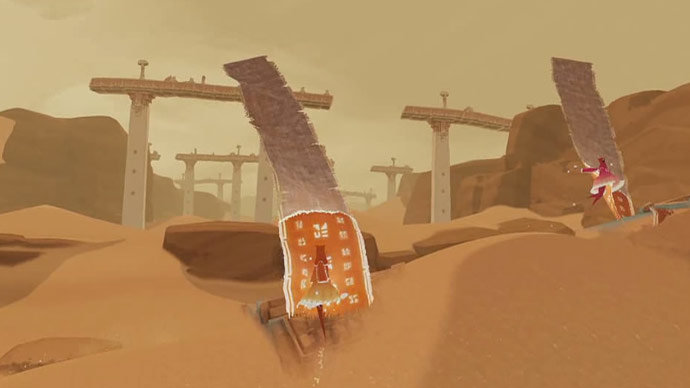 Every now and then, you will encounter a creature exactly like yourself. This makes up the entirety of the game’s multiplayer component; these are other gamers! It becomes clear that Journey’s desert is one gigantic multiplayer map. These encounters can be as brief—usually when the player you meet is too impatient and leaves you to continue his adventure alone— or as long as long as you like. There is no voice chat, no leaderboard, no tutorial here. Traveling closely to your companion will keep your scarf fully charged, and new players would do well to pay attention to what others are trying to show them.

Jounrey is art. And though it may not be the most incredibly detailed game around, it is one of the most beautiful. This is not some sort of graphical benchmark, but the lighting effects on the sand or the individual grains tossed about in the wind can be beautiful. The world is like an absolute dream, and its graphical style fits in perfectly with the message. Think of it this way: does a painting have to be outrageously life-like to be beautiful? Of course not!

Make no mistake—Journey is not for everyone. From the very first moments, there is a lot to take in with very little explanation. It’s strange for a game to pare down everything that makes the medium so popular (story, music, dialogue, etc.), but the execution is masterful, and making it to the end of the game is an emotionally charged experience that will stick with you for days after completion. Those who choose to employ a bit of patience and are willing to explore the dreamy world created by thatgamecompany will be rewarded with one of the most interesting experiences in the history of video games. Download Journey immediately.