Assassins Creed IV Black Flag is Ubisoft’s latest attempt at reinvigorating their flagship franchise. With the disappointment that was Assassins Creed 3, especially considering the massive marketing campaign associated with the title, many questioned whether or not the series can still stay relevant. This new sequel is a direct result of Ubisoft’s awareness with the problems plaguing Assassins Creed 3. AC IV: Black Flag is a stunning and lighthearted action-adventure feast that offers up a gargantuan amount of content.

But for all the improvements AC IV offers, and Ubisoft’s unquestioning desire to provide a more fungible outlook with their series, this fourth major entry often forgets what made the series compelling in the first place. Black Flag is undoubtedly the best pirate game yet on offer, but it is also a rather mediocre and distasteful Assassins Creed experience.

One of the things Ubisoft paid intricate attention to with the new title, is avoiding the often bemoaned and bloated pace of Assassins Creed 3. One of the major complaints that title had was its opening hours, and the lengthy time it took to finally get to the good stuff. Black Flag starts off quick, and makes haste to quickly introduce the most interesting mechanics to the player. While the opening hours still feel like a tutorial of sorts, the ways in which the game introduces them are a lot more engaging than they were in the previous title.

Black Flag is, without fault, brimming with content. There’s a vast world to explore filled with a plethora of islands and cities to discover, ships to plunder, underwater ship wrecks to find, and forts to liberate. There’s even the return of the hunting mechanics introduced in Assassins Creed 3, but this time around it is tethered to upgrading the game’s main character. And just as advertised, Black Flag puts a huge emphasis on ship simulation and ship battles. You quickly gain a vessel of your own, named The Jackdaw, and it becomes an important companion that complements, if not dominates at times, the large cast of characters in Black Flag. The Jackdaw is your only mode of transportation in the game so its importance is blatantly displayed with the amount of time the player will spend with it. The Jackdaw is upgradable in a vast number of ways, and these upgrades are fueled by how many ships you successfully plunder, which all offer different quantities of materials and money that can be gained that are essential for such upgrades. It’s a fascinating and more sophisticated take on ship simulation that easily becomes the highlight of the game.

Another highlight is the way the game treats the player as a proper adult. There’s no handholding as to how and when you want to approach its side quests. You can completely avoid the main story missions if you want to, and focus mainly on finding all the collectables and secrets the game is filled with. And the game does provide enough variety within its side quests that stops the experience from feeling gestating and mundane over a short period of time. It’s a fresh change of pace for a series that lacked a sense of freedom and exploration. It is the proper steps taken to ensure that the series thrives for another few years. But, disappointingly, the significant steps the game takes with its side quests gets forgotten with the main story missions. 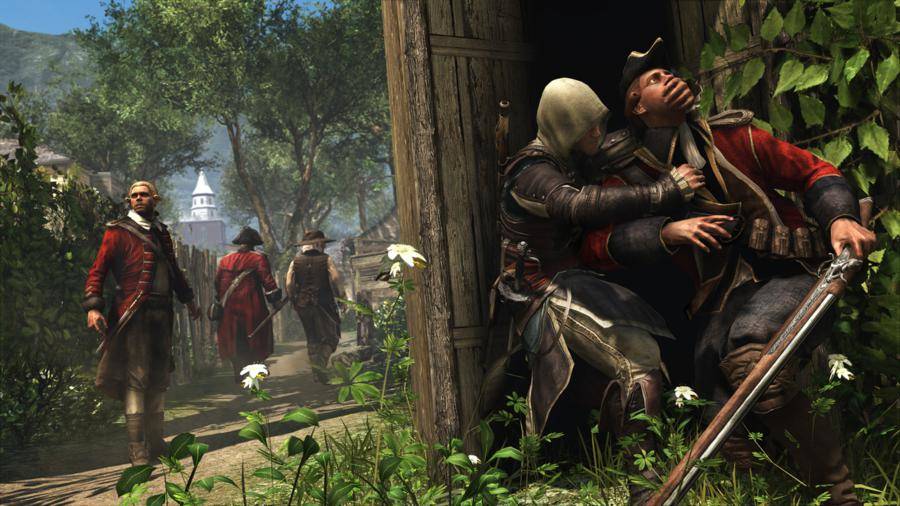 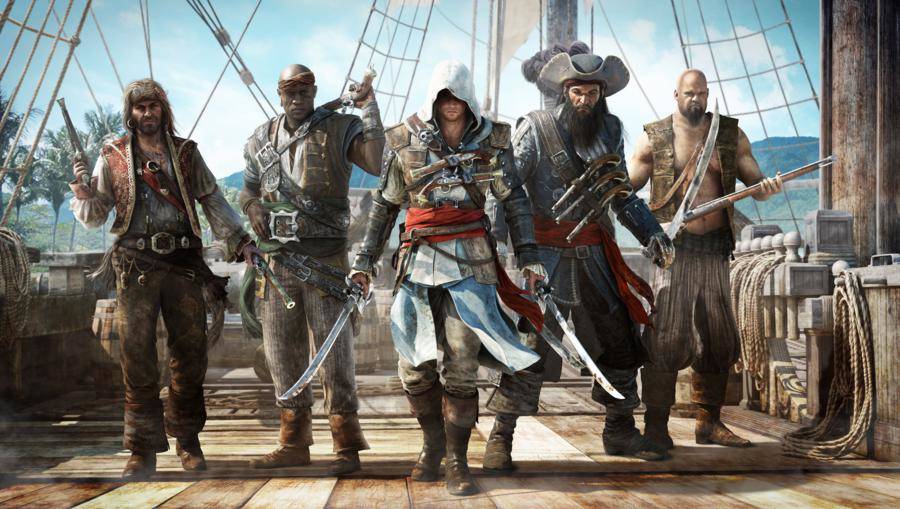 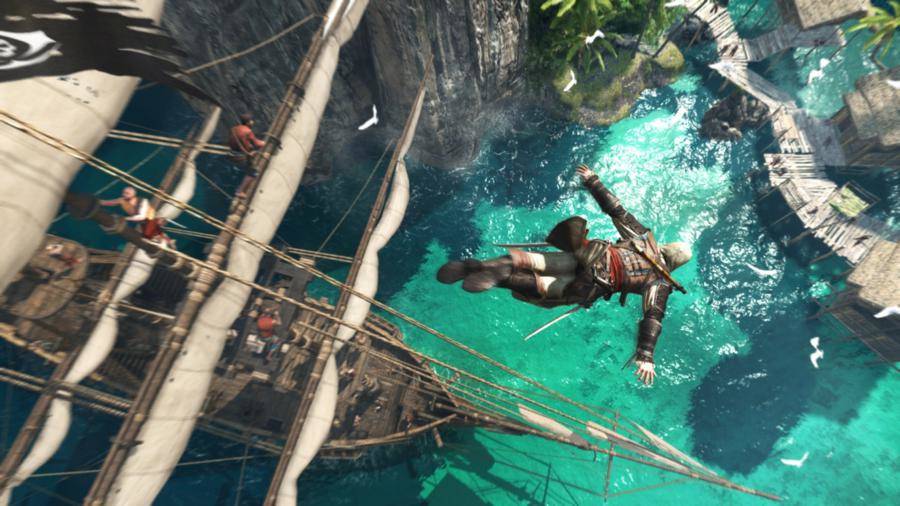 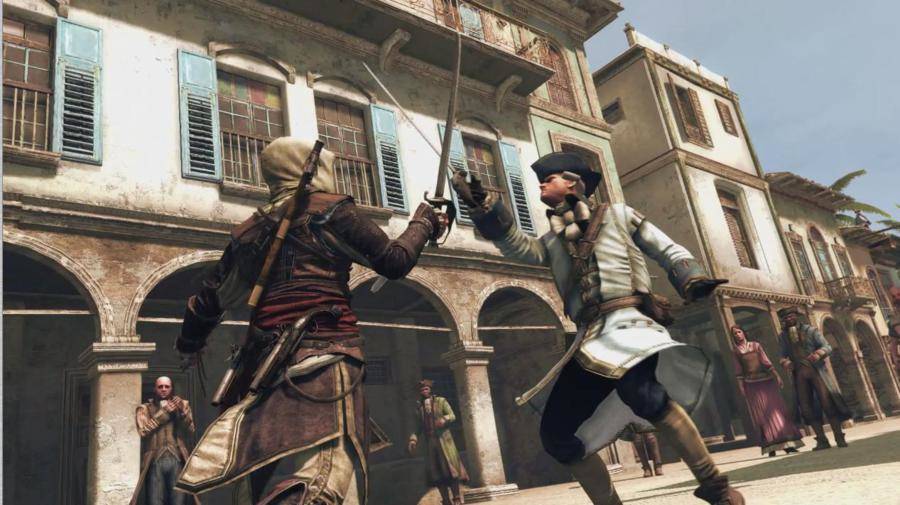 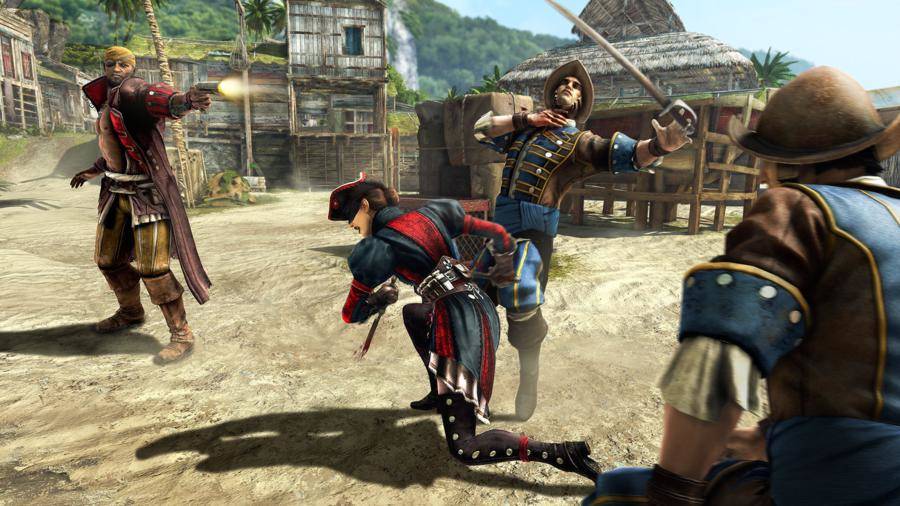 Everything Black Flags deals with when it comes to the core “Assassins Creed” experience is boring, derivative, and frustrating. There’s no sense of option or freedom here, as the game forces you to partake in insensible and contradictory activities. Almost every other story missions deals with you eavesdropping or following specific individuals. And since the stealth mechanics feel extremely outdated, these missions result in anger-inducing outcomes. The close quarter combat also feels ancient and cumbersome, and is need of serious change. What’s more profound is that Assassins Creed 3 contained the very same problems. Ubisoft spent time improving what the game can offer outside of the narrative thread, but they forgot to correct their mistakes where it really counts the most, the main story experience.

Assassins Creed IV: Black Flag introduces a new main protagonist, Edward Kenway. Edward is unlike the previous Assassins in that instead of following a creed and fighting for a purpose, Edward’s main focus is on obtaining as much plunder and coin as possible. Enough to make him and his crew “rich three times over”, as he likes to say. This approach to introducing a character so unlike the previous cast might sound like an interesting idea on paper, but in practice this lack of conflict for Edward makes the narrative unfocused.

While Black Flag does take a more lighthearted approach to its story, and it does focus on the conflicts of pirates, everything surrounding Edward’s story arch falls short mainly because the situations he finds himself in the main narrative all feel mundane. There isn’t a sense of progression, or even excitement here. As mentioned before, the main missions all lack variety and choice which directly correlates with the poor character progression. The rest of the other cast of pirates alongside Edward all end up feeling shallow and pale in comparison to other characters introduced in previous games in the series. It’s a disappointingly weak story that fails to utilize its colorful setting and unique main character to their fullest potential.

The modern day setting this time around, however, induces much life to these particular narrative threads that also subtly pay homage to previous events in the series. Instead of playing as Desmond Miles you resume the role of a regular Abstergo employee. These particular sequences are all played in first-person and focus on hacking other employees’ computers, which then uncover a healthy amount of easter-eggs and secrets closely related with the series’ history. It is obvious that this new approach is still in its adolescent stages, as Ubisoft are clearly testing out if this is the right direction to take in future titles. There’s isn’t much content to experience here, but it is still all fantastic and provides a sound base for something more ambitious later on.

Assassins Creed’s core multiplayer experience makes its return here, but with only a subtle amount of new additions. Despite the lack of change it still becomes a fun and different take on online gaming that adds to the overall package. But unlike the new modern day setting, and the content-induced exploratory approach Black Flag introduces, there doesn’t seem to be an exciting future for multiplayer here.

Assassins Creed IV Black Flag introduces some fantastic new mechanics that make the game a true gem of action-adventure. The amount of extra content here is substantial, and all of it is enjoyable. The focus on ship battles is a highlight as well as the game’s new take on the modern day setting. But everything surrounding the main narrative ultimately falls short, as it doesn’t move the series forward and ends up making Black Flag feel like a filler entry. The game forgets that it is an Assassins Creed title, and in the process feels like two separate experiences mixed in together. Assassins Creed IV: Black Flag is an enjoyable pirate experience, but one that makes assassins feel unwelcomed.