Motorbike games have always been a part of video gaming culture. Go back to the early days of SEGA and Nintendo and you’ll see countless attempts at bringing those two-wheeled speed demons to the digital realm.

This has kind of dropped off in recent years as developers would rather show off pretty cars with high end labels. MotoGP 13 proves that there are still games out there for people that want their motorbike fix, offering high speeds, realistic physics and challenging gameplay that will keep a hardcore fan happy for months.

Choose a rider, choose a track, ride like hell, come in first place. Welcome to MotoGP 13. On the surface it’s very similar to any other racing game – a group of other riders, a countdown, a mind game of ins and outs, of speed and sharp braking.

It’s more than just hitting the right line as you drive around the track, especially as the difficulty goes up, and it’s even harder when driving a motorbike. Too sharp a turn and you’ll be on your face.

You can change how realistic your driving experience is, and with all of the racing assists off you’ll end up with something a little like driving a plate of jelly across a frozen lake. In a good way, though, because if you learn to master that jelly, you’ll look awesome and you’ll win every time.

Through the racing aids and with several modes to choose from, there are some great options for new players and veterans alike, and there’s quite a smooth, user-driven learning curve as well. You play at your own pace, which doesn’t tend to happen in games very often. 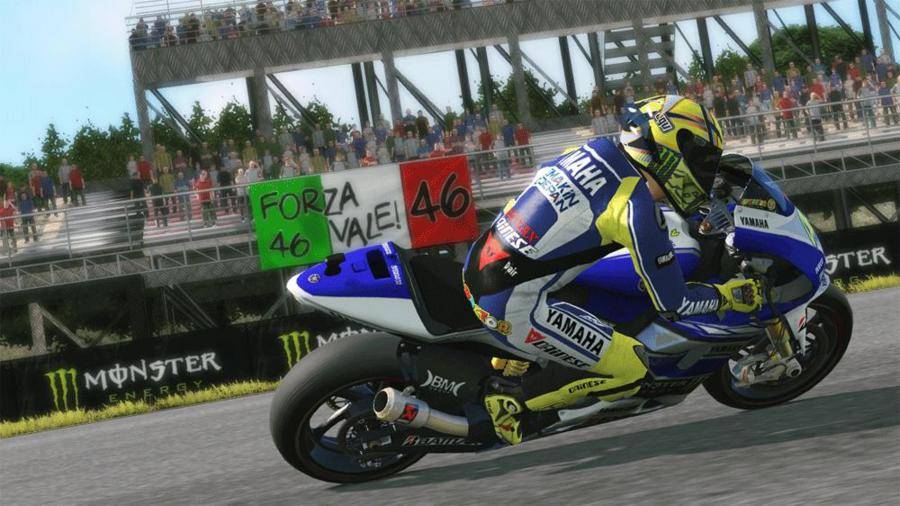 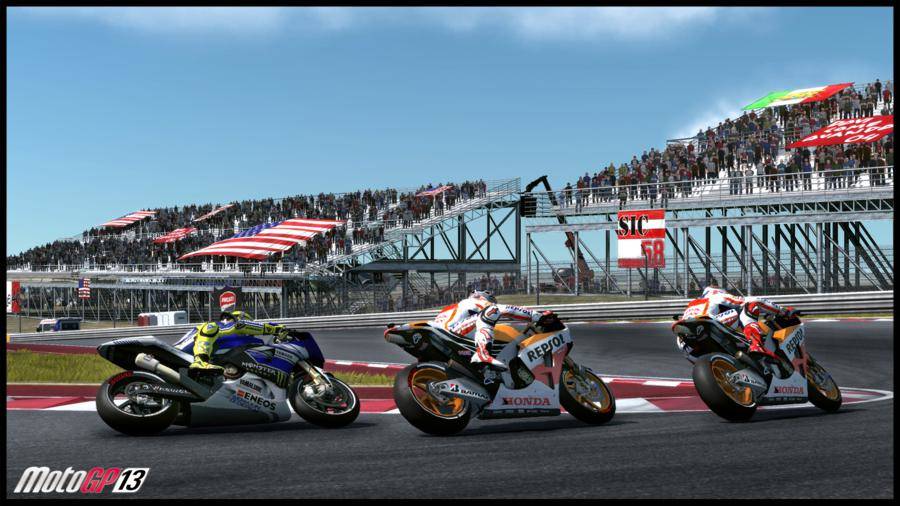 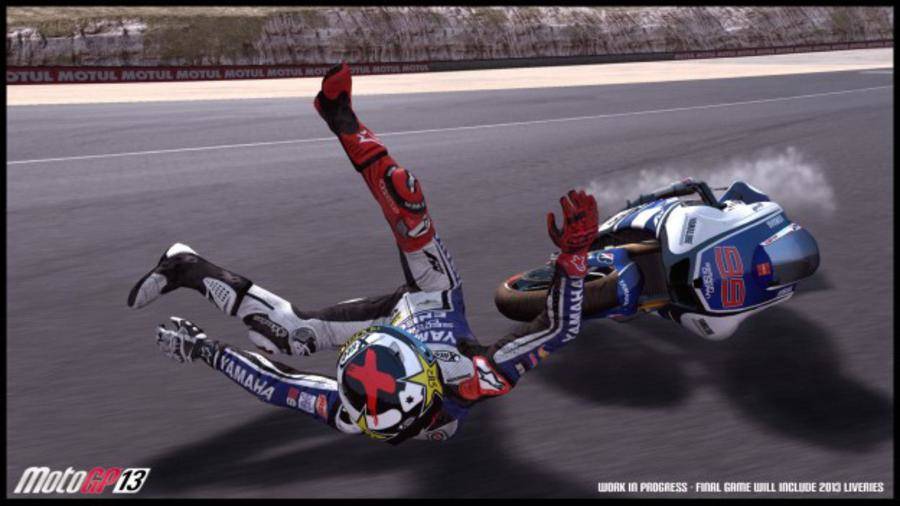 For this reason you’ll find yourself getting pretty good after only a handful of laps, but it’ll take hours, days even, to truly compete against the best of the best online.

While the basics of the game pretty smoothly sail along open roads, it’s in the structure of MotoGP 13 itself that things become a little harder to enjoy.

Let’s pretend for a moment, as if you could, that each of the character models you’ll see outside of races look scarily like sex offenders. I kid not, each of the selectable faces for your personal character look like a member of some odd biker gang for peeping toms, probably making a cameo appearance from Ride to Hell: Retribution.

The graphics don’t get a huge amount better when you jump into races, although there’s a definite reduction in predators.

Shadows are blocky until you drive over them. This is especially a problem on a wet track, and it goes beyond a slight visual glitch. It’s actually pretty distracting. The frame rate has a habit of dropping as well, at odd, unexpected times.

There’s also not a huge amount to do for those that aren’t huge MotoGP fans. It may sound silly, but you race bikes. That’s it. There’s not much in the way of customization (although there’s quite a lot of visual things to unlock), you don’t really manage your career… You race bikes.

That can get tedious, even with a variety of modes on offer. There’s not enough in the way of distraction, no ultimate goal. To those of us without an intense knowledge of bikes, there’s no option to learn any more or get deeper into other aspects of a racers career, as offered by the likes of FIFA and most other racing simulators.

The genre could be done far better, but for now it's definite good fun. Just keep the receipt

And it isn’t that they’ve tried to streamline the racing experience by any means. There’s a lot of screens to click through and videos to watch before and after each race, it just happens to be stuff that you’d rather wasn’t there, or that was presented in a less intrusive manner. You only need to watch a video of the real track you’re about to race on once, and yet it’s presented each and every time.

Some of these menus are helpful, most aren’t. My favourite involves you speaking with your manager about your driving experience. If you complain that the bike doesn’t turn sharply enough or brake hard enough, your bike will be auto-tuned to fix your issues. It’s a nice idea and simplifies the often overly-technical tuning screens of other games. You can still jump in and do it yourself if you choose to.

MotoGP 13 is an enjoyable but occasionally flawed game that won’t likely convert anybody to motorbikes in the long run. As an occasional pick-up-and-play, or for a few days worth of multiplayer entertainment, it can’t be knocked. Only hardcore players will keep with it in the long run, and that’s bound to have an effect on the online mode, which is currently healthy, but not overly so.

Give MotoGP 13 a shot. The genre could be done far better (and it will be, perhaps by these developers), but for now it’s definite good fun. Just keep the receipt.