Have you ever dreamed of piloting an attack helicopter, loaded up with huge machine guns and enough missiles to level a major metropolitan area?

I…have not. And if I had, Thunder Wolves may have turned me off to the whole exercise.

Thunder Wolves is a 90s style arcade helicopter game. If you are looking for some sort of helicopter simulation, you’ll want to look elsewhere. This is a game about easily piloting one of the most complicated vehicles on the planet and turning everything you see into a smoking crater. Sounds great, right?

But there are a number of problems. First, you are unable to invert the right stick. While this may not seem like a huge deal to some, I have played games for the past 15 years or so with the idea in my head that when I press up on a stick, I expect to look downwards. This goes doubly for any game in which I am flying a plane or helicopter, as the whole ‘press-up-to-go-down’ thing is how aircraft work. Undoing all of my training and instincts in order to aim my weapons was a fairly frustrating process.

But it would have been worth it if the game had been exciting. Instead, you get a very standard game that features such original objectives as ‘fly to this point and blow up all the red dots’ and ‘fly to this point and blow up all the red dots while avoiding blowing up the green ones.’ The weapons have no real weight to them, which seems ridiculous when you are piloting one of the most efficient flying weapons on the planet. In a game about shooting at things from a helicopter, you want the shooting of weapons to be exciting. Occasionally you may get caught up in the act of shooting loads of missiles into crowds of enemies but this is the exception rather than the rule, and you’ll often find that you seem to have done comparatively little damage to the enemies on the ground compared to how large your explosions seemed to be. 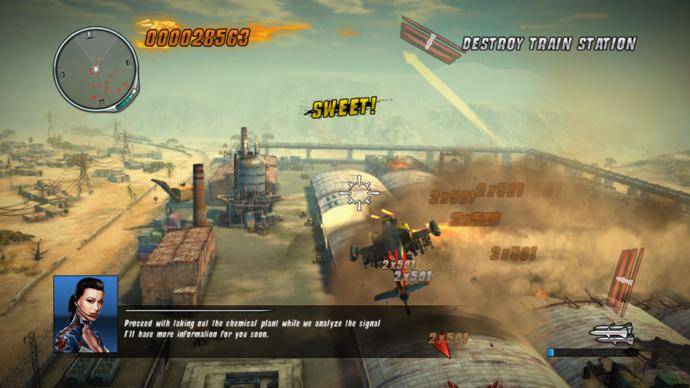 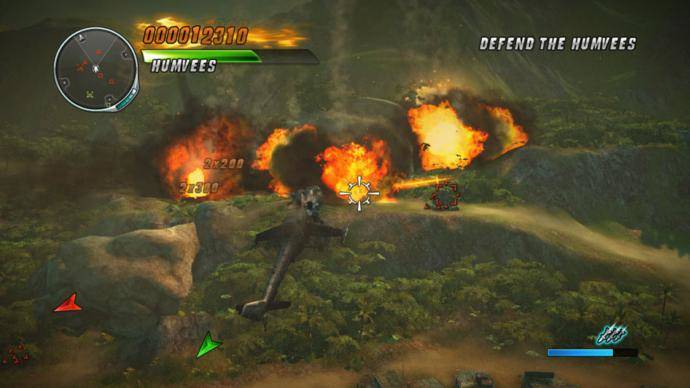 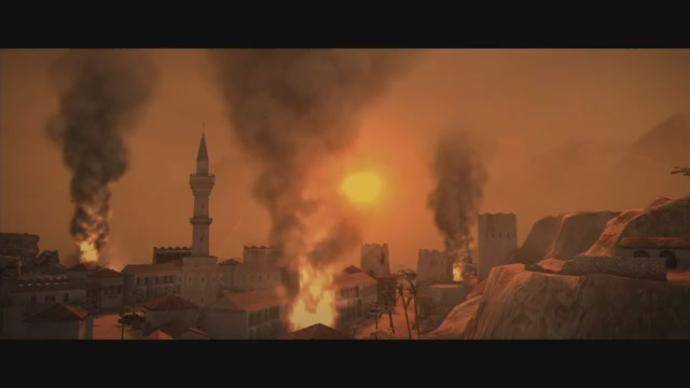 Making matters worse are some of the most annoying talking heads I’ve ever seen in a game. They are clear 90s stereotypes, being completely ‘radical’ while blowing up enemy forces, but they are written and acted in such a way that makes them irritating at best. The entire attitude of the game was just alien to me; at one point I got a good streak going and the words ‘Hells to the Yeah!’ popped up on the screen. Some people may find it completely hilarious, but I couldn’t relate to anything going on with the characters on any level. This game is like Far Cry 3: Blood Dragon without any of the wit, charm, or clever in-jokes.

If you really enjoy arcade style helicopter shoot ’em ups and 90s attitude, you’ll likely find something to love in Thunder Wolves. However, the campaign is quite short, so make sure you don’t mind or are willing to retry some levels for higher scores before you lay down your hard earned cash.

The graphics in Thunder Wolves are fairly typical of an XBLA game. There is nothing fantastic on display, particularly on the ground where the enemies and buildings are located. However, the helicopters are modeled quite well, so the thing you’ll be staring at the most won’t really give you any reason to be annoyed, unless you hate the silly paint jobs that they have.

Machine guns and explosions are 90% of what you’ll be hearing during any given level of Thunder Wolves, so it’s a good thing that they sound just like you’d expect from a helicopter shoot ’em up from any given arcade 10 years ago. The voice acting is a little over the top, but matches the sort of stereotypes that the game was shooting for. Background music is suitably high-octane and will keep your finger glued to the trigger.

There may be an audience for Thunder Wolves, I just don’t fall into the target demographic. As I play the game I don’t see anything that is particularly a mistake, I believe that the developers made the game they wanted to make in order to appeal to a particular group of people. People who have fond memories of blowing the bejeezus out of everything on screen while flying attack helicopters from here to there in the arcades of their youth. If that describes you, Thunder Wolves will be right up your alley. But without those nostalgia glasses, it’s hard to see Thunder Wolves as anything other than a fairly generic shoot ’em up with an attitude that was made to appeal to a group of people I clearly don’t fit into.