State of Decay is the zombie game that is taking the world by storm, after seeming to come almost out of nowhere. With a distinct lack of marketing dollars spent on the game, it’s incredible to see how word of mouth has sold so many people on surviving a zombie apocalypse.

But when you actually play the game, it’s easy to see why the word of mouth is so positive. Despite a few issues, State of Decay is essentially the zombie game that people have been asking about for ages.

State of Decay is a bit like Grand Theft Auto plus zombies.

Well, in a broad strokes kind of way. You’re given an open world to explore, though it is a far more rural place than you’ll often find in the typical GTA experience. The game starts out with you and a friend getting back from a fishing trip to find that the world has gone to hell in a handbasket. A zombie immediately starts to chow down on your friend, and you’re into the combat 2 seconds after the game begins. 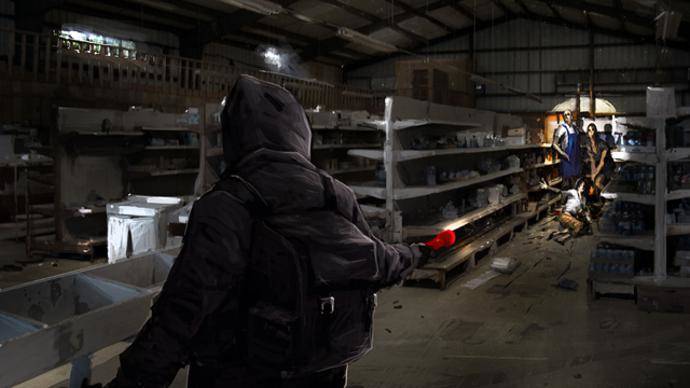 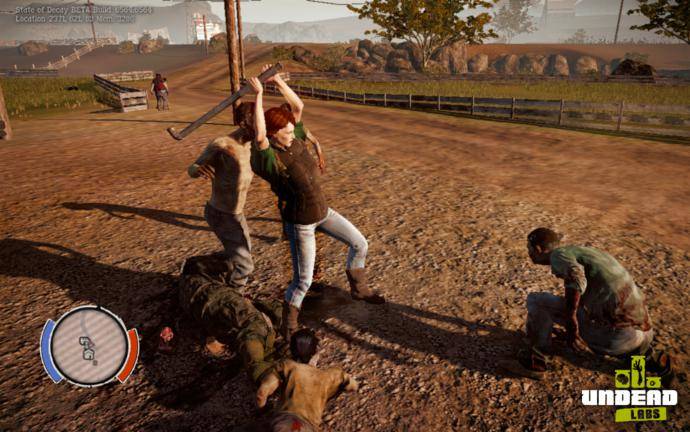 Combat plays a bit like Dead Island, but in third person. The game has loads of melee weapons, and each deteriorates over time. Attacking with any melee weapon depletes a stamina meter, the same meter you will use to run away from overwhelming odds, so combat can become a balance between beating as many zombies as possible and saving enough stamina to get the hell out of dodge. Unlike Dead Island, guns and ammo are more plentiful, and you won’t be modifying any weapons to do electric or poison damage or anything like that. State of Decay tries to be a ‘realistic’ zombie simulator, and it largely succeeds. Combat is important, but you’ll often be best served by crouching and sneaking around and dispatching single enemies with stealth kills, or merely avoiding larger groups.

You’ll take on missions from various survivors and try to curry favor with various people in order to get them to trade you supplies or join your group. But much of your time will be spent scavenging for supplies. You’ll sneak into buildings and camp sites to loot backpacks, dressers, refrigerators, and more to get standard supplies like weapons, distraction items, snacks and medicine. Perhaps more importantly, you’ll be looking for Resources, which come in the form of Food, Ammo, Medicine, Building Materials and Fuel. Resources are important, because your group of survivors will use a certain amount of each type of resource each real world day, and the amount used increases as you add more people to your group. You’ll want to continue to add people to the group, however, because getting survivors to trust you allows you to play as them when your other characters get tired out, needing to rest in order to restore maximum stamina and health. Each character also levels up in different categories, and death is permanent, so you’ll want to spend your time befriending various people and then leveling them up in case one of your top people gets cornered and killed.

When you aren’t scavenging or taking on missions, you’re able to use some of the resources you’ve gathered to build up your base by adding various rooms that have different benefits. Do you want to build a stockpile to hold more total resources, or add more beds so your characters can rest and recuperate more quickly? Each takes a while to build, so combined with the need for your characters to rest, there’s a bit of a time management aspect as well. You’ll need to decide where your priorities lie, and you’ll have to make sure you have enough influence to pay for any rooms you want to build or items you want to take.

What is influence, you ask? Every time you find something while you are out scavenging, you can bring it back home and put it in the shared stockpile. Each item you put in awards you influence, which is the currency used in State of Decay. The catch here is that other survivors will sometimes go out on their own, and the game continues even when you aren’t playing, so anything you put in the stockpile is up for other characters to take. You might come back after not playing the game for a day and find that everything you put in the stockpile has been taken out by other survivors. More often though, you’ll find that the other survivors have found some useful items and put them in there for you to purchase with your available influence points. You’ll have to watch though, as your influence steadily goes away, just because. You may have saved and supplied these people, but what have you done for them lately?

If you want to lead, rescue, save, heal, supply and manage an enclave of people during a zombie apocalypse, then State of Decay is the game you have been waiting for.

The biggest area where State of Decay lags behind is in the graphics department. It’s not that it looks bad necessarily, but textures are not particularly polished and the game has an absurd amount of pop in. As you drive cars around you’ll see trees, bushes, and even the occasional buildings randomly pop in as you near them. It can be a bit distracting at first, but before long you’ll be used to it. The texture pop in is not quite as noticeable most of the time, as you’ll be slowly creeping around from building to building gathering supplies and silently getting around zombies. You’ll definitely have to have some tolerance for strange graphical glitches and unpolished textures, but the gameplay more than makes up for it.

The audio in State of Decay is a bit uneven, at times. The music portion is fine, and largely unobtrusive. Sound effects are satisfying, and I got a bit of a laugh at the ‘PING’ noise made whenever I struck a zombie with a shovel. When creeping around a house, you’ll be terrified to hear the sounds of zombies roaming around outside, particularly the screeches that go up when you alert a traveling horde of your location.

The voice acting in the game is largely hit or miss, and there’s a lot of it. Most of the story is revealed by people who are on missions together having a chat as they take care of business. Many of the main story characters are voiced in a convincing enough manner, but the odd one that doesn’t sound as good will throw you for a loop. In the end, it’s the little ambient sound effects that make the audio experience what it is, and they are very well done. Nobody is going to be saying that the audio in State of Decay ruined the experience.

We’ve been asking for a zombie game where you had to properly scavenge for supplies and look after a group of survivors for years, and State of Decay has finally come along and given us what we asked for. The package is a little rough around the edges, but with the proper mindset and a bit of time to spend each night cleaning up the messes made by other survivors in your absence, State of Decay shines like a diamond amid tons of other games that have zombies in for no other reason than ‘just because.’ This is the game I had hoped The Walking Dead: Survival Instinct would be, and is easily on my short list of best zombie games I’ve played.