Never a franchise known for deep, memorable storytelling, the concept of Gears of War: Judgment seemed a little odd. Were people really that interested in what Baird and Cole were up to when Emergence Day occurred, or right before the final attack on Azura of Gears of War 3?  It turns out the absence of Marcus wouldn’t change things too much: Gears of War: Judgment follows in the veins of its predecessors in both style and personality,  though to slightly lesser returns – and oddly,  with a lot less content.

Judgment provides an opportunity to revisit the war-torn, Locust-infested world of Gears of War and expand on some of its characters and events. Unfortunately, it doesn’t quite manage to do that. It lacks the brutish, twist-heavy personality of its predecessors, offering a narrative arc that’s neither engrossing nor particularly unique. More so, the changes made to the game’s formula play against it, with more drawbacks to level design and story progression than benefits.

Judgment (the first campaign), is told mostly in flashback, with Baird and the rest of Kilo Squad explaining their actions to a military tribunal, each mission detailing a part of their testimony. Introducing two new characters was a great idea – Baird and Cole always paled in comparison to Dom and Marcus, both in personality and complexity – but newcomers Sofia and Garron don’t really add any kind of new dynamic in the group, never really expanding their role much beyond fill-in status.

The biggest gameplay change in Judgment are the ‘Declassified’ modifiers at the beginning of each mission. By walking up to a red COG logo on the wall, players are offered mission-specific challenges that make the levels more difficult and varied. Accepting a declassified challenge changes the circumstances of the upcoming encounter, be it adding a time limit, forcing players to use certain weapons, or providing them with limited ammo to make it through the area.

In concept, this is a fantastic idea: it changes up the style of each mission, and allows players to adjust difficulties along the way, providing an easier path to a three-star rating. But in execution, it’s a mixed bag: some of the modifiers can be entertaining (like adding more difficult enemies), but some of them are more frustrating than they’re worth (particularly the challenges that reduce visibility, which just leads to players running around in fog, getting killed a lot).

The declassified modifiers have a big effect on the level design: Gears of War is already known for tight, linear quarters for players to combat the Locust in, and this closes things even further. The actual combat areas are similar to those in previous games – but to access the declassified conditions between each mission, players are required to go through small, empty rooms. 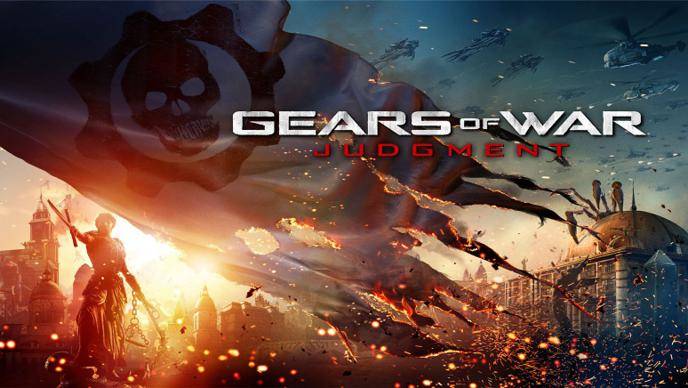 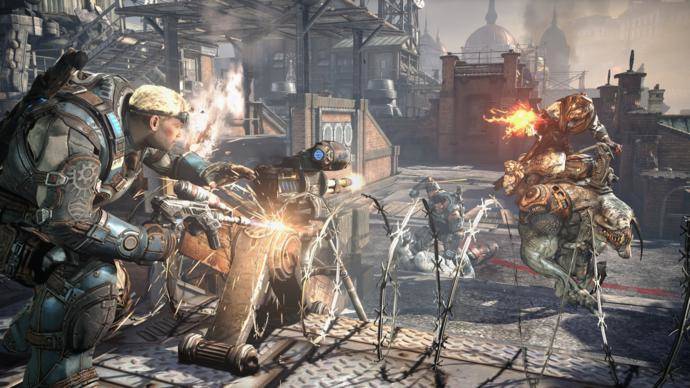 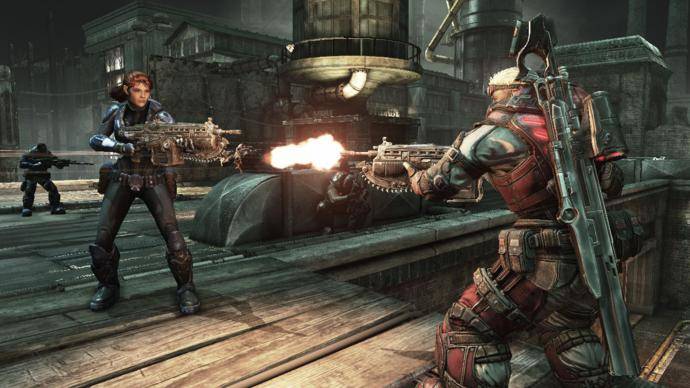 It breaks the entire campaign into choppy stop-and-go sections, eliminating the element of surprise that made Gears such an engaging experience. It is alleviated at times when the areas move away from progressive cover-based action, to tower-defense like, wave-based sections that add turrets and force players to think strategically in enclosed areas. In those moments, the game really feels like an evolution of previous titles; but this philosophy doesn’t extend further than that.

Even odder is the absence of Declassified in the second campaign, which takes place during the events of Gears of War 3. Titled Aftermath, it features Baird and Cole searching for a boat before the final attack on Azura. Again, straightforward storytelling and level design – but without the inclusion of the modifiers that at least made Judgment feel like a slightly unique story. Aftermath is just a slightly-better looking version of Gears of War 3, albeit with a couple new weapons and modified control scheme.

Playing Gears of War: Judgment, I couldn’t shake one feeling: why couldn’t we have these controls years ago? Switching weapons with the d-pad is replaced by a two-weapon system, easily swapped between with a tap of the Y button. There also aren’t restrictions on what weapons can be held in either slot, which allows for combinations like a sawed-off shotgun and new weapons like the Marska (a high-powered assault rifle with a scope). The grenades have also been re-assigned to the left bumper, instead of having to select them in your weapon inventory. Fans loyal to the game’s controls may dismiss it as trying to assimilate itself too much with Call of Duty, but it’s remarkably more effective than the somewhat clunky set-up of previous titles, and gives a new fluidity to combat previous titles lacked at times.

Of course, Gears of War’s multiplayer modes have always been the signature feature of the series – and it’s here that Judgment becomes a real disappointment, a product too focused on DLC and micro-transactions.

The two new multiplayer modes – OverRun and Survival – embrace the tower defense elements found in the Judgment campaign. OverRun pits human COG soldiers against attacking human-controlled Locust players, utilizing a class system to disperse abilities and foster cooperative play. For example, Medics can throw healing grenades, Soliders can share ammo with teammates, and Locust players can spend points earned to spawn as more powerful creations. Survival is the same concept except Locust forces are AI-controlled, a less-entertaining iteration of Horde mode (the absence of which will undoubtedly be a disappointment for GoW vets).

Despite the two new modes, the multiplayer doesn’t have the replay value of previous games – at least not yet. There’s only a few other play modes (Free for All, Team Death Match, and Domination), and there’s only four multiplayer maps to play on. That’s right, four, which basically forces players who want any longevity out of the multiplayer to buy the season pass – which promises more maps, more modes, and of course, gun and player skins, the overwhelming majority of which can’t be earned in-game. DLC is to be expected in 2013 (especially with multiplayer games), but at full retail sticker of $59.99, the lack of content without purchasing a season pass is more than a little off-putting (especially when the Season Pass awards includes things like special matchmaking rooms and more XP).

For a series that’s consistently made multiplayer its best feature, Judgment’s cooperative and multiplayer offerings are quite a disappointment. Removing the ability to revive teammates (down and out is gone, which also removes executions) removes a large component of what made the previous games so much fun to play, fostering an isolationist attitude in an already contentious multiplayer arena. Anyone who’s played Gears of War online knows how adrenaline-fueled and ugly things can get, and removing the biggest team concept of modes like Deathmatch remove some of the charm of team play. It doesn’t feel much like squad play anymore, save for OverRun and Survival’s class-based action.

People Can Fly did a terrific job stepping in and developing the look of Gears of War: Judgment. It gets every single bit it can out of the Unreal Engine and the Xbox 360, breathing some life into its war-torn world, a step away from the monotone constructions of previous games. Though there is still a reliance on gray tones and darkness, there are some great uses of lighting and shaders that add a nice touch of atmosphere. Through my testing, it all ran quite smoothly, with the expected occasional stutter here or there online.

The absence of numerous boss encounters and new enemies to fight restricts the enemy design – and audibly, it makes the game sound very similar to past games, with more voice overs marking the beginning and end of each isolated encounter. A few new voices and enemy types doesn’t really do enough to give Judgment a unique feel, however, mostly indistinguishable from other titles except for graphical quality.