9Based on
2 ratings
Login / Register to rate.

Dishonored came out of nowhere to become the surprise hit of 2012. As a new IP developed by the relatively unknown studio, Dishonored’s chances of scoring big with both critics and gamers seemed low. However, through a combination of inventive gameplay mechanics, and a very original setting, the game has managed to prove that innovation is still alive and thriving in big-budget game development.

The game takes place in Dunwall, a dystopian fantasy city where whale oil refinement has allowed for some fairly impressive technological feats. However, a mysterious and very deadly sickness known as the Rat Plague is devastating the population and causing all manner of social upheaval. This isn’t all cut scene fluff either, the setting is rooted deeply into the art style, tone, and most of all, gameplay.

It’s truly refreshing to see a game, especially a new IP, that takes world building so seriously. I’m not normally a player who digs too far into the lore of a title, but I found myself utterly obsessed with exploring Dishonored’s world. The story doesn’t linger much, but luckily, gave me enough time in each level to investigate to my heart’s content. Whether it be the little scraps of books and messages to read, or the hints at the strange religious cult maneuvering in the background, there’s a lot to be found hiding under the surface of this setting. 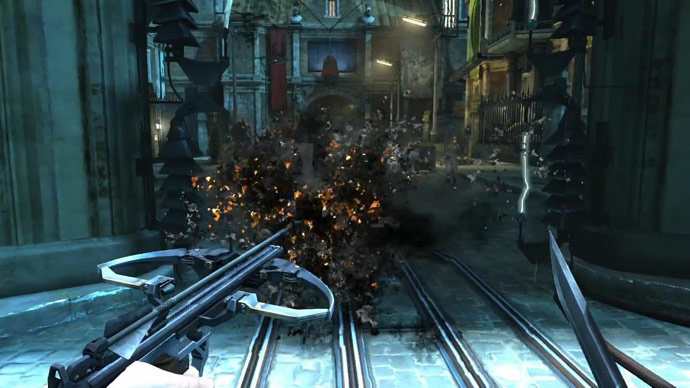 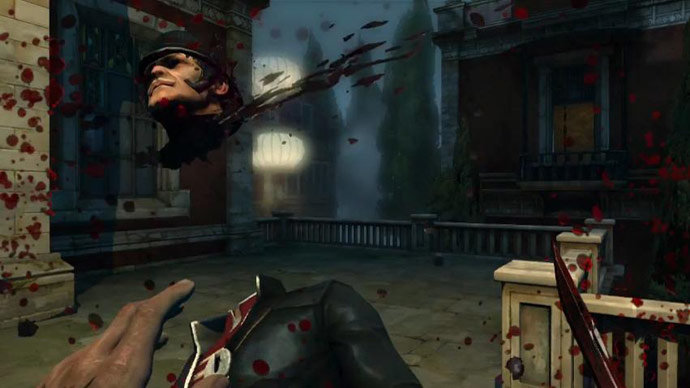 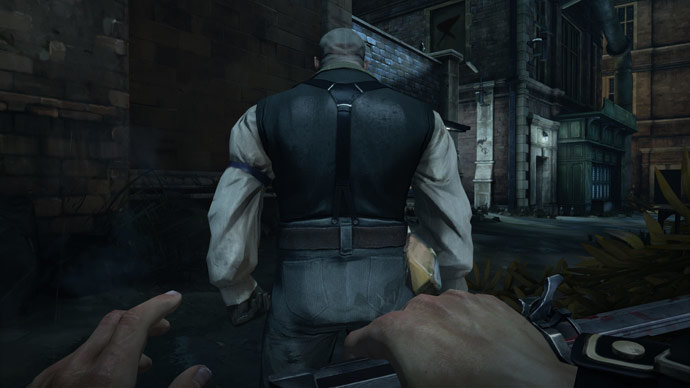 The plot moves along at a fairly brisk pace, and a decent player can expect to be through it in under ten hours. The ending is satisfying enough, with a fair amount of closure, but definitely leaves some questions to be answered in a sequel. Really though, the actual point by point events of the story are by and large not that interesting. What really captured me was the setting. What Dunwall represents is more than a simple framework for a plot, it’s an opportunity for an entirely new and fresh experience. It’s a world that we know nothing about, and thus, manages to be interesting and surprising at every new turn.

When you get right down to it, the combat doesn’t actually have a lot of depth, but my goodness does it just feel right. Something about the weight of those guns and the way swords come clashing together is extremely satisfying.

It’s sort of sad then that playing the game the “right” way precludes you from experiencing that very often. The game points you towards the “stealthy” approach as the correct one. Killing leads to a higher Chaos rating, which means more enemies and a darker conclusion to the game. Because of this, you’re very much encouraged to avoid fights and find alternate routes around enemy positions.

I think I used the pistol maybe two or three times outside of the opening tutorial, and it was to shoot at rats. Stealth might be the good guy approach, but it certainly feels like you’re losing out on a lot of fun. I for one am very much looking forward to an “evil” second playthrough, but I do wish that the game would’ve struck a better balance the first time around.

The absolute highlight of this game though is the Blink ability. It’s a simple tool that allows you to teleport short distances. While that doesn’t sound like a lot, it will find its way into just about everything you do in that game. Aside from the obvious combat advantages of being able to teleport around in a fight, Blink is far more interesting as a means of exploration.

Normally when you’re playing a first person game, if you see a ledge or a room out of your reach, you assume the game doesn’t want you to go there (at least not yet). Putting Blink in the players’ hands though makes all the difference. Suddenly that out of reach area is now just a few hops away. Somehow, this changes everything. The entire map seems to open up. What originally felt like it could be a very linear experience somehow almost takes on the feel of an open world game.

By the end of Dishonored, my go-to strategy for each level would be to neutralize as many guards as possible, and spend a good half hour or more just exploring the environment and seeing where I could get to. From extra bits of story, to hidden caches of equipment, to even full-fledged side quests, the developers have put a lot of effort into fleshing out each and every nook and cranny. Exploring these hidden side areas is optional of course, but I found it to be the most rewarding facet of the game.

Dishonored isn’t a pretty game by any stretch of the imagination. It is however, unique, and rightly so considering how distinctive the setting is. It’s a gritty yet cartoonish style that’s a refreshing change of pace of the brown and grey realism of a majority of today’s shooters. I’d describe it as something akin to Borderlands’ creepy cousin. You know, the one we’re not supposed to talk to. It’s dark and dismal, and yet somehow manages to bring a level of macabre color and flavor to the mix.

It doesn’t hurt that Dishonored finds ways to vary up the settings. Whether it be a high- class brothel, or a lavish masquerade ball, there are plenty of visual design highlights to fawn over. If nothing else, it’s not a look you’re going to forget any time soon.

Dishonored is admittedly a little rough around the edges. The stealth versus combat approach seems like too much of an either/or situation, and players opting to concentrate on one are going to be missing out on a lot of gameplay. And while the story is interesting enough, and the world building is phenomenal, the eight to ten hour experience might not be enough to justify a full-priced purchase for some.

It’s certainly not what you’d expect from a AAA title. It’s not sleek, it’s not polished, and it’s not in the least bit intuitive. It’s even more surprising then that by the end of it, it was probably my favorite title of 2012. What it lacks in shine, it more than makes up for in originality and depth.

It’s a game that manages to bring more to the table than a few new features, it feels like an entirely new experience. In a world of games being franchised to death, Dishonored handedly proves that’s there’s still more than enough innovation to be found in the world of big budget game development. Dishonored is an extremely intriguing new IP, and brings enough fresh, new ideas to the table to make it one of the must-play titles of 2012. It’s not for anyone looking for something familiar and easy to dive into, but if you can take a risk, I’m willing to bet you’ll find it to be a very rewarding experiencing.