If you asked me 5 years ago to talk to you about EA sports’ new hockey game I would probably look at you funny and walk away. Hell if you asked EA sports 5 years ago to talk about their new hockey game they would say “Hockey game? No I’m pretty sure we just make Madden.” Times have changed and now the NHL game is wildly popular among sports fans and frat boys looking to pass the time between drinks. NHL 2013 is the newest installment and shows off better graphics and sounds, but except for some minor in game changes it still feels arcade like and not realistic, which may not be a bad thing.

Sports games in general are very difficult to make realistic and NHL has been no different. NHL 2013 attempts by adding what EA calls “True Performance Skating” which is a first in the series and makes the act of skating itself less arcade and more realistic. No more changing directions easily while going full speed. Like real skating, going fast sacrifices control and having control sacrifices speed. This change is big for NHL and it works well but confuses me a little because it’s the only attempt they made at making the game more realistic. Goalies still pass out covered pucks, passes are still magnetic, and icings almost never occur so it’s strange to see EA only change one thing to try and make the game realistic. 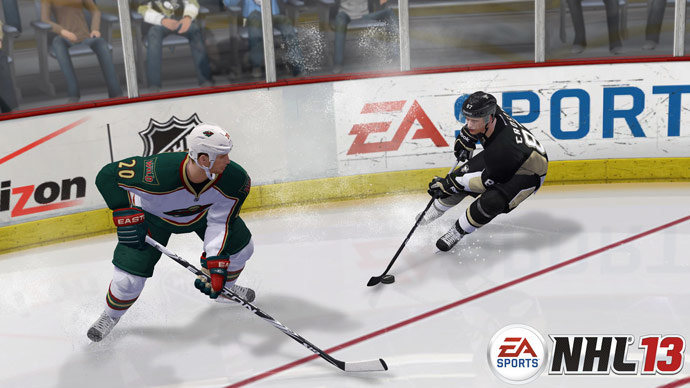 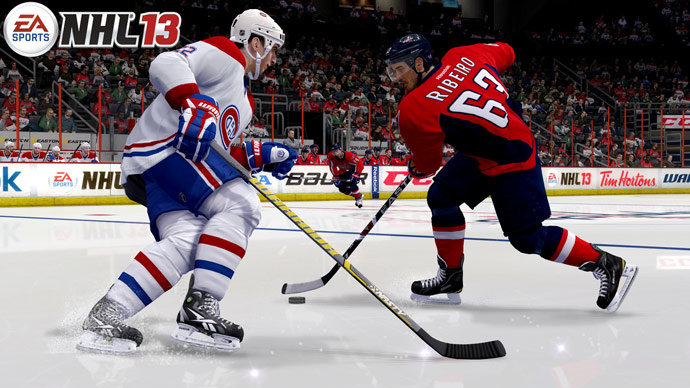 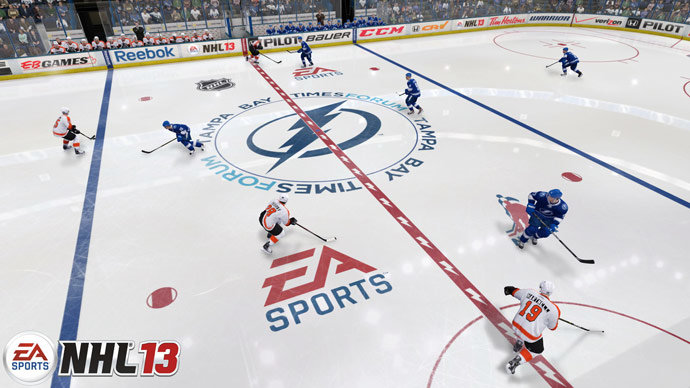 NHL 2013 offers plenty of different modes to play around with, playing a scrimmage with a friend, playing a season of your favorite team, or being a GM of your squad and controlling everything on and off the ice. A new mode is NHL Moments Live, which allows gamers to relive famous moments from hockey’s past. NHL Moments Live challenges players to recreate exact scenarios from the past, scoring a goal in OT with a certain players or maybe getting a historic comeback with 2 minutes to play. Most of the Moments come the past season but now that this season as begun EA will release free DLC of moments from this season that can be recreated.

Gary Thorne and Bill Clemente are back as the commentators and they really help make the experience with there on time commenting and a variety of different lines. The sounds on the ice are great and could be my favorite part of the game. Every bone crunching hit feels real with the help of the sound effects and I find myself taking unprepared shots when a fan screams from the stand “PULL THE TRIGGER”, it’s pretty cool. The graphics are top of the line and except for a few animation glitches (that come with most EA sports games) the game looks realistic even if it doesn’t play realistically.

The menus are pretty basic and easy to navigate. Your favorite team and players will show in the background with stats which is a cool feature. Editing lines can be little difficult for anyone who isn’t a hockey whiz and there isn’t any kind of support feature so that got frustrating.

NHL 2013 offers a good amount of variety online along with its offline options. You can easily jump into a game and find an opponent in a reasonable time. There is an option where different players can control individual skaters and up to 10 players can play in one game. A new mode offered is called GM connected where up to 750 players, yes 750 players, can be in a single league acting as commissioners, general managers, or even players. GM connected is a good idea at heart but there just are not enough die hard hockey fans that are committed to the league and it fails.

The reason I love the NHL games is because my friends and I can play them like we played games when we were growing up. 4 or 5 friends sitting in front of the same TV and enjoying fast and exciting action while all being together. NHL 2013 still allows people to play this way but doesn’t provide enough improvements that make me want to go out and pick it up; I can stick with the previous year’s edition and still have fun. NHL 2013 is not a bad game, it is actually a very good game but only die hard hockey fans will be the ones in line to pick it up.