Five years ago, the virtual basketball landscape was a completely different place. EA and 2K were locked in a heated competition on both the pro and college levels, both studios known to pump out two quality basketball titles a year. Today, the only yearly basketball offering remaining is the NBA 2K series, the Live series failing for a third straight season to finish a retail product. Although this appears to be the trend in sports: exclusive licenses and lack of competition dominate virtual sports these days. However, unlike EA’s many landmark sport franchises, NBA 2K13 isn’t content sitting on the strong foundation they’ve built in the last two games: 2K13 is a definite change of pace from earlier titles, addressing many of its on the court issues, but introducing a whole new slew of off-court problems.

As always, NBA 2K13 basically breaks down into three forms of play: single games against humans or CPU, Franchise mode, or myPlayer mode, which has gone through some noticeable changes. Away from the court, Franchise mode essentially remains the same, utilizing the same robust managerial tools and terrible trade logic to construct and maintain a dynasty through multiple seasons. 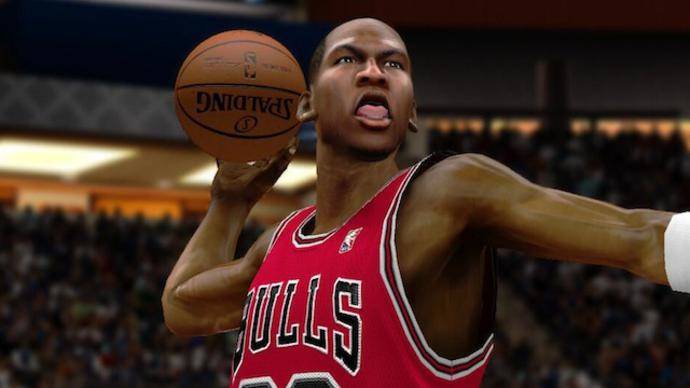 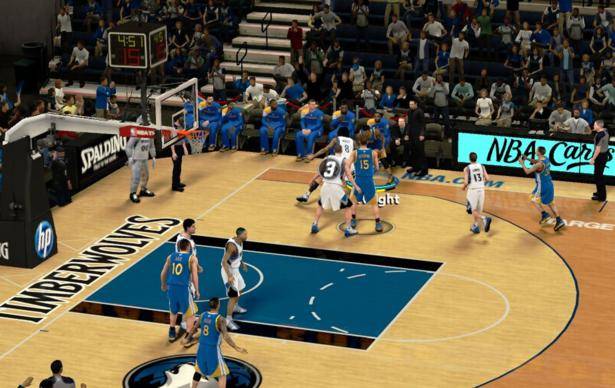 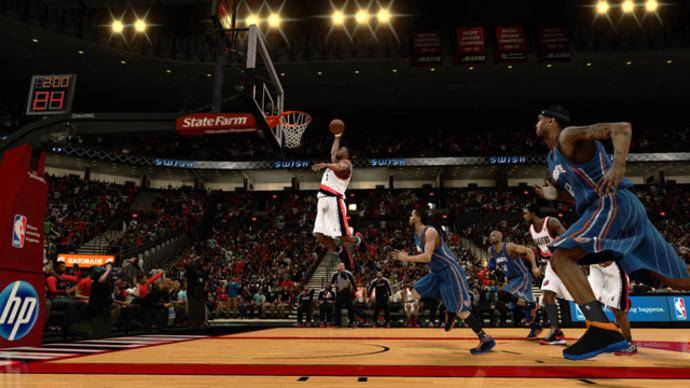 The biggest on-court change to 2K13 is the trigger-activated dribble move system has been replaced with free-flowing dribble mechanics, bringing back the ‘dribble stick’ from previous iterations of the game. That freedom of movement introduces hundreds of new “in between” animations as well – navigating around the court and the rim has never felt smoother in a basketball game, particularly when dribbling around an opponent and driving to the basket: it’s been streamlined into one smooth movement, a flick of the right stick and a press of the shot button to execute a beautifully fluid crossover, sealing off a defender with a shoulder driving into the lane for two. There are a few small technical issues with these new animations (dribbling off feet, not being able to block a dunk attempt, only committing fouls), but it makes for a much smoother looking – and feeling – experience.

There has been some needed tweaking to the on-court AI as well, which is most apparent when playing a career through myPlayer mode. The passing problems of 2K11 and 2K12 have largely been solved, in part due to the tweaked AI team mates, which no longer get in the way or position themselves so players have to make a bad pass. There’s also been an uptick in the default game pace: players are quicker to get out in transition and pick up on defense, which makes for a much more exciting game than the turnover-filled slog fests that frequently occurred playing the computer in previous 2K games.

There’s no denying that NBA 2K13 is the best on-court basketball product 2K’s ever published – but there are some nagging off the court problems that hold it back at times. Chief among these is the new VC currency system, which throws many of the systems in My Player mode off-balance. First of all, practicing is all but pointless – instead of specific exercises providing permanent buffs to skills, they all award 20/40/60 VC, depending on performance. In other words, there’s no incentive except to do the shortest one every time, because there’s no benefit to doing a five-minute drill over a half-minute one.

This VC system carries over into the game’s newest and most useless mode: myTeam, similar to the various card-collecting, team-building modes in FIFA and Madden. But players are given terrible teams to begin with, and because every game is played online, is subject to the less-than-optimal online gameplay – and more importantly, against teams owned by players who can afford to dish out an extra $40 to get all the legends unlocked right away, guaranteeing a player will never lose to a team with the likes of Alec Burks, Kurt Thomas, and Tiago Splitter (three players I began with in the mode). Add in expiring contracts (which are of course renewed by the consumable VC currency), and myTeam quickly becomes a useless mode, hampered by a poorly implemented monetization system that a $60 AAA title really shouldn’t need.

Otherwise, 2K13 is the same off-court product as 2K12, menu-heavy and lacking in any kind of innovative systems or modes. For $10 (free if you pre-ordered the game), there is an All-Star package that has most of the events of All-Star Weekend included (except for the Skills competition). The dunk contest is actually pretty fun to play, utilizing a Rock Band-like button input system to perform increasingly difficult dunks (of which there’s a pretty healthy selection), although good luck winning – the scoring system is so skewed towards the computer, there was a contest where I earned half the score for performing the same dunk as another player, even though I was the first one to perform it.

The 3-point contest is a big swing and miss: it throws away the shooting system and timing of the rest of the game, instead forcing players to use this awkward, broken system that lacks any sort of rhythm or consistency. It’s odd: what should’ve been the easiest of the two All-Star events included to pull off is failed miserably, while the part most modern games avoid (the dunk contest) is executed well, fun but not overwhelmingly challenging.

2K13 looks very similar to its predecessor: some face models still look goofy, but courts and jerseys still look fantastic. Like I said earlier, the new motion-capture and dribble stick make it feel like a completely different basketball game, and the reworked AI combines with it to make for the most realistic-looking (and feeling) basketball experience ever. The three-member commentary team from previous 2K titles return, complete with Doris’s repetitive Sprite Spark of the Game moments and goofy game commentary. This is all good and well – the big problem with 2K13 is the much-hyped, absolutely terrible soundtrack. “Executive Producer” Jay-Z puts together a laughably bad collection of shortened Kanye West songs (‘Amazing’ only contains two lines from verses, the entirety of the song is the chorus), forgettable Jay-Z verses (including the decade old remix to ‘Pump It Up’), and some Coldplay sprinkled on top because Jay-Z’s tight with the band. Where are the classics from Reasonable Doubt or Vol.2? Even as a straight cash grab and marketing ploy, the soundtrack fails to generate any interest, a lackluster collection of songs and artists that pales in comparison with other sports games, especially some of 2K’s previous sports titles.

As always, there’s a lot to enjoy about NBA 2K13: there’s a lot of fun to be had breaking angles and hitting transition 3’s, even more so than in previous NBA titles from 2K and Visual Concepts. But there are some nagging problems away from the actual game of basketball that hold it back at times. Despite some of these flaws, NBA 2K13 remains a must-play for fans of basketball, packed with enough content, legendary teams (although it’s missing both Charles Barkley on the Dream Team and the entire Legend challenge mode of 2K12) and sweet dunks to keep NBA fans engaged throughout the winter and into the spring’s playoff race.