The end of a console generation is a perfect time for an ambitious spin-off title: most major franchises are either completing trilogies or releasing refined, creatively safe iterations of popular titles. Developed by Forza vets Turn 10 Studios and UK-based Playground Games (a team compromising of landmark arcade, rally, and simulation racer developers), Forza Horizon takes its well-refined racing style to the beautiful landscapes of Colorado, with some very interesting ideas on how to bridge the gap between hardcore simulation and casual arcade racer, without sacrificing many of the core mechanics at the heart of the series.

It’s odd to play a racing game with a narrative – no matter how simple the premise is. In Forza Horizon, players live vicariously through a local hipster who travels around the fictitious Colorado terrains, trying to climb the leader board of the Horizon racing festival. Although it’s mostly designed to give the game’s many progression systems some frame of reference, the story feels a bit goofy, especially when racing against one of the many ‘rivals’ who will compete against you in various events. These characters don’t really add anything to the narrative (not to mention being stereo-typically broad and/or borderline racist, in a few cases), except incidentally by being involved in the same races as the player.

Beating these rivals and winning races earns cash and new cars, which can be customized to a player’s desire, both above and under the hood. For gear heads, the upgrade system will ultimately disappoint: the plethora of options are mitigated by the class restrictions of each race, which basically demand that any car used is tuned to the absolute limit of those requirements (a task that the game will automatically do for the player, at no extra cost). 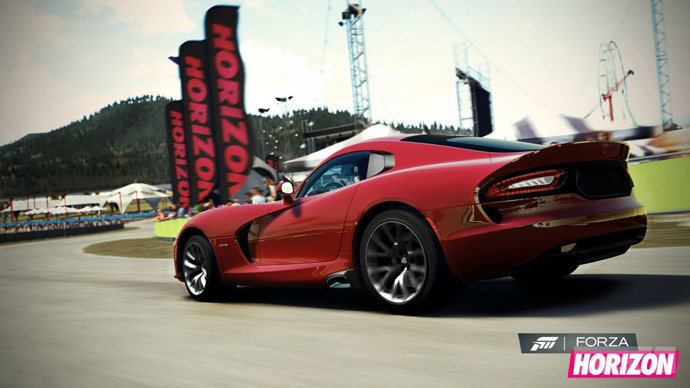 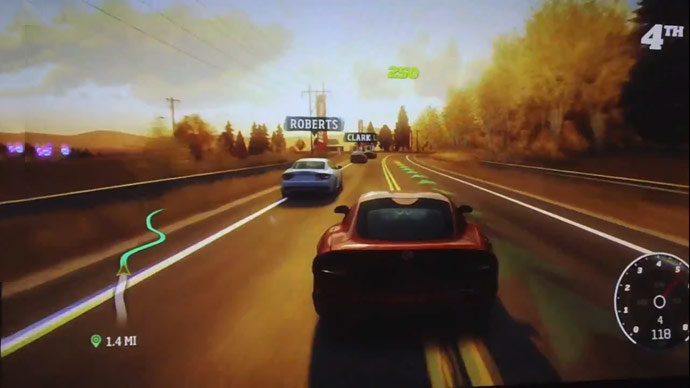 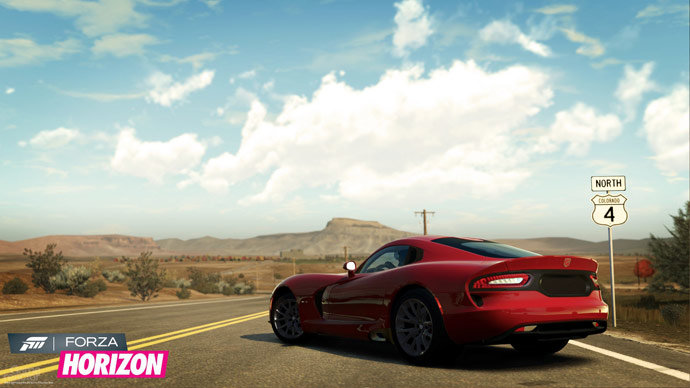 But some of these concessions are to be expected – Forza Horizon is an attempt to streamline the complicated mechanics and physics of highly developed racing games, and make it more appealing and accessible to the average video gamer. This design philosophy is clear in the control customization option, which has a wide variety of assist options and control schemes players can fine tune to their specific skill set. Smartly, this plays into the gameplay: expert controls with all assists turned off add major buffs to cash earned in races, so seasoned racers are rewarded for their knowledge and application of advanced racing techniques during races.

There are 120 or so events spread throughout the main game – each with their own class specifications, and some with unique challenges like racing a jet plane or defeating a rival with a specific car. It might sound a bit thin when compared to the content of its predecessor Forza 4, but Horizon pads its gameplay with the amount of things to do in between standard races. Nine hidden classic cars spread out among the massive world in barns, along with 100 signs players can destroy to discount upgrades and a scoring system for various maneuvers that affect a player’s ranking among the 250 drivers competing in the festival.

Horizon was clearly designed with single-player in mind: it lacks the ingenuity of online integration that other racing titles like Need For Speed: Most Wanted have shown. There are some traditional races and playground-style games, but outside of a few open world co-op objectives, there’s a lack of innovation when it comes to multiplayer options. There are the obligatory online leaderboards, which are implemented in few unique ways: certain zones are designated as ‘speed traps’, which record and rank your speed; and after each race, players are presented with the option to race against a ghost rival, another player whose lap split was just a little bit faster than your own.

Most racing games have to make a choice: be super intricate with physics and the effects of tinkering under the hood, or try to dazzle graphically, with lots of flashy burnouts and lens-flare filled landscapes to make a player’s eyes drool. Forza Horizon manages to do both – car models look terrific, and the massive open world of Colorado (complete with day/night cycle) has a number of distinct areas, which breathe personality onto the pavement (usually the most nondescript aspect of racing titles). Of course, beauty doesn’t come without concessions: having the car damage turned on is almost pointless. It doesn’t have any noticeable effect on handling, and the progressive damage on each model is basically identical, vanilla textures of bumpers falling off and dents appearing in the bumper. But this is a small detraction: speeding along the side of the game’s mountainous region while the sun is setting makes for a beautiful racing experience.

I’m not a gear head, so I can’t speak to how realistic things like exhaust and spinning tires sound in Forza Horizon. The game’s soundtrack and voices, however, suffer from common problems of modern games. The most frustrating of these are the game’s three radio stations, which are about as nuanced as an episode of Family Guy: have your pick between hipster indie rock, Skrillex and the obligatory bass heavy dub step station, and synth-pop Euro-flavored offering called Horizon Pulse. There are only 20 songs on each station, an extremely low number that doesn’t correlate very well the number of hours and virtual miles spent driving around the world, participating in races and showcase events.

Forza Horizon is a very successful attempt at making a streamlined simulation racing game – although now without its flaws. At times, Horizon’s customizable experience and open-world design are quite ambitious, feelings diminished slightly by some of the problematic modern gaming caveats included in its package ($50 for a season pass and 40-something ‘exclusive’ vehicles, the obligatory presence of dub-step and marginally-useful progression systems). But despite those shortcomings, Forza Horizon is quite an enjoyable racing experience, accessible and appealing to the casual racer, without completing sacrificing the intricacies that made the Forza franchise so popular.