Family Guy Back to Multiverse Review

Family Guy Back to Multiverse

Family Guy is one of the top animations on TV and, whether you love it or hate it, continues to pull in massive numbers. It stands to reason that every so often they’ll push out a game. The first attempt at digitizing the most outspoken family on TV, the Family Guy Video Game! for Xbox, PSP and PS2, entertained fans of the show, but critics were far less forgiving. Early last year Activision announced Back to the Multiverse, an adventure in which Brian and Stewie must save their universe from the evil Bertrum. Is this another game destined for mediocrity?

Back to the Multiverse puts you right into the middle of the Family Guy world. Everything you know is there; all of the crazy humour, the characters you know and love, the running jokes that are either repeated too often or still absolutely hilarious (depending on how long you’ve been watching the show and how much your brain can take before you get bored). The developers have done a great job at making the game an extension of the series and even the visual style is spot on. 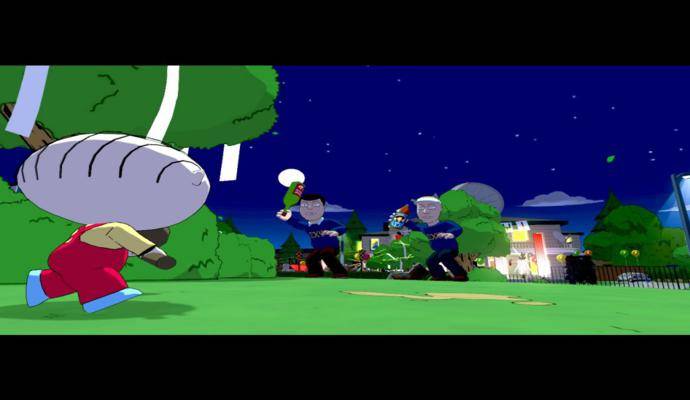 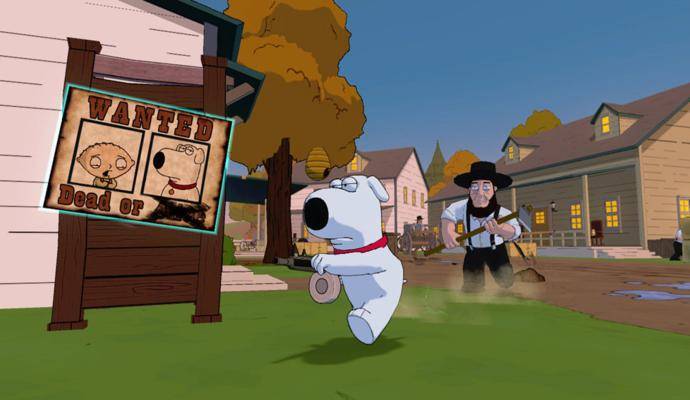 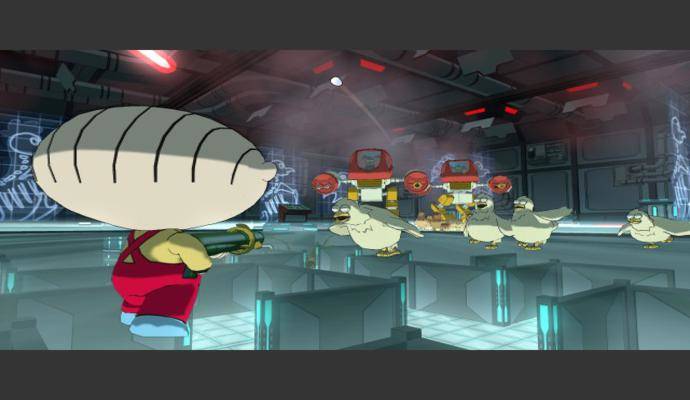 You’ll enjoy it for maybe ten minutes before the realization that you’ve heard the same line multiple times already and that you’re being forced to do meaningless tasks across the same stretch of level. The first universe – in which frat boys rule – has you saving a nerd party gone wrong. This generally involves you entering into another frat’s garden and stealing something they have. You’ll do this for about twenty minutes: fight and collect, fight and collect. Then the second level comes along, and the developers basically drop the collect part.

Honestly, I’m not sure how best to stress how repetitive almost every aspect of this game is. You’ll walk down a stretch of usually straight path, dodging ranged attacks and slowly picking off enemies. Once they’re dead, you’ll turn onto the next bit of path and do the same thing. Eventually you’ll reach an objective and be rewarded with a brief cut scene with perhaps a joke (or even rarer, a funny joke). Then it’s onto the next objective and onto the next path. Sometimes you’ll come across a collectable, usually a reference to the show. There’s actually an awful lot to collect and some cool rewards if you bother to put the time in, but you’ll need an awful lot of patience if you want to see everything Back to the Multiverse offers.

There are a variety of weapons to help you along your way. Brian has a pistol, a shotgun, a sniper rifle – a pretty traditional armoury. Stewie goes for more upmarket weaponry, wielding things like a laser gun and flame thrower. Each has a different feel to it and some will be used as part of general exploration as well. The odd thing is that most of the people you’ll come across don’t have actual weapons, many of them will die before they even get chance to kill you. I’d like to say that getting headshots off of mostly harmless douche teenagers, disabled people and the Amish is a parody of the state of violence in video games and in the western world as a whole, but I can’t believe the developers behind this game came up with anything quite as deep as that.

There’s also the chance to upgrade your stats with money you find lying around and with which you’re rewarded for decent kills. Stewie and Brian can both gain higher health, the ability to hold more ammo both generally and in a single clip, and the chance to collect more grenades. If you haven’t almost got them to their best by the end of the second level, I’ll be very surprised. Worse than that, aside from boss fights – which can be a little tricky if you try to blitz through in the same way you would a normal enemy – there just isn’t nearly enough challenge to warrant the additional health and ammo. The whole upgrade system seems to have been placed in just so Back to the Multiverse can have an upgrade system, and not because it needed one.

In fact, that’s pretty much the whole game summed up. The developers have tried to make an interactive episode of Family Guy and anything extra, like gameplay for instance, has been seen as a bonus. Back to the Multiverse started out as a chance to walk alongside some of the best known animated characters of the last twenty years and it didn’t evolve much further than that. Instead there’s just a mismatch of terribly done features, random situations and when you think you’re through the worst, rinse and repeat.

Perhaps it would be easier to forgive it for being substandard – it’s a tie-in after all – if it wasn’t for the fact that it’s pretty damn glitchy and if the AI wasn’t absolutely abysmal. This is a game of invisible walls, the inability to jump over small fences to grab stuff off the floor, enemies that will dance around you without hitting you or walk into walls until you put them out of their misery. Even when you’ve killed everybody in site, the game will still spew mediocre, over-played jokes at you, almost daring you to just take out the disk and do something more entertaining.

Family Guy really works well as a video game. Something about the colours and broad shapes really appeal. Pixel counters won’t be impressed, but with its very stylized graphical palette and its iconic character design, you’d be able to recognise it as part of the series almost immediately.

The great visuals are actually a bit of a disappointment, because it means the developers tried to do something well and succeeded. Then they sullied it with terrible level design and literally four or five differently designed enemies per world. Sometimes they just get a change of colour. With a little more effort, the graphics might have been the saving grace, but this is a game that was done on the cheap, and even something with promise is tarnished by a general lack of enthusiasm.

With the entire main cast and many of the regulars lending their voices to Back to the Multiverse, it’s hard to knock the audio in this game. It seems like it was basically treated as an episode of the show, both in terms of performance and writing. Most of the jokes could have been from the series and, if heard only once, are about what you’d expect. Some of it is very funny, some will make you smile, some will be met with a frosty shrug. All of it is delivered with gusto by a very talented cast who sometimes just give the tiniest hint that they find it all very, very funny – it’s the same smug attitude of the show itself.

The mixing is where this game suffers and you’ll hear the same line constantly within a level. This is only made worse when more than one line is playing at once, and worse still when it’s all louder than the speech of the main characters, Brian and Stewie. This happens far too often for it to be forgiven.

ack to the Multiverse is a game designed to keep Family Guy fans, especially fans who probably aren’t old enough to actually watch the show, busy for a few hours. There’s nothing more to it; this is a cash-in and it’s a poor one at that. It’s displays the very worst of a show that, at its worst, suffers to get over itself and manages to leave behind everything that makes Family Guy still worth watching after all these years. If you’re not a diehard fan, there’s nothing to see here.