Aliens: Colonial Marines has been in development for over half a decade. Despite the track record of developer Gearbox, and the popularity of the sci-fi franchise, the much anticipated game has been delayed more times than I can count. Considering that, it’s something of a miracle that this game was released at all. Unfortunately, it’s a little less of a miracle considering how surprisingly bad this game turned out to be.

The setup of Aliens: Colonial Marines is actually pretty interesting, especially for fans of the movie series. Promoted as a “true sequel” to James Cameron’s action masterpiece, the story takes place almost directly after the events Aliens. The game puts players in the boots of Corporal Christopher Winter, a marine whose squad is sent in to investigate the U.S.S. Sulaco, and find out what happened to Ellen Ripley and the crew of the ship. Considering that the plot is official part of the Alien franchise’s canon, and that much of it was written by Battlestar Galactica writers Bradley Thompson and David Weddle, this should have been an amazing story. 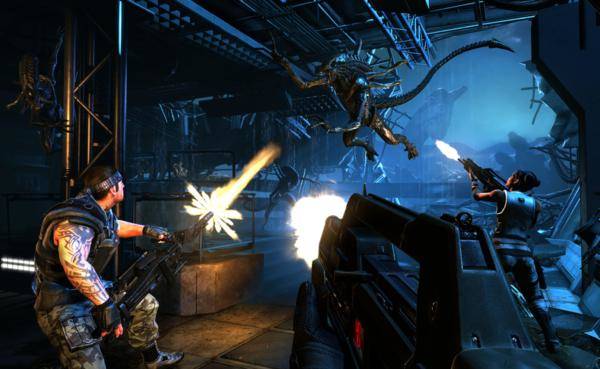 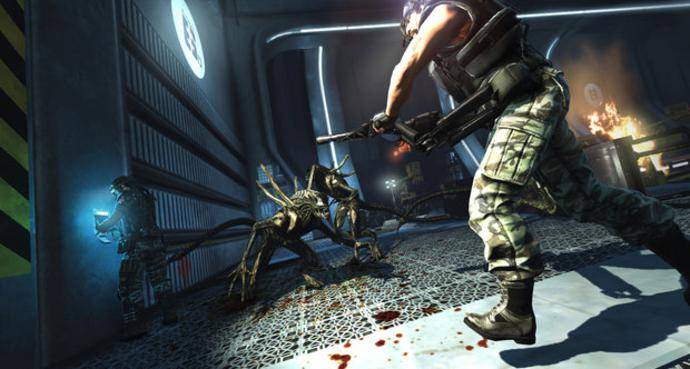 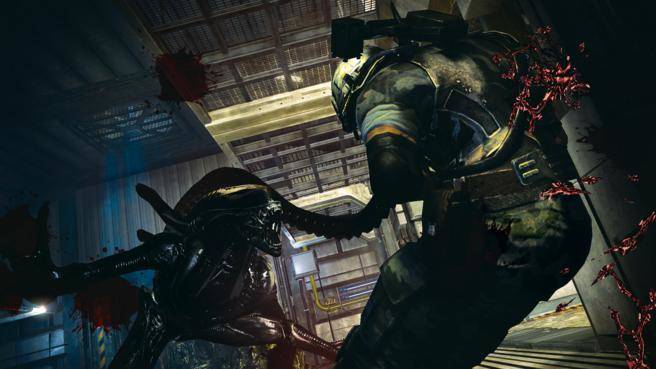 Unfortunately, it completely misses the point of what made the Alien films so memorable. Aside from a pretty well paced intro, the game soon loses all sense of tension or suspense, instead plunging straight into a veritable well of clichés and hackneyed dialogue. This is a game that features lines like, “Raiders 6-5 will wait for you, but god dammit don’t make us wait for you.” It is staggering that someone was paid to write that.

The story continues to devolve as the game runs out of excuses to have you fight aliens, and instead just starts throwing human enemies at you. The pithy excuses for these sequences are about as transparent as the rest of the story; existing simply as a framework for the game’s mindless shooting gallery.

The game also plays up the big mystery of what these aliens are, but clearly, we already know. We’ve seen four Alien films by now (plus two Alien vs. Predator movies if you make poor life choices). There’s no reason to go through the whole song and dance of figuring out what these creatures are and how they breed. The moment a character mentions she woke up with a facehugger on her, we know exactly what that means, why pretend that it’s such a mystery?

To place a rancid cherry on top of it all, the game has an open ending, as if challenging players to sit through another one of these. More likely though, the development team simply ran out of time, called it an “ending,” and wiped their hands clean of this mess.

Gameplay The lack of a story doesn’t necessarily kill and bury a shooter though, it takes some aggressively bad gameplay to really seal the deal. A mountain of bugs, glitches, and some truly confounding design choices really take all of the adrenaline out of the shooting mechanics. The enemy AI is laughably bad, with aliens regularly getting stuck on walls, facing the wrong direction, or getting stuck in an animation loop. It’s even harder to build up any sense of tension when the game throws dozens of them at a time at you. Remember how scary they seemed in Aliens as they chewed through an entire squad of hardened marines? Well, no worries here, a few machine gun rounds is enough to put these rather impotent extraterrestrials down.

Your allies aren’t much smarter. Apparently wanting to finish this terrible game as quickly as you do, they’ll literally clip right through you to open doors that you’re perfectly capable of opening yourself. It’s a good thing then that your bullets pass right through them; is that a design feature or bug? It’s hard to tell.

Otherwise, the game is a fairly standard, if surprisingly unambitious first person shooter. The controls are very typical, although there’s a lack of even fairly mundane features like vaulting and sliding into cover. With that in mind, it’s even more surprising when the game manages to screw up these simple mechanics. Enemies shooting you through walls, uninspired and glitchy boss fights, and an arsenal of incredibly boring guns are among the game’s many, many shortcomings.

While we’re at it, who doesn’t love checkpoint save systems? Well, pretty much everyone, especially when they’re as maddening as this game’s. If you’ve found yourself in a particularly dull section of a level, you can be almost guaranteed that dieing sometime in the near future is going to make you repeat the entire thing.

As for the multiplayer, it’s almost not worth mentioning. The same problems that plagued the campaign mode are still present when you take it online. Considering the overall buzz this game is building as well, I highly doubt many people are going to be playing it for very long.

and Audio The game’s graphics are serviceable. For a AAA title they’re surprisingly dated, but it’s nothing too painful to look at. Unfortunately, sudden frame rate drops tarnish even that mediocrity, as do occasional instances of screen tearing. It’s nothing that absolutely breaks the game, but it’s a lack of polish that really takes you out of the experience.

The audio isn’t much better. It’s nothing atrocious, but the repetitive sounds of lazy audio design soon become remarkably grating. Again, it’s not something you couldn’t potentially get past, but with an extreme lack of anything redeeming in this title, it’s very easy to linger on every little flaw.

At its core, Aliens: Colonial Marines is simply a terrible, terrible game. In between the painful writing and buggy, unfinished gameplay, there are almost no redeeming qualities. At best, some elements are merely passable, and perhaps that’s only in relation to how bad the rest of the game is.

It is actually staggering how awful this game turned out. Considering the license must’ve cost a fortune, and a studio like Gearbox was behind it, it’s inconceivable how half-assed Aliens is. Seven years of development time in such capable hands should have been a masterpiece. Instead, it’s an absolute travesty