Persona 4 Arena, developed by Arc System Works and published by Atlus, takes the stars of the critically acclaimed JRPG Persona 4, and places them in a 2D style fighting game, where they are forced to do battle with one another in order to progress, and must discover why their close friend Teddy is hosting the fighting tournament, P-1 Grand Prix.

The story follows on from Persona 4, and is set two months after resolving the events within the TV world. Shortly after the main protagonist, Yu, returns to his home town, the Midnight Channel suddenly reappears and with it so too does an advertisement for the P-1 Grand Prix, an Arena game show being hosted by a familiar face.

Players are given a selection of thirteen characters, with only four characters available at the start. Persona 4 Arena’s story is extremely text heavy, It took at least 20 minuets from clicking on “Story Mode” until I encountered my first gameplay. Even then, moments of action are hidden within lengthy, although important cutscenes.

There’s plenty of spoken dialogue between characters and the voice acting is pretty decent given what we’ve come to expect from these kinds of dubs. However, the inner monologues, while giving the player a deeper look into the thought process of our chosen character, do tend to ramble on at times. and you’ll begin to question the point of it. It sometimes becomes unnecessary as well, as they build up to “reveals” that are blatantly obvious.

Sandwiched between these thick, wordy crusts is the actual meat of the game. The fighting is, while a little too rare in “Story Mode,” a sight to behold, with fancy moves releasing particle effects all over the place and special attacks filling up the screen. Every character has a certain set of special skills that can can either stun, freeze, electrocute, attack from a distance and/or explode. 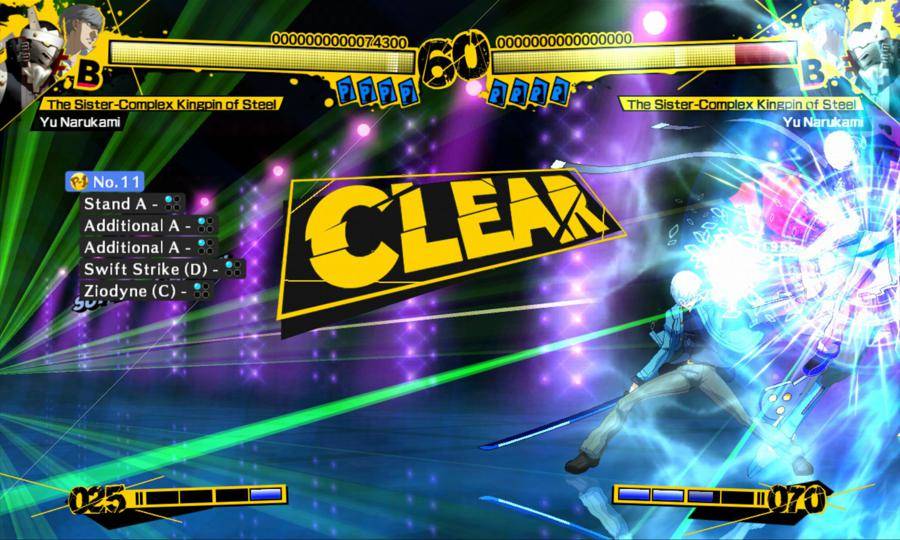 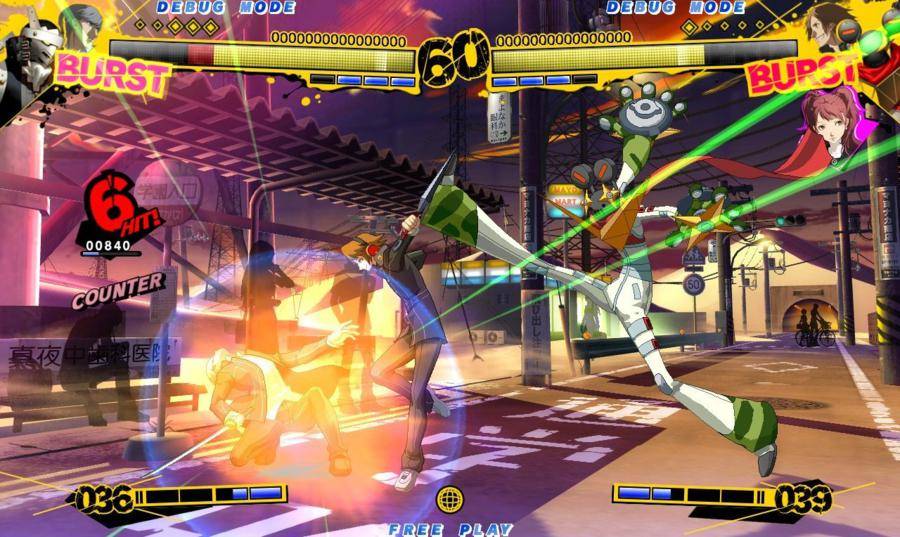 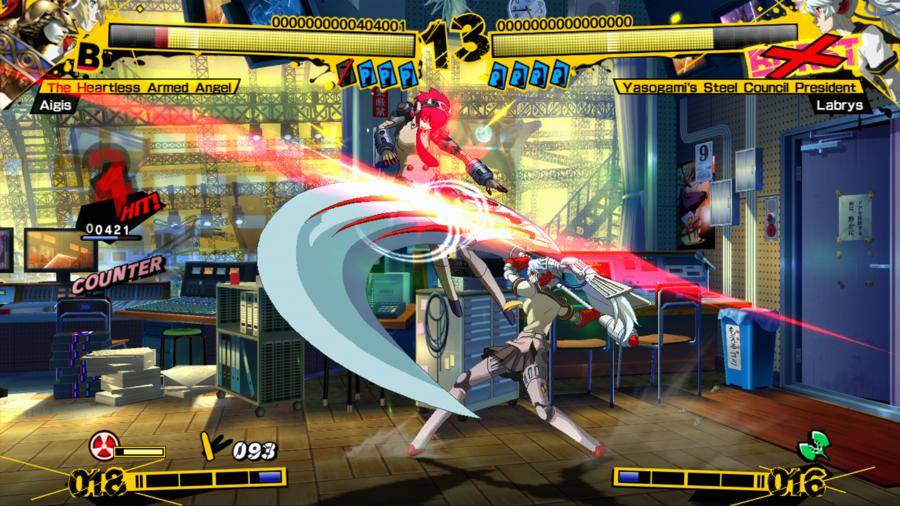 Each character also has their very own unique Persona, The Persona is essentially a special attack but is also capable of being hit by your opponent, and if hit enough times is temporarily put out of action. As well as having both characters individual life bars at the top left and right corners of the screen there is also a special attack bar at the bottom left and right corners of the screen. Similar to those seen in both “Guilty Gear” and “BlazBlue,” these bars also have a numerical value over them that goes up in value when you hit your opponent or get hit by them, and goes down when you use your Persona. If the value reaches (00) then you will be unable to attack with your Persona (until you raise the value enough).

The enemy AI in this game gets pretty challenging as you progress: your opponent won’t hesitate to counter if you mess up. This is the kind of fighting game that forces you to learn and adapt to your opponent, something that will be thrilling for core fans.

Online in Persona 4 Arena is relatively stable, and the character roster is balanced enough so concerns regarding character exploits should rarely be an issue.

All in all, Persona 4 is not only a very fun and engaging fighting game, but a well rounded and enjoyable game. The painfully slow early portion of the story mode and seemingly endless text windows between battles may put some gamers off the story mode altogether, as could the sometimes cheesy and awkward dialogue.However, the game more than makes up for these shortcomings with it’s fantastic core gameplay and interesting and entertaining characters. If you can bring yourself to look past Persona 4 Arena’s minor flaws, the game is very enjoyable and definitely worth your time. If you’re fan of fighting you owe it to yourself to give this game a try.