I would never suggest anyone purposefully be thrown in prison just so they could attempt to get out, and luckily you won’t have to. The Escapists is an excellent title that gives players everything they need to escape, except the ideas and plans; that’s all up to you!

There’s a lot to like when playing The Escapists on Xbox One, and very few issues stand in the way of what will most definitely be an excellent release on Xbox One and Steam.  I received a copy of the game from the publishers, Team 17 – yes, the Worms people –  and got right to work. I was not disappointed.

Don’t go into The Escapists thinking you are going to get a fantastic story. In fact, you won’t find a story at all, which is great. It is not needed, and it’s not provided. Some game attempt to force this and generally distract from what could be a great game.

You are a jailbird. Why, how, and when don’t matter. This title is all about getting out, as quickly and efficiently as possible. You follow a daily prison routine – when you don’t you risk being thrown into solitary confinement – and collect various items that you will eventually use to craft weapons and tools. Then, it is decision time.

Are you going to climb out, dig out, or fight your way out? Are you going to attack all your prison mates to steal their stuff, or will you befriend them? Will you attack the guards? Will you obey orders? It’s all up to you, and the game gives you complete freedom to experiment while retaining all the potential consequences. If you want to beat up Wyatt, don’t expect him to like you. In fact, he will attack you given the chance! So be wise with your decisions, but most definitely experiment. 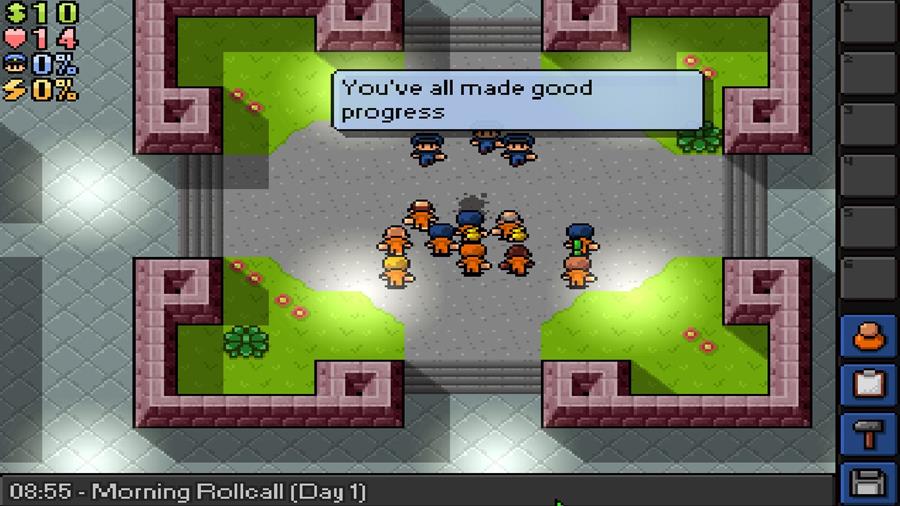 Always be wary of the guards: if one walks by your cell while you are attempting to dig a hole, you go to solitary and your hole gets filled in, even if you’ve been working on it for 10+ in game days! The randomness of the guards can make this game insanely frustrating, but once you get the hang of things, making the most of your days in jail becomes more of an art rather than a repetitive strategy.

Experimentation is what the in-game crafting is all about. Try different combinations of items and the environment to make pick axes, shovels, a shiv, or what ever else you could possibly think of. The crafting system is where my issues with the game come to the system.

I had no idea what to do. I had a log, a comb, a lighter, some duck tape, and a razor. Whether it was my lack of creativity or the games lack of direction, but I couldn’t seem to put items together to create something else. It is here that I wish the game offered a bit of direction within an inevitably directionless title. At the least, I would have liked hints – perhaps from prison mates – on what two items could be put together to craft something else. After time I was able to figure out a few key items, but it was too much time.

For a meager 14.99, The Escapists will provide hours of endless entertainment. Once you’ve broken out of one jail, try again with a different strategy. There is tons of replayability offered here, and the gorgeous, pixelated graphics and nicely crafted soundtrack make the hours go by quickly.

Can my child play The Escapists?

The Escapists deals with mature subject matter. Not only are you in prison, but you are also tasked with beating up fellow inmates and guards, creating weapons to assault others, stealing, and inevitably, escaping. Young teens will enjoy the puzzle and strategic elements, with the help of older siblings or parents.