Captain Toad: Treasure Tracker finally gives Toad his own Mario Kingdom platform to garner a larger fan base for himself; he does almost everything right in his first, Toad-centric adventure. While Captain Toad doesn’t carry the hefty price tag of some of Nintendo’s other franchises, there is plenty of content here to justify a 39.99 USD price. If you are looking for something other than Smash Bros to play this holiday season, you may want to grab a copy of Captain Toad and kick back on the couch for this 10-12 hour adventure. Move your way through the level collecting all three gems, hidden golden mushrooms, and the final gold star. For extra game play, go ahead and complete the optional secondary objective, which at times can be incredibly frustrating! Despite a few camera issues, Captain Toad is another home run title for Nintendo in 2014.

Captain Toad is all about giving you the freedom to maneuver the camera around the level to find each and every collectible item. This can all be done even before you move Toad since the game doesn’t give you a time limit you need to beat. It’s great having the ability to fully understand the level, attempt to locate the collectibles, all before you begin attempting to complete it. This doesn’t work on every level, but does on many.

The price is right on Captain Toad. Although this game comes in 20.00 cheaper than your average Wii U title, it doesn't mean that it is a budget title

Take note, however, that Toad and Toadette lack the basic adventurer skills. There is no jumping and no physical attacking in this game, so be prepared to sneak past enemies or find those elusive hammers and wreak havoc on the world around you. The lack of a specific attack button will, more than likely, be the biggest challenge for most players to overcome.

Captain Toad is a puzzle game where some aspects of the level are not as they first appear. A certain area of the map appears easily accessible, but often will require a bit more thought – and camera moving – to find the exact way through the maze. The controls are simple enough that I would classify this as an instant pick-up-and-play experience.

Captain Toad also makes good use of the game pad, which is the only controller option this game has. Many level require players to move blocks, all with a simple stroke on the touch pad screen. It’s not the major game pad integration we have been craving for in a first party Wii U game, but it is a step in the right direction.

The controls is where my problems with the game lie, however. Despite it being pick-up-and-play, Nintendo limits some of your camera control and I’m not completely sure why.

Problems that Just Shouldn’t Be

My biggest issue with Captain Toad is that it is marred by issues that just shouldn’t be there. While the game centers around moving the camera, I don’t understand two things: first, why there are only two zoom modes – zoomed in close or zoomed out far – and second, why there is no option to turn off the gyroscope controls. 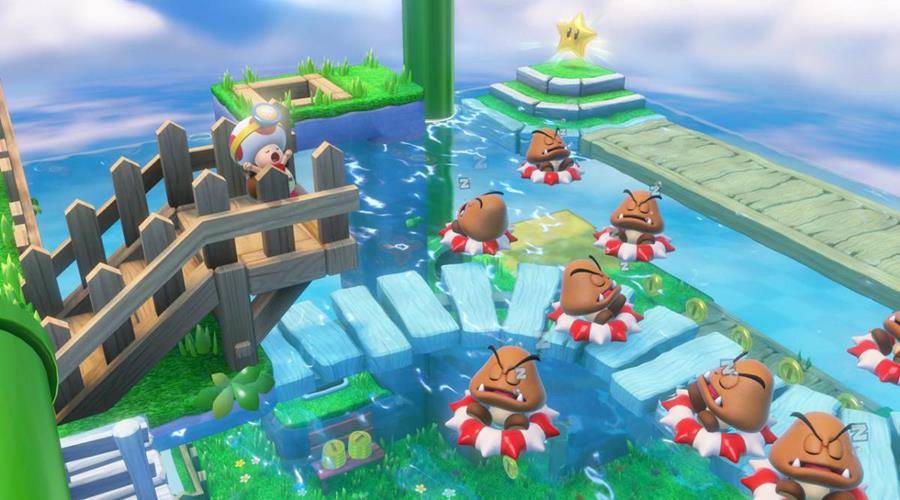 These two issues for me are not minor. There doesn’t seem to be any reason why Nintendo would not give you full freedom to zoom in and out when trying to figure out the levels. The inability to turn off the gryroscope controls is also incredibly infuriating. Every time I shift my position on the couch, or went to pass off the controller to a friend to try to beat a level I couldn’t, everything went crazy, which means I had to reset the camera to my desired location. It seems minor, but it is incredibly aggravating.

So Much Charm and Enjoyment

The price is right on Captain Toad. Although this game comes in 20.00 cheaper than your average Wii U title, it doesn’t mean that it is a budget game. For what you get, it is priced rather aggressively. If you are short on money this holiday season but want something to play, you won’t be disappointing here.

Captain Toad is cute and charming. If you weren’t a big fan of Toad and Toadette before now, you will be after you play. So will the rest of your family, young and old alike. Why? Well, this game is not very complicated, and therefore, there is potential for mass appeal. There is even a little carryover from previous Mario Wii U games, so there is that familiarity for fans of that title as well. While the game is based on the Captain Toad levels found Super Mario Bros 3D World, they aren’t the only carry-over ideas. A few of the special items introduced in Super Mario 3D World are also available in Captain Toad. Early on, you will be introduced (or reintroduced) to the cherry, a item that duplicates the current number of characters on the screen. Grab one cherry and you will get two Toads to play with, adding an extra level of difficulty to the current stage.

As the first in a hopefully long franchise, getting the core game play is the priority; Nintendo definitely delivers that, regardless of any camera control issues I have. The game offers a fair bit of replay-ability as players traverse the level again and again attempting to collect the three gems, golden mushroom, and the final star. The secondary objectives are also great additions, although the challenge of the game ramps up significantly when attempting to complete some of them.

Captain Toad is an outstanding title that Nintendo priced exactly right. While releasing so close to Super Smash Bros Wii U might be a mistake in the end, I hope this title gets the critical acclaim that it deserves. Captain Toad has its camera issues to be certain, but never the less, it is an experience that is definitely worth both your time and money.