Yacht Club Games have done a magnificent job on creating the retro inspired 2D world of Shovel Knight. They have taken everything that works from the games of yore, and have compiled those ideas together to create something fascinating and new in its own right. At its heart, Shovel Knight is a platformer that echoes the NES classics of Mega Man, Duck Tales, Zelda 2, and Super Mario Bros. 3, then takes everything that works well within those games and throws away the tedium that can become infuriating.

As the Shovel Knight, you will slash a multitude of enemies with your shovel, pogo bounce on cannonballs across pitfalls, and uncover a plethora of secrets. You’ll find everything from treasure chests to new items that grant Shovel Knight powerful abilities to help aide him on his quest to save his beloved Shield Knight from The Enchantress and her 8 knights. Shovel Knight is a game that is fluent in the language it speaks and offers a surprising amount of freedom in its 2D plane of existence; basically, it’s everything that I have ever wanted in an 8-bit platformer and then some.

A Love Letter to Gamers of the Late 80’s

Shovel Knight takes itself seriously in the vein of NES media that came out of the late 1980’s, and the game really does a stellar job at creating a unique world wrapped within all of the nostalgia of Castlevania 3 and Mega Man 2. Although Shovel Knight never comes out and directly pays any homage to the Belmonts or the Blue Bomber, it just simply borrows the classic gameplay concepts and level design that made those games so memorable and combines them into one package. It’s the combination of those same elements that make Shovel Knight its own unique and memorable entity in the platforming genre. It’s what makes it a masterpiece. One thing is for certain, future games in this genre will surely be held up to the standards of Shovel Knight. 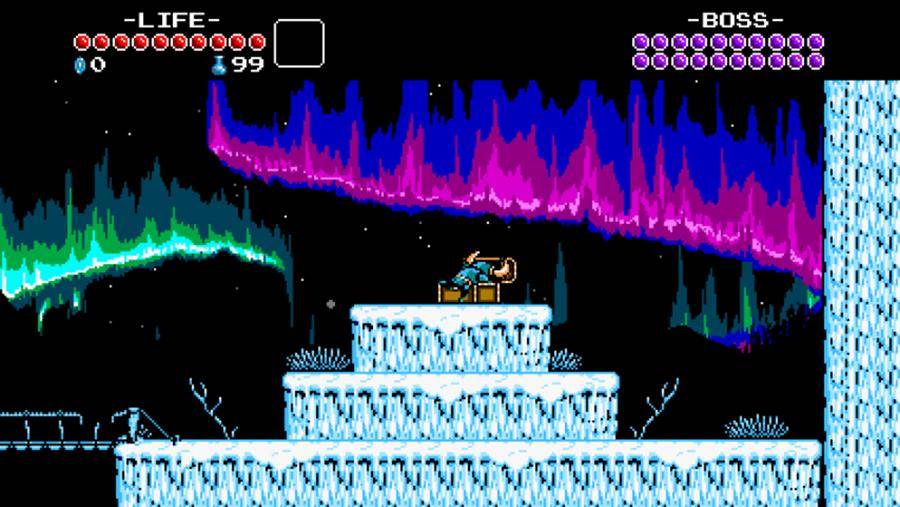 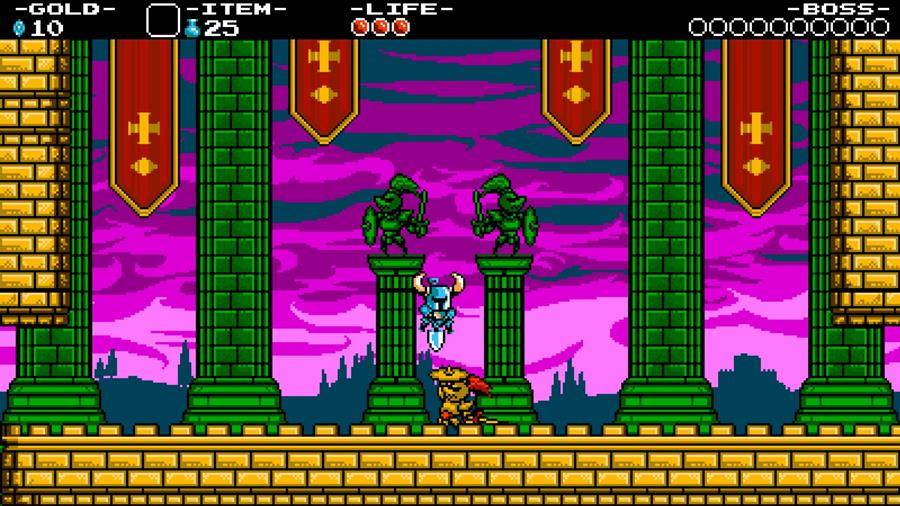 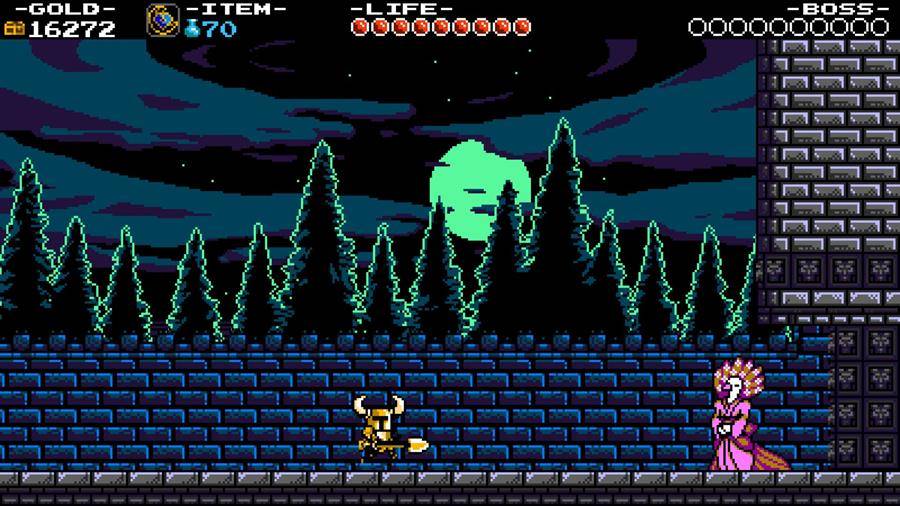 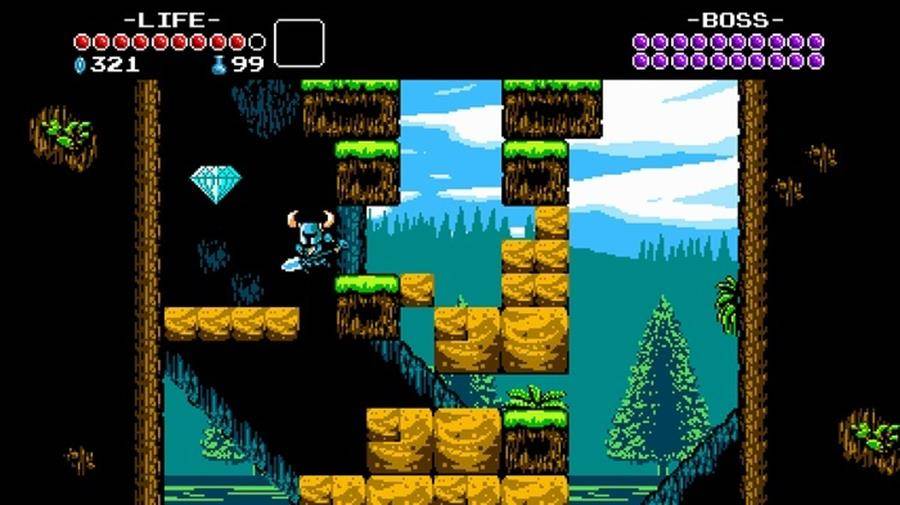 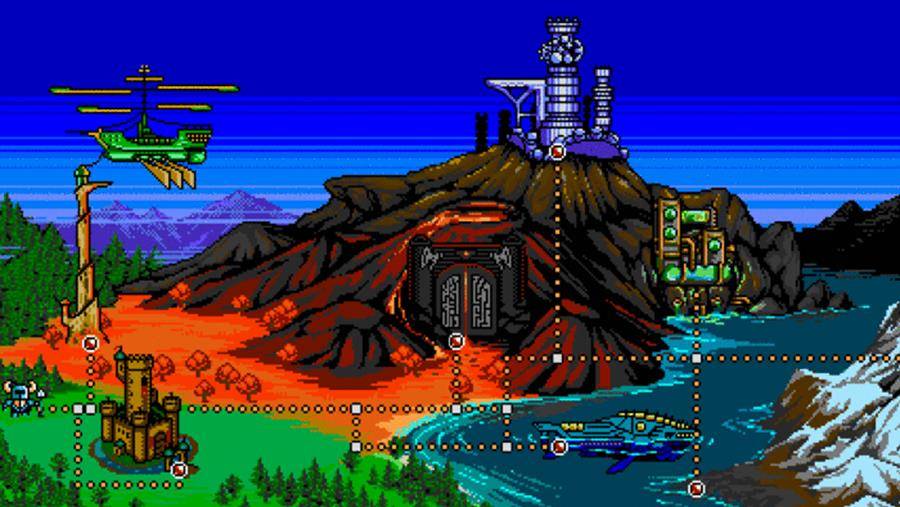 Yacht Club Games was shooting for a game that resembled a 2D NES platformer as close as possible, and they achieved it on so many different levels. Through the timeless inspired art direction that envisioned capturing the NES 8-bit aesthetic, Shovel Knight practically mirrors the allotted color pallet of The NES system which used a collective pallet of 64 colors. Shovel Knight roughly uses a 66 color pallet and this added touch really makes the game pop on screen.

The audio of Shovel Knight is superb and is equally if not more impressive than its visual counterpart. Shovel Knight uses an assimilated VRC6 sound chip which is the exact same chip used in Castlevania 3. It’s a spot on representation of what the games of our childhood sounded like and it just makes Shovel Knight sound like Nintendo. The stellar soundtrack of Shovel Knight was composed by a collaboration of Jake Kaufman (Contra 4) and Manami Matsumae (Mega Man) and their influence shines beyond the game itself. The Shovel Knight OST is listenable under any circumstance if you love Mega Man and Duck Tales tunes. Highlights are Lost City and Pridemoor. It’s pure 8-bit bliss at every corner.

Shovel Knight plays like Scrooge McDuck in Snake Mans Lair, and its a really awesome combination

The gameplay is truly where Shovel Knight shines. The controls are tight and very basic: B jumps, A attacks, and Down on the D-pad while air born performs a downward thrust that you can use to “pogo stick” on enemies and various hazards. If you press Up on the D-pad while pressing A you use an item that you can select from the item screen via the menu screen or can also quickly be accessed on the Gamepad which offers a touch screen menu like The Legend of Zelda Wind Waker HD. Items are hidden throughout various levels and offer Shovel Knight new abilities such as the Phase Locket that allows you to cross over spikes and other dangers unharmed for 3 seconds, or the Air Dash that allows you to quickly dash in midair. Shovel Knight plays like Scrooge McDuck in Snake Man’s Lair, and it’s a really awesome combination.

With gameplay elements as timeless as Mega Man’s, it’s safe to say that Shovel Knight isn’t an easy game by any means. However, what Shovel Knight does well is avoid forcing the player to endure cheap deaths that are rather frustrating, something that many other retro inspired 2D platformers of today pride themselves on. Most, if not all, of your deaths will come from your own hand and not some unseen switch that triggers a death spike. This puts a real sense of control in the player regarding the difficulty of Shovel Knight because it is truly a rewarding experience when you complete a part of a level that you had trouble with just moments before. In short, it’s not the game’s fault that you have to try again.

There are no lives in Shovel Knight, and when you die, the player simply re-spawns at the most recent checkpoint triggered and they lose some treasure. This can be recollected if the player were to reach the spot they died at and touch the floating money bags. This rewards the player for progressing instead of taking away lives and continues, it gives them a chance to regain what they lost. What’s even more interesting about Shovel Knight is that you can choose to destroy the checkpoints for more treasure, which adds a whole new level of difficulty to the game. Do you destroy one so you can buy an item from the hidden item shop? Or do you preserve them if you feel that you won’t make it past the next leg of the level?

Shovel Knight is the game you saw in your mind as a kid as opposed to the one that was actually on your screen. - Sean Velasco Yacht Club Games

Shovel Knight reimagines the platforming genre by redefining what it means to be a platformer. It does this by allowing the gamer to choose to hunt for items, stock up on health or magic, and even decide what level that they attempt next. The game has a sense of freedom outside of levels, thanks to the overhead map, instead of a rigid start to goal as most platformers do. You can complete level 2 then go to town to buy an extra life bar, and then go to level 1. The later levels are locked until you complete the earlier ones so it’s not entirely a free roaming experience.  Shovel Knight is not about following a certain algorithm to finish the game; you can choose to complete side quests or altogether avoid them. You can even go back to recently completed levels if you missed an item or want to find more treasure. These fresh ideas are what truly sets Shovel Knight apart from the rest.

Shovel Knight’s gameplay is as fun as it is addicting. The first time you uncover a secret and unveil a treasure trove by bouncing off of an enemy to reach a higher platform, you will soon be on the lookout for other hidden goodies that include collectables and hidden items that grant new abilities. After you beat the game you are offered an option to play a New Game + with harder bosses, fewer checkpoints, and no health recovery items which provides a more difficult experiences if your first run wasn’t challenging enough. The game also currently includes 45 in-game achievements ranging from spend a certain amount of money at the shops which you can achieve without much effort at all, or break all of the checkpoints in the game which would take  a lot of practice to complete each level and boss knight without dying. There are also rumors of DLC concerning new knight bosses, levels, and achievements, so Shovel Knight seems to have enough support at the time of this writing for future expansion.

As a gamer that has spent many years revisiting franchises like Mega Man, Ghosts and Goblins, and Castlevania, I absolutely adore this game. Shovel Knight isn’t set to an outrageous difficulty as any of the previously mentioned games, but what makes it so special is that it offers the option for higher difficulty through a New Game +, achievements and breakable checkpoints. You can opt to skip treasure levels that require items if they are too difficult, you can opt to equip the perfect suit of armor for the right situation, and you can save, replay, post to miiverse for hints, or challenge others on the 3DS with the Street Pass feature.

Sean Velasco of Yacht Club Games said it best “Shovel Knight is the game you saw in your mind as a kid as opposed to the one that was actually on your screen”. What I truly love about this game is the fact that it is the perfect NES experience without the limited lives, backward controls, cheap deaths and long passwords that hindered hundreds of platformers from our past. Shovel Knight is truly the beginning of a new age of gaming and it is a complete mastery of the genre in every sense of the word.