Article Update 2:30 PM Eastern: From Nintendo, “People who buy the game will receive access to a free download that adds a new mode, a new weapon and the option to select music during a stage to add to the Hyrule Warriors experience.”

Nintendo isn’t known for branching out and trying new things. They milk their franchises, and not in a bad way. While many companies tend to produce shovelware, where the brand sells the game rather than the gameplay itself, Nintendo almost always brings AAA experiences to the table. With Hyrule Warriors, however, Nintendo has done something unprecedented for the company: they handed one of their most important franchises to another company to use. While my skepticism of this title was off the charts, I was intrigued during an E3 event in Toronto and was sold on it this past week as I played the game for this review.

Nintendo doesn’t share their characters often. Not surprisingly, Nintendo knows that if they control the games, they control the perception of the franchise. This was definitely a bold move by the company, but handing the game off to the developers of the Dynasty Warriors franchise was probably not that risky of a move. And that calculated risk is sure to pay dividends for the company in the long run, potentially resulting in more ideas like this.

This was definitely a bold move by the company, but handing the game off to the developers of the Dynasty Warriors franchise was probably not that risky of a move

I’m not sure there was a single person out there that was really dying for a Dynasty Warriors – Legend of Zelda mashup game, but this is what we have been given. It definitely works. Even as I look back on all the franchises Nintendo owns, the Legend of Zelda fits the Dynasty Warriors blueprint perfectly; it really feels like care and dedication was put into both aspects of the game – Dynasty Warriors gameplay and Zelda fan service – which shows that this was not a title rushed out to retail.

New to Some, the Same for Others

If you’ve played the Dynasty Warriors series, Hyrule Warriors is not going to be anything new. All the same mechanics are there; they’ve just been Zeldified. If you love Dynasty Warriors, you’ll probably enjoy Hyrule Warriors. If you don’t like the franchise, there really isn’t any reason for you to grab this title, even though the fan service is definitely there for the Legend of Zelda crowd. 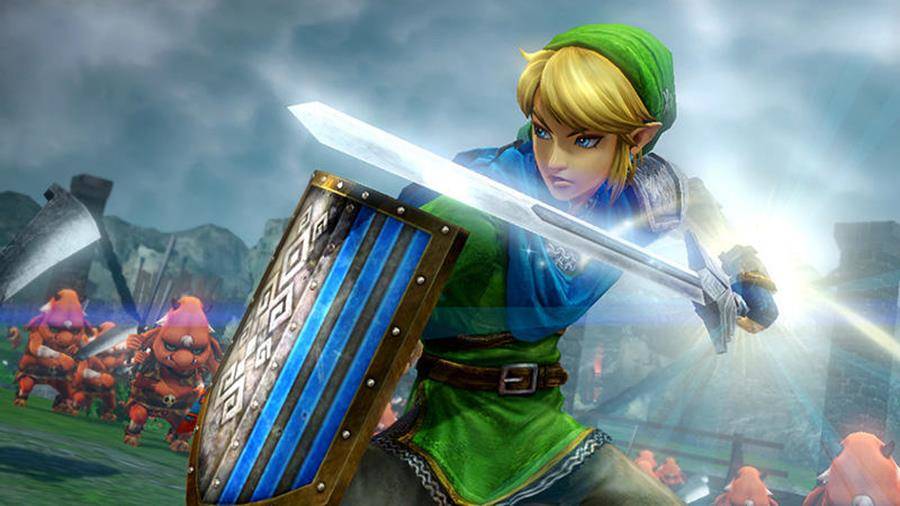 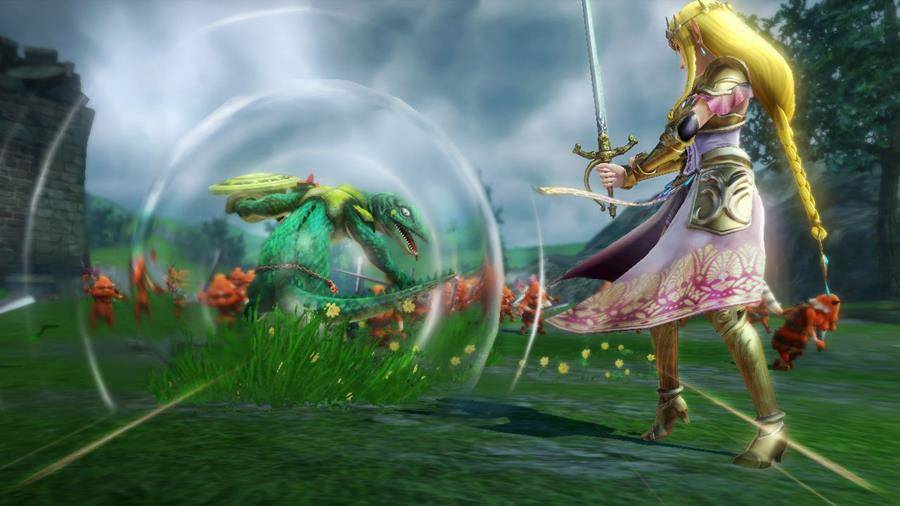 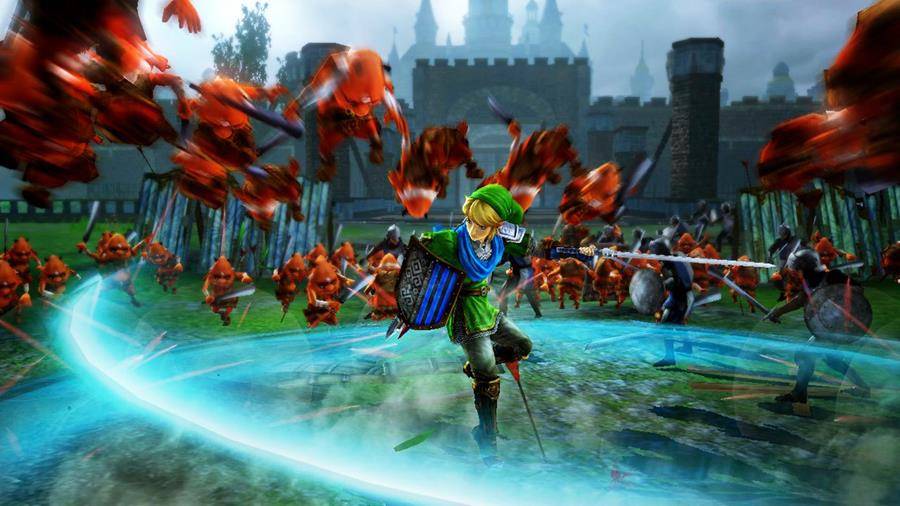 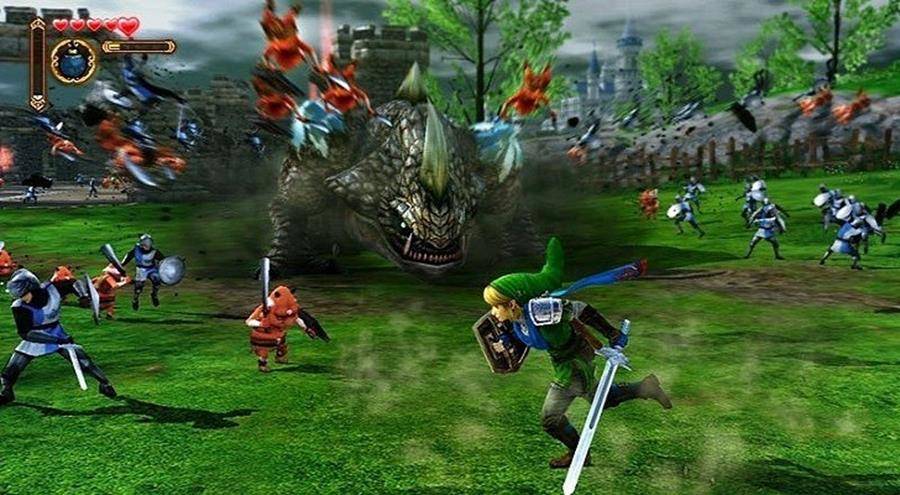 The gameplay for Hyrule Warriors is really simple and easy to grasp. It is a button masher, although a very satisfying button masher. Jumping between using my weapon and power-up moves seemed seamless, and from the beginning, I never felt lost or overwhelmed by the button combinations that resulted in more powerful attacks.

I really enjoyed choosing my hero – there are thirteen to choose from! – selecting a weapon, and jumping into the worlds of Hyrule Warriors. The levels span three Legend of Zelda games – Orcarina of Time, Twilight Princess, and Skyward Sword – and visits many notable areas from each game. While playing, I longed to battle in other areas not available in this game (Clock Town anyone?) but this isn’t a knock on the game itself.

The story is alright although not terribly engrossing, but the goal of the game is to plow through hundreds of enemies in a span of a few minutes. It’s the fan service that makes this game memorable. While some have criticized the boss battles as being underwhelming, I enjoyed understanding instantly how I was suppose to deal with a boss, based on my experiences with other games. For example, when King Dodongo landed in Hyrule Field, I knew instantly that I would have to throw bombs in his mouth, wait for them to explode, and then hack him up until he died. The other great fan service stems from the outstanding soundtrack and getting HD recreations of some of the best places in Hyrule. Lake Hylia, for example, is particularly stunning.

There is a lot to love here - the Zelda music is amazing! - and anyone with an itch to play some Zelda will probably find something to love

Plowing through hundreds of enemies is insanely satisfying. The crafting system can be really fun as well, although it takes a bit of replaying to get all the necessary materials to craft better, more powerful weapons. When players are done with the 10 hour long campaign, there are other modes to jump into, such as the insanely addicting Adventure Mode. Adventure Mode tasks players with completing a number of objects in a set period of time. The first level, for example, asks you to kill 300 enemies in ten minutes. While it sounds easy, there is a fair amount of challenge here that isn’t present in the main game. One of the best parts about Adventure Mode? The map you use to jump into each challenge is a recreation of the Old Legend of Zelda map; the developers again served up fan service to the extreme.

There is also a great multiplayer component, with one person playing on the TV with either a controller or Wii-mote, while the other person uses the screen on the gamepad. I felt this title was much more enjoyable with someone else in the room; despite some serious lag issues at various points during a level, I had the most fun while I played with others as there is an added competitive-cooperative feel to the game.

Nintendo has also promised DLC for this title in the future which will add to the amount of content you will be able to play. If you register your game with Club Nintendo before October 23rd, you will receive in-game costumes for Ganondorf.

Hyrule Warriors is not perfect. Although this game screams multiplayer, there are times when the game slows down to an excruciating pace when multiple enemies join you and your multiplayer partner on the screen. The graphics – aside from the heroes and bosses – are also incredibly underwhelming, reminding me of games I played during the late days of the GameCube and early days of the Wii. However, there is a lot to love here – the Zelda music is amazing! – and anyone with an itch to play some Zelda will probably find something to love. For myself, this will be a game I return to time-after-time, using different characters and different strategies to complete the missions.