Mario and friends are back, in a brand new 3D adventure. Belonging to the same family as the 3DS’s Super Mario 3D Land, Super Mario 3D World adds in a massive focus on co-op and a few new abilities that make looking back in on the Mushroom Kingdom well worth it. There’s even some actual plumbing, which is probably a pretty major twist.

Is it going to sell consoles? It shouldn’t, even if it does, but current Wii U owners won’t be disappointed about another strong platformer joining their rather thin line-up.

Mario no longer is the lone hero, inexplicably saving the Mushroom Kingdom over and over again. These days, he usually likes to invite along his friends. His brother, Luigi, is a given and Toad is naturally along for the ride, but for Super Mario 3D World the developers thought it’d be nice to let the girl come along as well. All four characters are playable, and you can use pretty much any Nintendo controller from the last eight years or so.

It would be unfair to say the Wii U isn't the home of some decent titles, and Super Mario 3D World would be comfortable at the very top of that list

This means that, if you’ve ever owned a Wii, you can play co-op, which is where Super Mario 3D World really shines. You can play with Wii Remotes, Classic controllers, Pro controllers and, of course, the tablet itself. Playing alone is passable, and the gameplay is strong enough that it remains fun, but it’s been built with groups of friends in mind and that’s how you should play it, ideally.

Anybody familiar with the franchise will be right at home. Instead of running left through an increasingly difficult set of levels, however, these are all 3D. Instead of it being a flat sidescrolling platformer, you must run and jump in what is effectively a third person action game. It works, for the most part, although it adds a new level of difficulty to the overall game. (You must learn how to time your jumps and accurately land, which would be better if there was actually 3D, as on the 3DS.)

There are short 2D segments within levels, but these are the exception.

Controls are tight and the graphics are beautiful, often surprisingly so. It’s easy, at first glance, if you’re looking at screenshots, to dismiss this as another Mario game – nothing seems to have been added in the transition to HD. When you see some of the lighting effects, or some of the unique locations, you’ll be surprised by what Nintendo have managed to do, and perhaps a little angry they haven’t done it more often. Wide open fields and neon wonderlands are few and far between, but when you see them, you’ll see that the Wii U is capable of more than it’s letting on. 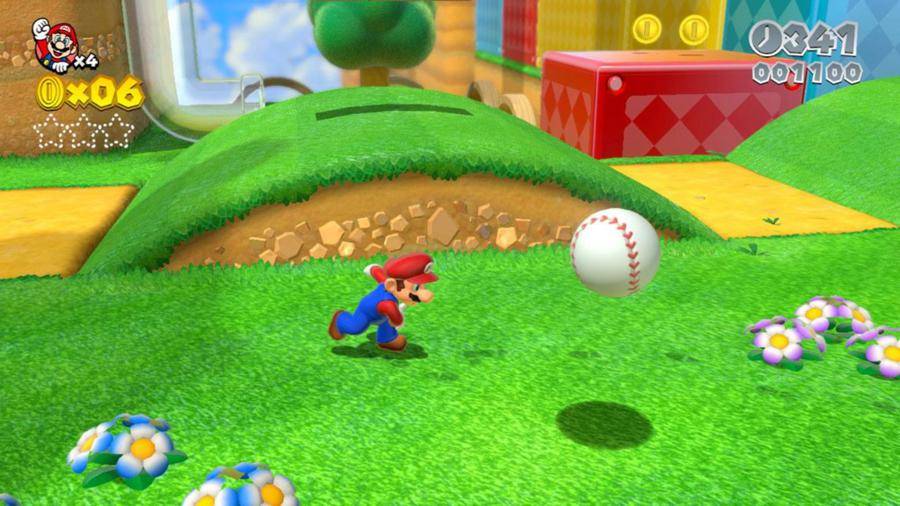 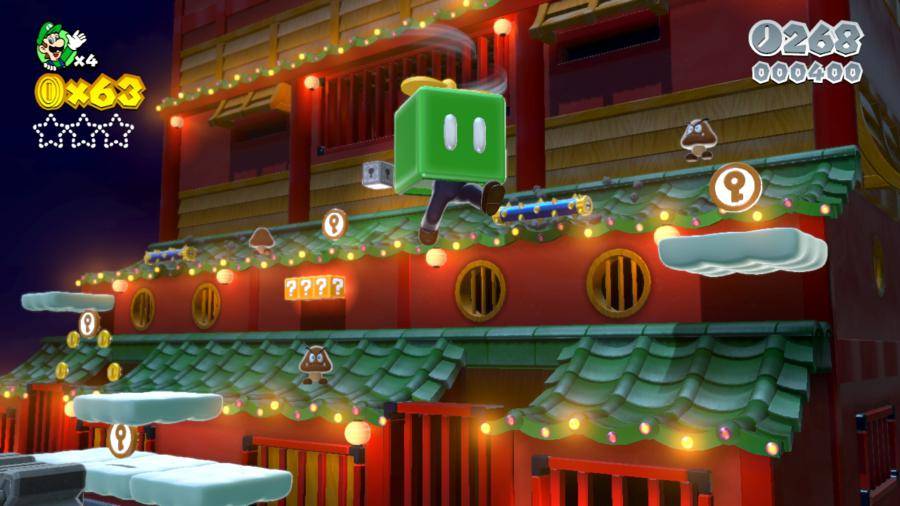 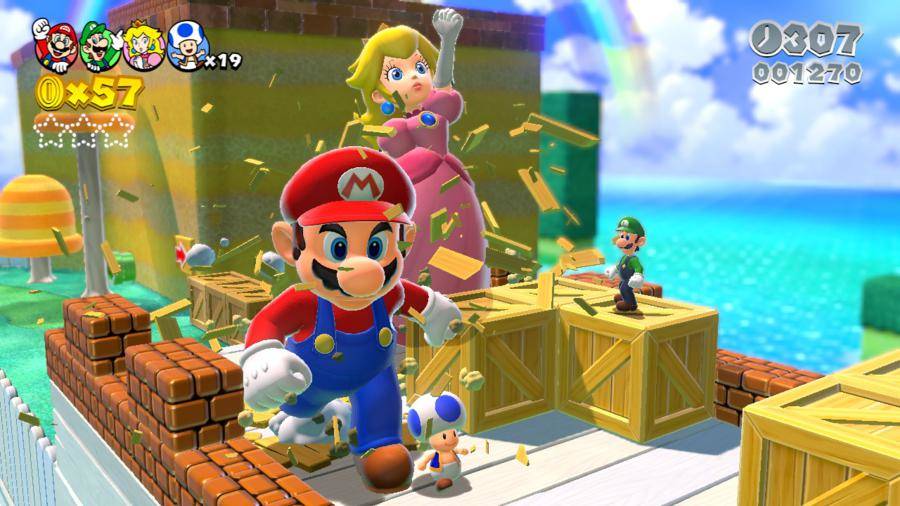 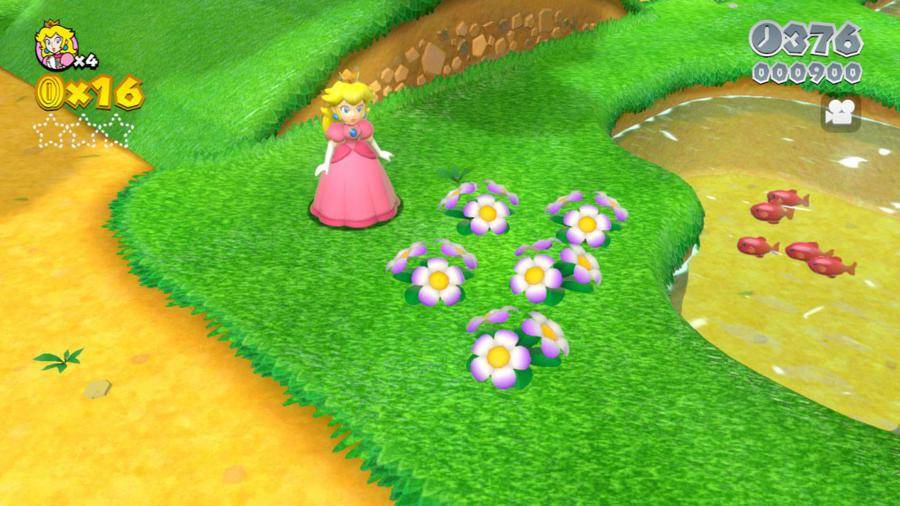 The level design is good as well, with enough puzzles, bonuses and extras to keep you coming back. There’s a lot to collect, including three green stars on each level and dozens of stamps to hunt out. Just getting through some of the levels without dying can be a challenge, so hardcore Mario fans can expect tens of hours of time needed to 100% absolutely everything. Casual fans, just with an eye to reaching the final boss, are probably looking at a little under 11 hours of game time.

Those looking for something more plot driven are in the wrong place. Mario continues to be a franchise driven less by words and more by the game itself, which may well be a good thing, depending what you’re into. There’s a cutscene at the beginning to show you what your ultimate goal should be – Bowser has trapped a set of a spanner-wielding faeries and you must save them by making your way to, and taking over, a number of castles in different worlds – and a movie at the end to reward you for finishing.

The momentum of Super Mario 3D World, outside of those cutscenes, is entirely down to you. Most of the levels are of just the right size and length that you’re never going to get bored, although there’s certainly a sense of fatigue in the second half of the game if you play it through quickly. Level types start repeating, puzzles start becoming a little too easy to solve.

There are five characters in total, one that’s a secret and will require some work to unlock. You’ll need to complete each level with every character to fully unlock everything on offer.

That’s an awful lot of repetition (unless you have three friends on standby to help out), but thankfully there’s a variety of ways to complete each level. New abilities make exploring exciting, and means each level can be played in a slightly different way. The cat ability is the headline act, and although it’s a little weird to see, it’s incredibly natural in-game and even addicitive. It really is fun to play as a cat, although Mario’s miao is slightly disconcerting. Tumblrites will love Peach.

Another worthwhile mention is the cherry which, although it doesn’t pop up very often, actually does shake up the gameplay a little. When you take a cherry, a clone of your character is formed next to him or her. You control the entire group, with more clones appearing with each cherry. Survive long enough, and you can reach previously inaccessible areas thanks to your little gang of doppelgängers.

There's a lot to collect, including three green stars on each level and dozens of stamps to hunt out

Aside from the slight repetition in the levels, there are a few other flaws that’ll show their face in extended play. There are very occasional glitches, which annoy whenever you come across them, and some levels can suddenly spike in difficulty. On the whole things are very easy, even the bosses, but there will be levels that leave you swearing. Not even always entire levels, either.

There’s also a few minor issues with co-op. With only one female character available from the beginning, a group of all girls is probably going to end up fighting to avoid playing as the heavy set Italian moustache man, and that seems like it could easily be a problem. Similarly, only the first player controls things on the level select map, with the other characters following. This could have been better if the “winner” of the last level, the person with the most points, took control, but no.

There are also some single player puzzle levels in which you control an explorer toad. These are easy to work out but take some time. It’s not really a fun experience, and it’ll likely go untouched by anyone playing in a group.

It would be unfair to say the Wii U isn’t the home of some decent titles, and Super Mario 3D World would be comfortable at the very top of that list. It’s an excellent game, with only a few small issues that might annoy those easily distracted, or with young children.

If you own a Wii U, buy Super Mario 3D World.