Like everyone, I looked at Disney Infinity when it was announced and saw only a money grabbing rip-off of Activision’s popular Skylanders series. ANOTHER game where I have to buy overpriced toys to unlock some on-disc DLC? Ridiculous.

But then they actually started showing the game and talking about their vision for it. The combining of Disney properties into this one catch-all game. The play sets that allowed you to go into the worlds of your favorite Disney characters and play through a unique set of missions and challenges. And of course the toy box mode, where you could take everything and mix it all together to create fantastic levels and entirely new game types for yourself and other people to enjoy.In the period between the initial reveal and the actual product release, Disney Infinity won me over. And it has continued to do so since I popped in the disc.

The very first thing you do in Disney Infinity is play through a little introduction sequence that introduces you to the idea of what the game is all about. It’s a beautifully constructed introduction that has you interacting with a wide variety of Disney characters and experiencing quick snippets of the various types of gameplay.

The Starter Set for Disney Infinity comes with three characters, Captain Jack Sparrow, Sully, and Mr. Incredible, along with their corresponding play sets. It’s best to think of a play set as a replacement for the crummy licensed game that would normally accompany a Disney movie release, with the exception of the fact that these are actually quite good! Each of the three drops you into an open world based on the film and sets you off on a series of quests. You’ll follow the critical path and branch off to explore or do side missions as you please, leveling up your characters and earning toys to use in the toy box mode. The Incredibles set turns you loose in Metroville after Syndrome has dropped in a number of robots bent on destruction. 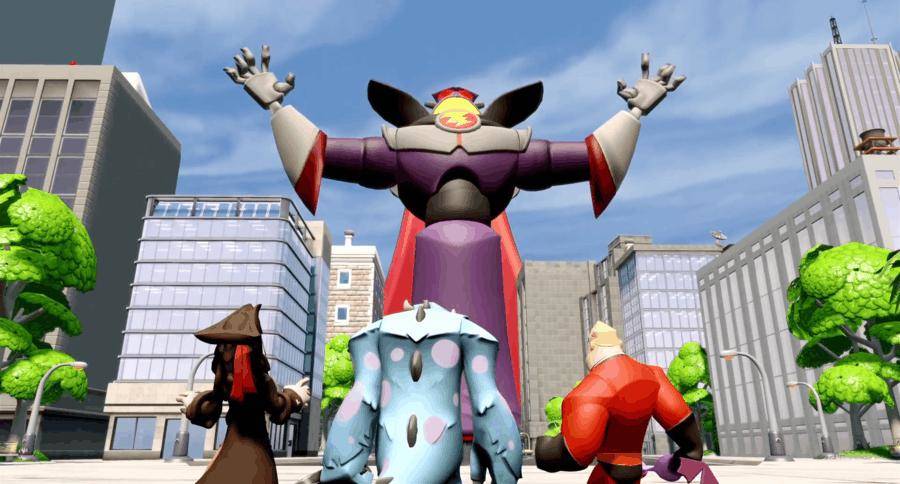 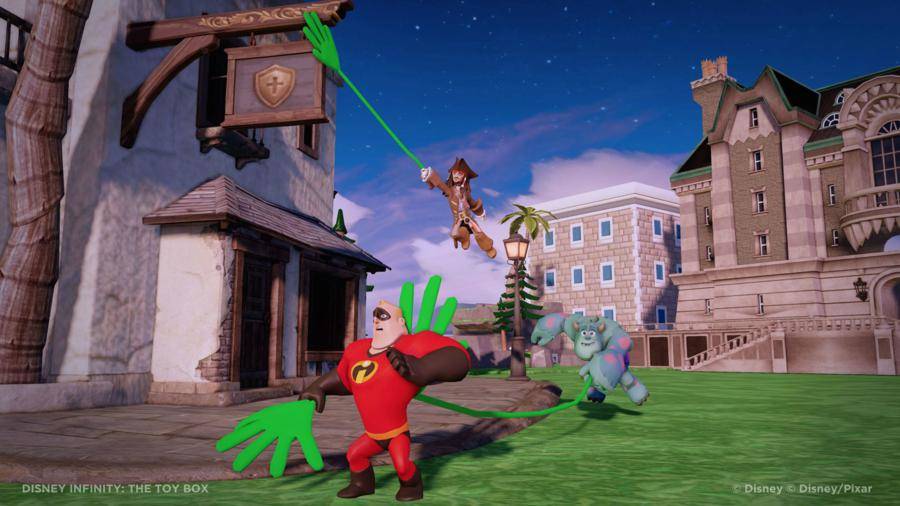 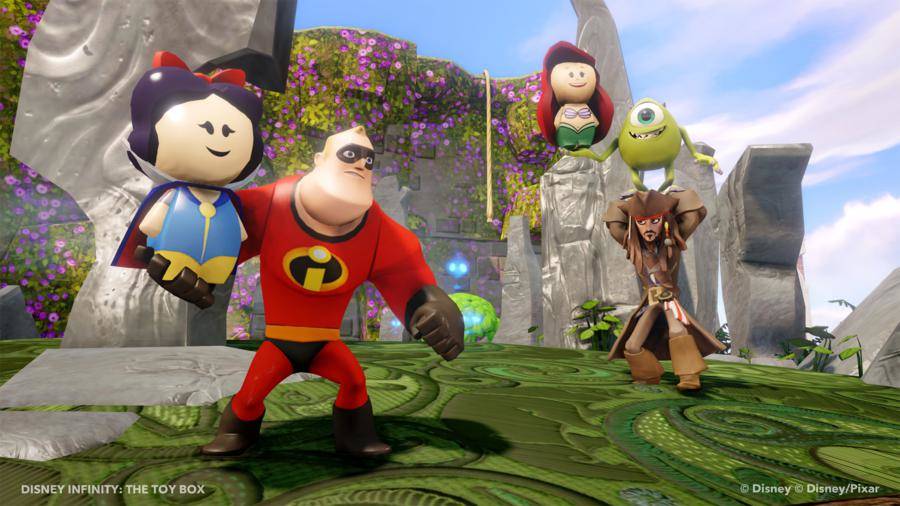 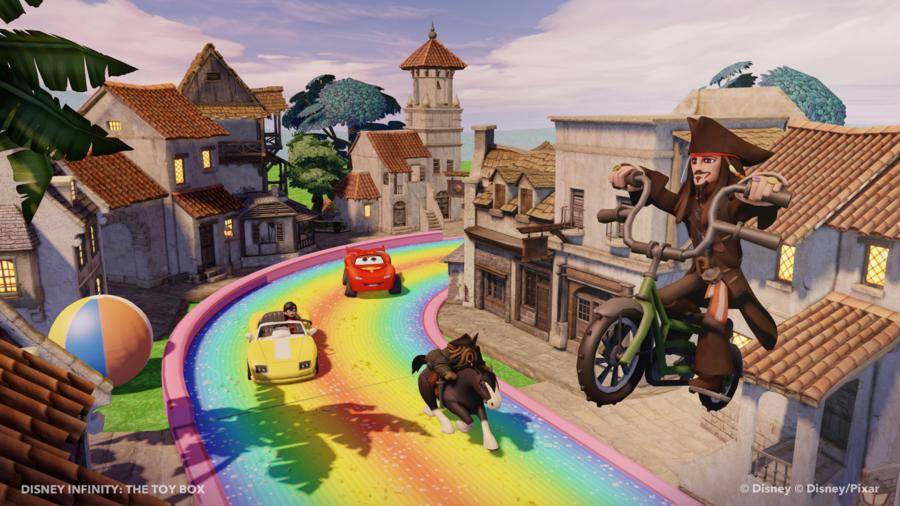 You can drive around the city, destroying the rampant machines while saving civilians and doing character specific challenges. Monsters University is essentially a stealth game in which you have to scare and prank your Fear Tech rivals to collect scare tokens and beat them at their own game. Pirates is probably the stand out addition, giving you a large area of the Caribbean to explore on your own pirate ship that you can upgrade and outfit however you choose. You’ll explore islands looking for treasure, cross swords with Davy Jones’ scurvy pirates, and engage in excellent naval battles. When playing with a second person, one of you can drive the ship and unleash broad side barrages, while the second  player can jump on an individual cannon and take out more specific targets. This brings us to one of the problems with the Starter kit. Because characters are not allowed to enter a play set of a franchise they don’t come from, you won’t be able to play with two players in any of the play sets straight out of the box. If you want that privilege, you’ll be buying some more figures.

It’s Your Place to Play

You will however be able to mix characters together in the creative Toy Box mode. This is the section that adds such longevity to the title. As you play the play sets and unlock more toys you can go into Toy Box mode and do whatever you want with them. Make a race track with insane loops and race Dash from the Incredibles against Lightning McQueen.

The sky is really the limit with the Toy Box mode. As long as you can dream it, you can probably make it

Build a soccer stadium and with a few simple triggers and you’ll have a working score board and a display of fireworks every time someone scores a goal. The sky is really the limit with the Toy Box mode. As long as you can dream it, you can probably make it, assuming you have unlocked the toys you need and some of the triggers required.

This is a bit of a problem with the Toy Box mode. Many things that you really want to use (like the aforementioned triggers and such) are locked in the Toy Vault. You’d think that this would be a simple system where you went in and purchased the items you want, but it’s more like a slot machine. You earn spins by leveling up your characters and finding tokens hidden around the various worlds, but it seems like you are going to have to invest a lot of time (and potentially purchase a number of characters) to earn all the spins you will need to unlock most of what the toy box has to offer.

We can’t talk about Disney Infinity without mentioning the actual toys that power the game. The first time I saw a Skylander, I was impressed with the quality of the toy for the price, especially considering it had a video game benefit. The individual characters for Disney Infinity are a bit more expensive than a regular Skylander, but they seem to be of slightly higher quality.

I was impressed when I first got my hands on them because of how large they are, many of them being closer to the size of a Skylanders Giant than a regular Skylander. They feel solid and look fantastic on display, and one could argue that they are slightly more appropriate for a grown man to own than a bunch of ugly little critters because everyone loves Disney. That’s what I’m telling myself, anyway. If you get really obsessed you can also collect the power discs, little plastic tiles that add different items or effects to the gameplay. They are sold in blind bags of two, so you can expect to get some extras, which Disney says is meant to encourage trading. If you have children at the right age, the trading aspect is likely to be very exciting for them.To make the collection aspect even more fun, there’s a place in the game called the Hall of Heroes that immortalizes in statue form every character you own, as well as putting tiles on the ground to represent the power discs you own. The statues change as you level up your characters, and the more you play the more impressive the actual Hall of Heroes becomes as well. It’s almost cool enough to make me want to buy characters that I otherwise wouldn’t care about, which I suppose is the point. God help my wallet.The toys are nice enough that when I don’t have the game running, my children like to take them and incorporate them into their play time with other toys. There are many people who are going to want to purchase these figures for display or just for their kids to enjoy even if they have no interest in the game at all, so expect Disney to make a fortune.

The Sum of the Parts

If you love Disney characters, action platformers, toy collecting, and building your own levels (or just screwing around in a free play sandbox) then Disney Infinity is a no brainer. This is no mere Skylanders clone. Where Skylanders is a Gauntlet-style action RPG, Disney Infinity is something like Ratchet and Clank meets Little Big Planet with Disney characters. It’s a true family game that everyone can play and have fun together, whether you are doing missions in the play sets or just messing around in Toy Box mode. Even when some of the play set missions got a bit repetitive, and even though the difficulty is clearly tailored for someone younger than I am, I didn’t spend one second playing with my kids and my wife that I wasn’t having pure fun. Isn’t that what gaming is all about?