Nintendo’s “Year of Luigi” is here, and what better way to celebrate then by giving the oft forgotten brother his own game that doesn’t involve catching ghosts? Well, New Super Luigi U is that game, currently available as a digital add-on for New Super Mario Bros. U, and set for a stand-alone retail release later this Summer. The result is a game that shines on its own in subtle and cagey ways.

Not Your Grandfather’s DLC

Indeed, this is more than a repackaging – this is Nintendo fine-tuning an already great product, throwing in a dash of nostalgia and offering up a full, meaty game at a discounted price. No, it’s not the extra hats, power-ups or a few bonus levels that a lot of DLC offers. Instead, it’s a complete redesign of all 82 stages found in NSMBU with Luigi in the starring role, plus a few other twists, including Nabbit as a playable character, and a big spike in difficulty.

Right out of the gate I could tell I was in for a bigger challenge than NSMBU, a game that was well-designed but lacking in the “where did that Bullet Bill come from?!” department. This wasn’t a bad thing per se, but this reimagining of the original should raise the eyebrows of the masochistic gamers that prefer the more punishing Mario titles of old.

The initial hurdle to cross is controlling Luigi, who has a tendency to be a little slippery when on the run, and awkward when jumping. It took me a few stages to get used to this, but I wound up enjoying this change. Luigi’s movements reflect his gangly stature and give him features that make him stand apart from his brother, as opposed to being merely a taller version with a green hat and shirt. The fact he can jump a lot higher and for longer distances than Mario gives him some much needed bragging rights, as well. 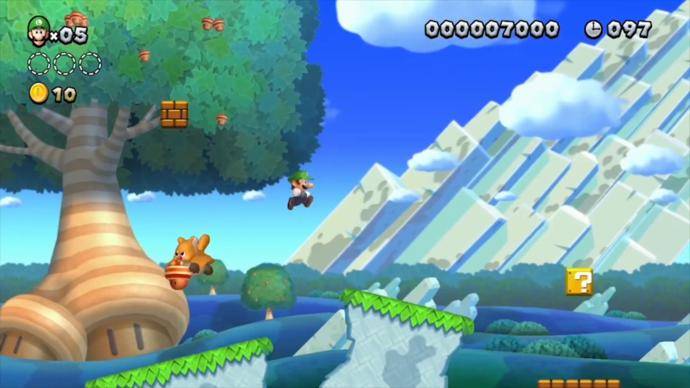 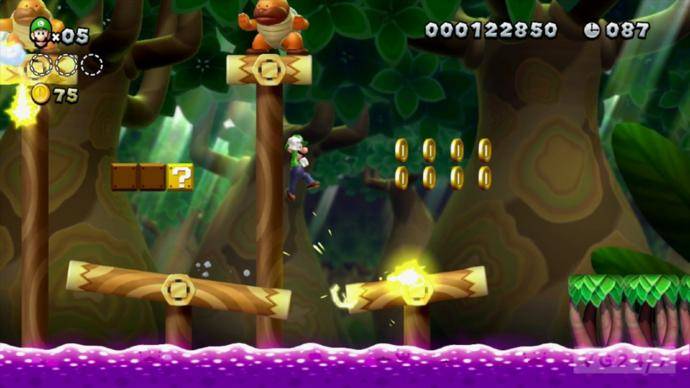 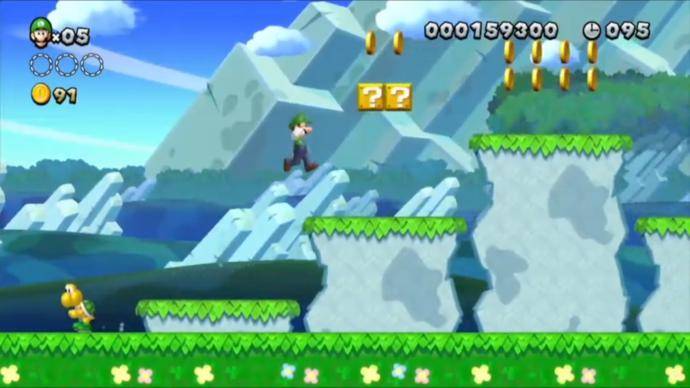 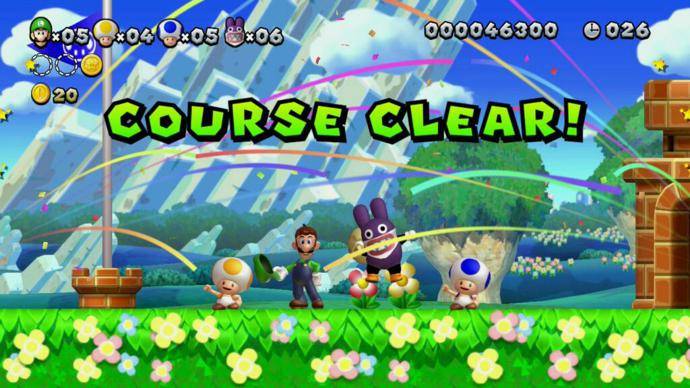 The “new” levels have been tailored to fit Luigi’s abilities. The basic framework for the original stages is still there, including the eye-popping HD visuals and catchy music, but they’ve been compressed and altered to accommodate Luigi as well as up the challenge. There are more enemies in some cases, harder enemies start popping up earlier, certain platforms have been removed and the timer has been dropped to 100 seconds, making speed a priority.

While keeping an eye on the clock is important, I found that in most circumstances it’s best to be patient (but not too patient). Running through the zone, jumping and sliding to net a quick victory typically leads to repeated deaths. However, Nintendo’s clever level design lends itself to educating the player rather quickly. Too many Thwomps falling from the ceiling? Pay attention to the layout of the platforms beneath them, and how they are perfectly suited for Luigi to sprint over them, dodging the Thwomps in the process.

If frustration starts to set in, and it will, Nintendo added a somewhat hidden option to make the single player less daunting. If a specific button is pressed on the world map, it’s possible to play through an entire stage as Nabbit, that funny purple creature in NSMBU that Mario would have to chase periodically. He’s pretty much invincible, thereby making progress much easier.

Nabbit’s secret single player existence (he’s visibly playable in multiplayer) indicates that Nintendo wants gamers to experience how hard the game is, and that using Nabbit should be a final option. It’s a nice touch, but not exactly necessary. Like I implied earlier, most of these stages are not as taxing as they initially appear.

One of the few other quibbles here is that the game can only be saved during the middle and end of a world. A quick-save can be done, but this can only be reloaded once. I found this to be a little bit of a downer when I came upon a bothersome level and I wanted to take a break to regroup.

The boss battles could have used some retouching, as well. Like most Mario games, fighting Bowser’s henchturtles is still the tried and true, predictable pattern, three-hit encounter. After finishing a series of fun, hectic levels, it’s disappointing that these bosses are still pushovers. The only upside is that the ease of getting past them means accessing more of these superb stages quicker.

NSLU may have the appearance of a reskin, but it’s truly not. The little changes that have been made have lead to a deeper, more polished experience that plays like a love letter to the 8-bit era. It’s a rewarding experience that’s evidence Nintendo hasn’t lost their masterful ability to create some of the best platformers around.