It wouldn’t be a Nintendo console launch without SOMETHING for the Mario fans to play. The Wii U has New Super Mario Bros U, and like everything in the New Super Mario Bros series, it’s a fun jaunt through the Mushroom Kingdom, with the potential to play with friends and take out Bowser as a team.

It’s funny that one of the first phrases that came to mind when I began this review was “like everything in the New Super Mario Bros series,” because that’s actually a great header for the entire piece. This is a great game, but it’s a game we’ve all played before.

Peach has been kidnapped, and the world in which plumbers regularly visit royalty (presumably to clean out the pipes) is once again threatened by a team made up of the prehistoric equivalent of the family from Shameless. Mario and Luigi… to the rescue. 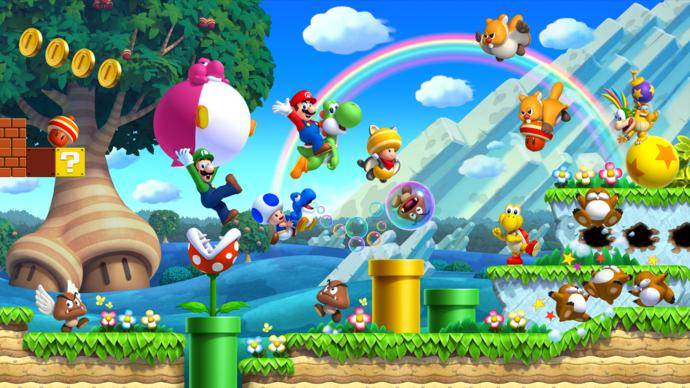 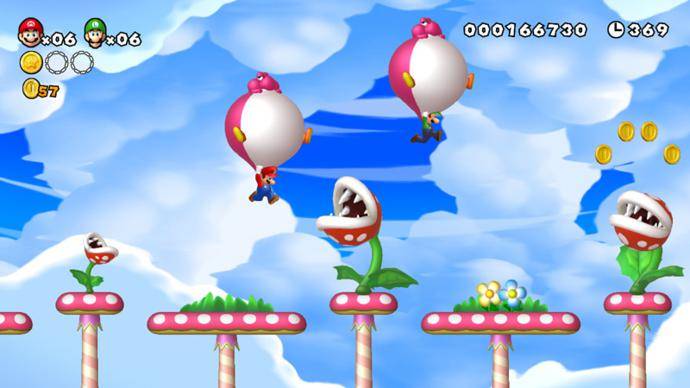 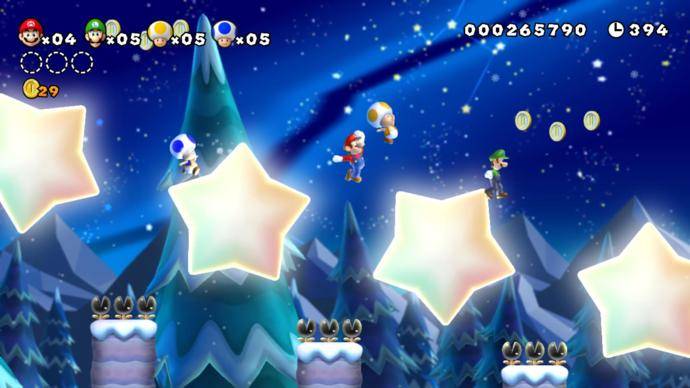 As with all the 2D Mario platformers, you’ll generally hop, skip and jump from the left side of the screen to the right, dodging pits and enemies along the way. After nearly 30 years of Mario platformers, it only stands to reason that the level design is pretty much flawless, and that’s true. There’s no point where you’ll feel you’ve died unfairly, although things can get pretty difficult towards the end.

Having other players around takes away the risk of a single death ruining an otherwise perfect run, but adds other problems. If you both jump at the same time, there’s a good chance you’re going to crash into one another and that one of you is going to end up dead. You can quickly put your character in a bubble to protect them from dangers, although it’s more likely that the sudden surprise of becoming a jumping board for your friend will instead inspire you to do little more than push said friend off the couch.

Playing alone or with other players remains far more fun than it should be after all these years, but there you are. They’ve managed to build a formula that is all too familiar, but that works. I started to feel a little fatigued whenever I reached a level I couldn’t easily complete, as if I’d got through the more frustrating stuff a million times before.

And that’s really the crux of whether you’ll enjoy this game or not. It’s inarguably a good game, but how patient you are with another New Super Mario Bros. game is what will make the difference between this being a must-play and a “when you’re ready” title.

New Super Mario Bros. U is the perfect example of HD not necessarily meaning absolutely stunning. For while New Super Mario Bros U is easily the best looking 2D Mario game I’ve ever played, it’s still recognizably Mario. The art style, which has always looked great, doesn’t necessarily look any better just because the colours pop a little more. For that reason, it’s hard to imagine a Mario game that looks any better than this.

The audio, similarly, is so steeped in the history of the franchise that it’s all pretty much reused materiel. It’s perhaps slightly better than previous games, but not so much that the average player is going to notice the difference.

Like the gameplay, things have perhaps been improved upon for the audial and visual presentation of New Super Mario Bros U. But for every change, there are too many similarities.

It’s hard to criticize Super Mario Bros. U for being what is the quintessential platforming experience. If it is too similar to its predecessors, that’s only because there’s little you can change within the Mario recipe without running the risk of changing the flavour completely. Hardcore gamers, people who have picked up ever title since ’83, are unlikely to be impressed and are largely the people who want everything to change. I suspect those who buy to play with friends and family once in a while feel less inclined towards other experiences, and they are the people for whom Super Mario Bros. U will really shine.