Ratchet and Clank Into the Nexus Review

Ratchet and Clank Into the Nexus

Ratchet and Clank Into the Nexus Review – Introduction

After a poor showing over the last couple of games, Ratchet and Clank Into the Nexus attempts to revisit the series’ core mechanics and return it to its former glory. Series creator Insomniac mostly succeeds, crafting a short but focused adventure that satisfyingly wraps up the Future sub-series. The game rarely, if ever, breaks new ground. But despite this fact, a funny script, engaging characters, sound gameplay, and luscious art design all make this six hour adventure a great addition to this long running franchise.

Into the Nexus is first and foremost a classic Ratchet and Clank game. As mentioned earlier, it was purposefully created to resemble past core titles in the series, especially after both 2011’s All 4 One and last year’s Full Frontal Assault getting mixed reviews. The regular 3rd-person camera angle makes its return here, and so does a variety of exotic weapons Ratchet has at his disposal. While the weapon count this time around is possibly the smallest out of all of the main PS3 games, with barely a dozen, they’re all still pleasant to use. Most of the weapons are recycled from past titles, which is a letdown, but a few new ones do stand out. The Terrorizer, which fires fake ‘Ghouls’ (or monsters), is specifically designed to scare enemies. It doesn’t inflict much, if any, damage but it’s always entertaining to see your enemies’ reaction.

Another stand out weapon is the Blizz-O-Matic, which freezes your enemies and turns them into Snowmen. But the real draw is the Christmas jingle that plays while you use it. It doesn’t change the gameplay much, but it does provide for a creative aesthetic. The ways in which you use these weapons is your typical Ratchet and Clank fare. The game is a competent third-person shooter with a shallow weapon progression system. You can power up your arsenal by simply using each of your weapons as well as upgrade them in subtle ways using collectable raritanium. It isn’t anything fascinating, as most of the upgrades just mainly focus on extra ammo or fire rate/power, so it’s a bit of a disappointment because Insomniac had ample room here to make the core gameplay mechanics a bit more fungible. Instead of opting to turn a Ratchet and Clank game into a co-op only experience or a poor tower-defense simulator, as in both All 4 One and Full Frontal Assault, adding more flare and substance to these upgrades would’ve been more than enough to differentiate the series’ decade old roots.

Throughout the journey, you’ll do some platforming but primarily focus on eradicating your enemies using your weaponry. The controls are tight and it’s generally good fun, but there were times where the combat felt superfluous, simply put there to add longevity to the short experience. There’s also the addition of both the Grav Tether and a Jetpack. The former is a gadget Ratchet uses to help him maneuver around Grav Portals that need to be created to progress through certain environments. The game doesn’t ask much from the player in regards to creating these Portals, but it occasionally provides short platforming puzzles that are enjoyable to engage with. 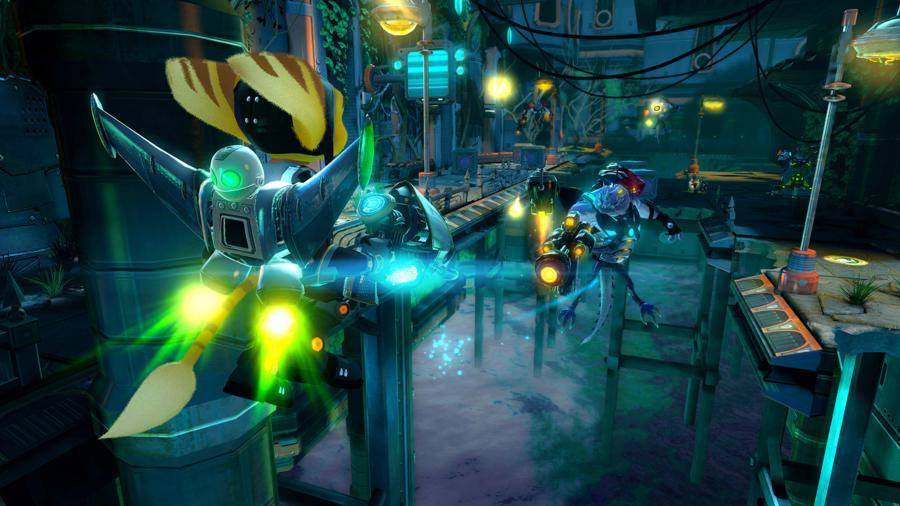 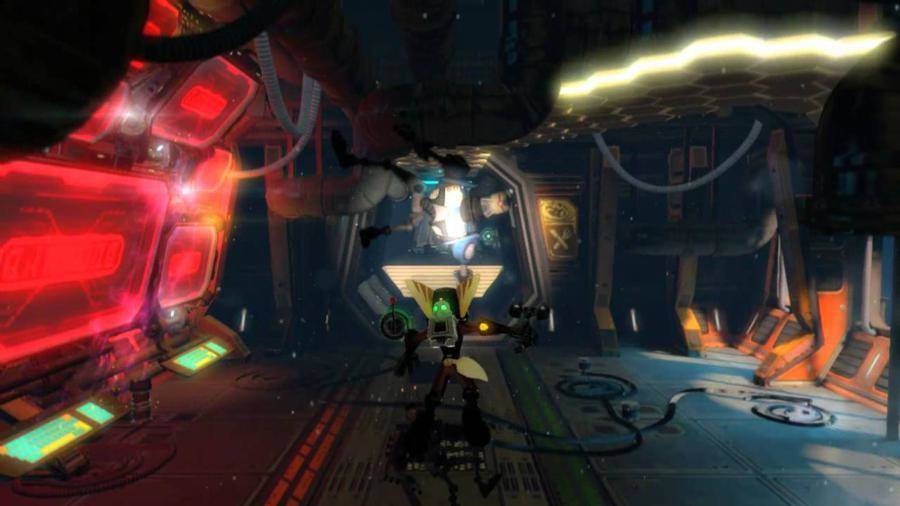 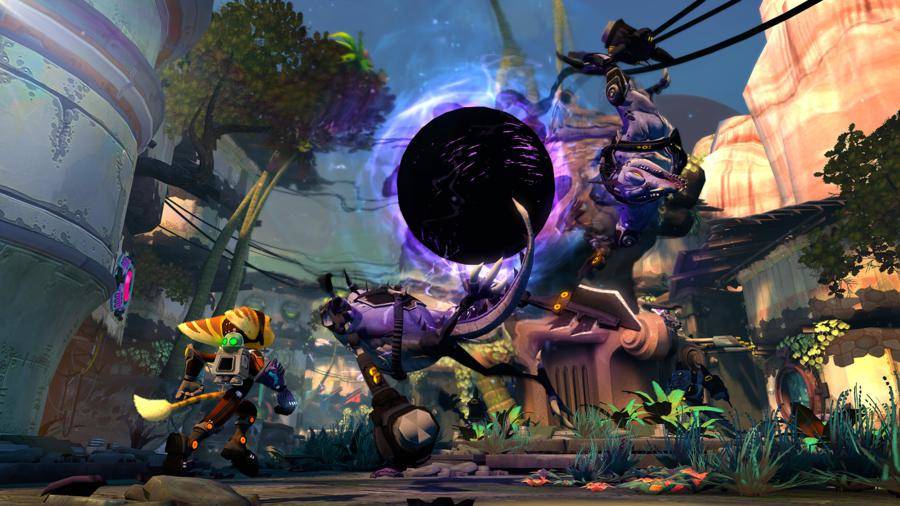 There are two specific segments in the game that solely focus on the new Jetpack, which Clank takes the form of. Ratchet mostly uses the Jetpack to maneuver around the environment in a new way in both these segments, and combat enemies in the air. It was a great little add-on that complemented the game very well. Clank also has his own short sections a couple of times, reminiscing the time puzzles in A Crack in Time. These ‘Netherverse’ segments focus on platforming puzzles, but they ultimately felt a bit too dull, and pale in comparison to the sequences found in A Crack in Time.

Time to Save the World….Again

The main narrative here retreads common grounds for heroes Ratchet and Clank, as they have to save the world from maniacal villains once again. But the story had enough twists and funny writing to feel fresh, and even thought provoking at times. Into the Nexus even has, quite possibly, the darkest opening sequence out of the whole series. There’s a sense of bravado here from Insomniac, as they masterfully showcase their ability to tell a story that successfully plays out at as a temporary swan song for this series. Into the Nexus is one of the more well most paced Ratchet and Clank adventures, and the overlying theme found here exudes levels of maturity that I haven’t seen from these types of games in a long while.

Main villains, (and twins), Vendra and Neftin Prog‘s sole motivation is to reunite with their race. Growing up feeling excluded from the rest of the world and painfully bullied, their desire to feel welcomed and loved is an understandable goal and resonates with the overarching narrative in the Future sub-series. The Prog twins go to extreme lengths to diminish their alienation and heroes Ratchet and Clank are at the forefront in their unbridled desire. The most interesting parts of the narrative are the ones that deal with Ratchet’s same situation as the Progs. The loan Lombax has been attempting to discover his race since the very beginning, and with having come close in A Crack in Time the stigma of Ratchet’s choice at the end of that game clearly plagues his mind.

Both Ratchet and Clank are no neophytes here, and their experience surrounding the current situation, and especially the persistent Lombax problem, make Into the Nexus feel like a satisfying last outing. It’s also bitingly funny, with the series’ persistent nature to sarcastically mock societal tropes making a return here. However, fan favorite Captain Quirk feels underused and seems to only be included to satisfy fans’ need for his presence. The art design in the game feels extravagant and complements Into the Nexus’ unique aesthetic feel and narrative. They feel directly influenced by the pulchritudinous villain models found in the game, especially the Prog twins. The settings also feeds directly off of the story and both feel great in unison.

Into the Nexus is a short, but refined Ratchet and Clank experience that’s priced accordingly at $29.99 and expertly ties a bow on the PS3 Future sub-series. The combat is well crafted, albeit unsurprising, that has moments of dopamine filled extravagance with its particular library of weapons. With the series’ considerable absence of form over the past few titles, both Insomniac and Sony were desperate to churn out one last title to help fill the void of relevance. Into the Nexus also shows Insomniac’s ability to write a script that both spews considerable comedic quality and mature thematic elements. If the series were to make an appearance on the PS4, Into the Nexus left me with a feeling of impatience to return to the wonderful world Insomniac created in a much more grandiose fashion.