The Smurfs probably shouldn’t be the stars of one of the most traditional movie tie-ins I’ve seen in recent years, but they are. A platform game, made up of features from other, more successful platform games, with famous characters smacked into the lead spot just because. It’s a little slice of all of our childhoods – it stunk then, and it stinks now.

It didn’t matter though. We didn’t want excellent quality from our tie-ins twenty years ago, and The Smurfs 2 manages to still be a fun, if slow experience that will no doubt delight its target audience.

The Smurfs 2 is a platformer that takes you through various locations within the Smurfs universe, following the plot of the latest film. Gargamel has kidnapped Smurfette, and you’ll run and jump your way through forests as you try to rescue her. She is the only girl, after all.

The story is told through a series of storybook-like still images. It’s a nice way of delivering the plot, although it doesn’t happen between every level and isn’t really enough to hide the repetitive nature of the gameplay.

Running and jumping is more or less the only thing that you’ll do while playing The Smurfs 2. There are enemies, of course, and you’ll jump on their heads to get rid of them, but even that is basically optional. There are more than a few levels where you can walk in a straight line and avoid more or less everything, only coming across a few enemies or gaps to distract your from your path. 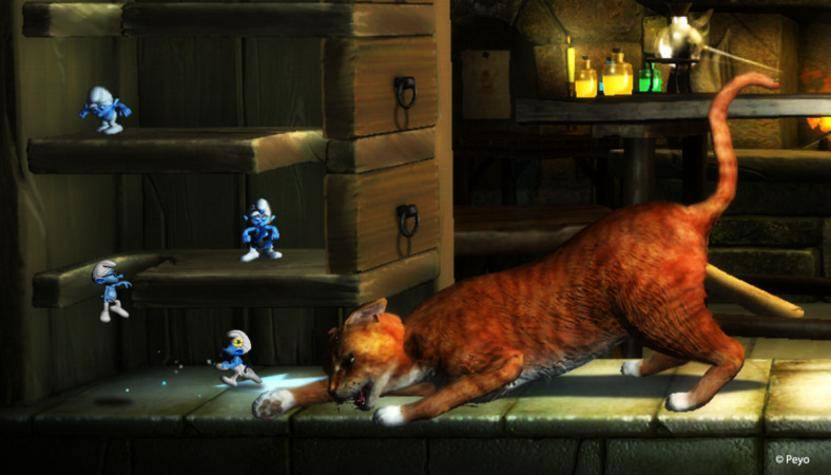 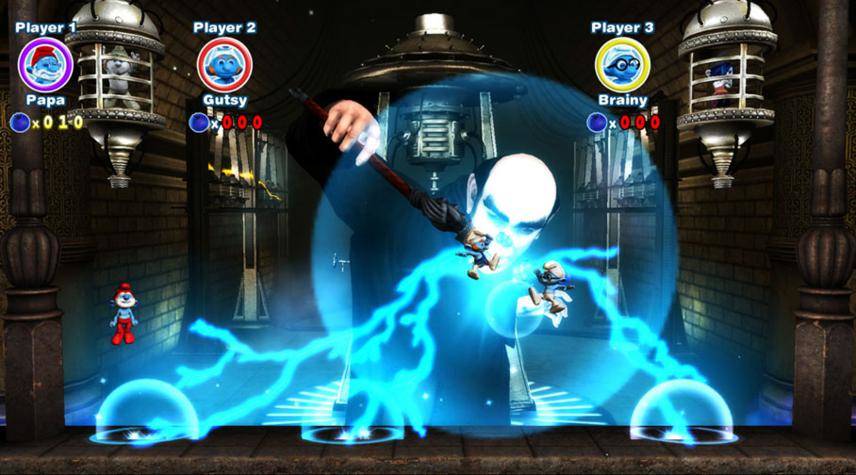 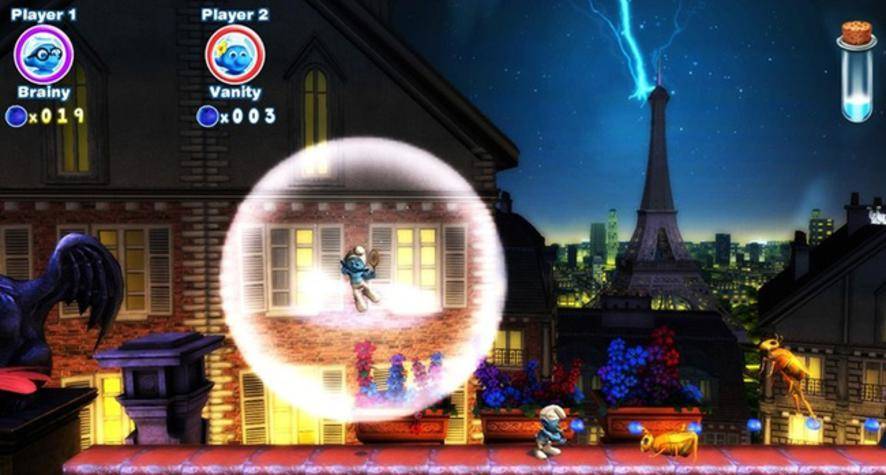 If you choose to take a more action-packed route, you’ll be able to collect all the Smurf berries your little Smurf stomach can handle. They’re a bit like rings in Sonic, except you don’t get a life at 100 (because there aren’t any lives). You collect them so that you don’t die, and to fulfil challenges.

Each level has three challenges, and aside from having something else to focus on in the journey towards 100%, there’s not much you can do with them. They usually involve playing with a certain character, using a certain skill, collecting a certain amount of Smurf berries or entering true blue mode a certain number of times.

True blue mode occurs when you’ve killed (“freed”) a certain amount of enemies. They drop a small vial of liquid – which I’ve chosen to believe is Smurf steroids – and when you’ve collected a certain amount, the value of Smurf berries double and that song begins to play. Loudly. On repeat. Until true blue is over. I can hear it now.

There are a number of Smurfs to choose from, each with their own unique skills. Papa Smurf throws potions which freezes enemies, Brainy can jump extra high (because of his logic, apparently), Gutsy can punch through things and Jokey throws presents. There are quite a few different Smurfs to unlock, and the entire game is playable with friends/siblings in co-op.

(That’s an actual line from the game).

Although the basic gameplay is more than passable for a kid’s game, it is with the level design that things begin to fall apart. The Smurfs 2 is incredibly simplistic. As above, the entire goal of each level tends to be walk slowly to the right.

There are a few levels that shake things up, but not enough. They tend to be boss levels – where you wait for the perfect moment, dodging attacks and jumping on an enemies head – or levels where you walk slowly in a different level.

That would be fine, ordinarily. You don’t expect something like this to reinvent a genre. No, instead, the problem comes from just how slowly everything works. Enemies are easily dodged and killed. Your walk speed is depressing. They could have doubled or tripled it, and the target demographic still wouldn’t have any problem mastering everything on offer very, very quickly.

The entire game can be finished in a single three or four hour session, so those of you that let your kids play games heavily may want to look elsewhere for value.

If you manage to get through to the end, there are a few reasons to head back through. Firstly, trophies. They come thick and fast, and you’ll have the platinum in only a few sittings. If you’re a trophy hunter, this is definitely one to look at.

The entire game can be finished in a single three or four hour session, so those of you that let your kids play games heavily may want to look elsewhere for value

For more child-like players, you’ll be desperate to collect the large gold coins. Each level has at least three, and they’re all hidden away. You won’t be able to play them on your first playthrough though. Sometimes you’ll need to us a specific Smurf’s powers to grab one, and other times they’ll be hidden behind a barrier that only disappears when you’ve beaten a boss.

In other words, it’s quite a cheap way of forcing you not to collect anything on your first journey through.

There are over 100 coins to grab, so finding the best combination of characters to levels will take most people quite a while.

I can’t tell what it Smurf

While the audio and voice acting is good enough to get you through to the end of the game, the repetition of the lines is super annoying. Each character has only a handful of spoken words, which they repeat endlessly. This is more pronounced, because you will end up pretty much defaulting to a certain character.

Which will probably look terrible. Instead of choosing to go with the original animation style, or with something more reminiscent of the films, the developers have chosen a semi-polygonal style that looks like something from a PS1 game. I know that’s a said thing, and it tends to be an exaggeration, but there’s a polar bear later in the game that might have come out of Crash Bandicoot.

At Last: The Smurfing Smurfs are at an End

The Smurfs 2 is a fun but ultimately flawed kid’s title that feels retro enough to appeal to parents and Smurfy enough to appeal to kids. Children that are actually into games will find Rayman or Mario offer better overall experiences (and value for money as well), but as a tie-in, it’s hard to knock the overall effect.

This is one to play together, especially now that summer is here.