Having originally been announced in October of 2011, Guacamelee! left countless gamers and critics impressed. Having claimed a number of prestigious awards such as “Best of PAX 2012”, as well as being an ‘Independent Games Festival’ finalist, Guacamelee! has completely captured my heart with its clever humour, gorgeous visuals and its truly remarkable platforming. Its Mexican folklore inspired universe is truly a sight for sore eyes and the exceptionally written dialogue will have you rolling off whatever surface you choose to sit on.

The game starts by putting you into the shoes of failed Luchador, Juan. While celebrating the “Day of the Dead”, a Mexican holiday where people honour the deceased, things go awry when an army of skeleton soldiers attack. Carlos Calaca, the main antagonist of the game, kidnaps “El Presidente’s” daughter. He plans to sacrifice her and merge the world of the living with the world of the dead once and for all. Ultimately, his goal is to become the all-powerful god of this newly formed world. 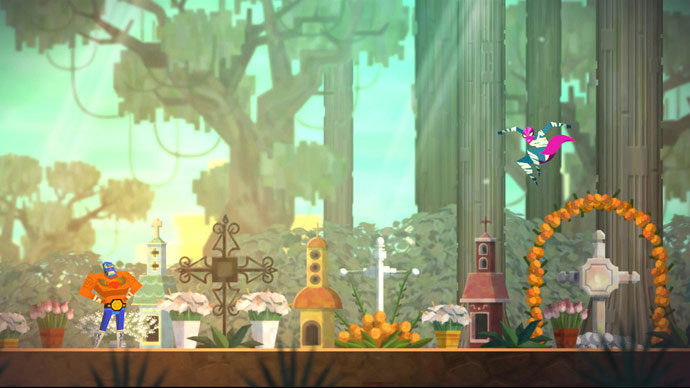 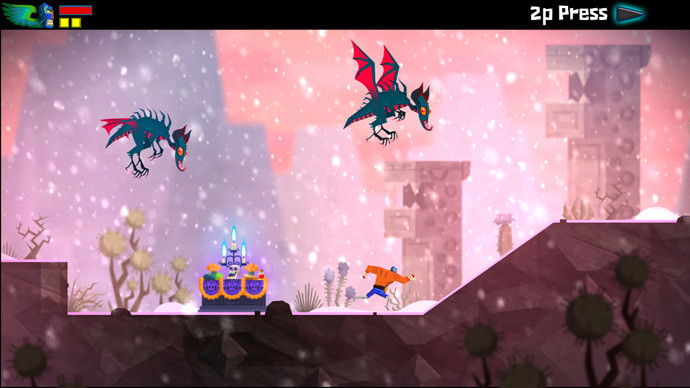 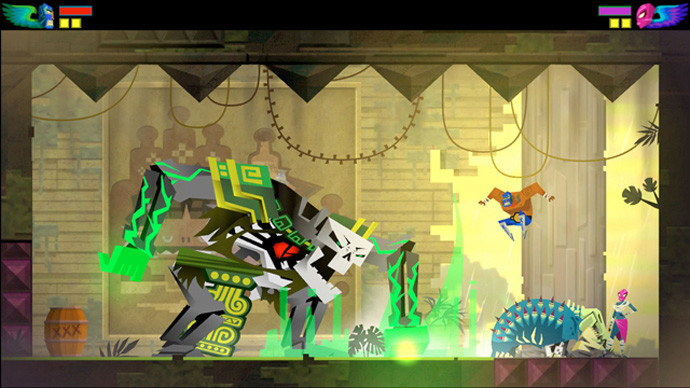 Juan won’t let this pass though and takes it upon himself to rescue El Presidente’s daughter and restore balance to both worlds. Having been bestowed with a special Luchador mask, Juan will have to punch, slam and pile drive his way through countless hard-headed enemies, traverse dangerous environments and fully beef up his skills if he is to face the Mexican menace that is Carlos Calaca.

To say that Guacamelee’s combat is refreshing would be an understatement. In this modern day and age where generic shooters and uninspired games have taken their toll, Guacamelee! stands tall, crushing its opposition. The game always manages to keep the “Metroidvania” type combat fresh with its brilliant pacing and the constant addition of new elements and mechanics.

Every area you explore will usually add a new move to Juan’s repertoire. These moves range from slam attacks to fiery uppercuts. By unlocking these special moves, Juan is able to perform outrageous combos that truly showcase the frantic combat of the game. Aside the fact that enemies will go down faster than you can say ‘El Pollo Loco’, these special abilities factor into the platforming of the game, granting you access to previously concealed locations.

Speaking of platforming, Guacamelee! is the perfect example of a game that has fused platforming elements with the combat mechanics perfectly. By ingeniously incorporating special combat abilities with the environment, Guacamelee doesn’t only make puzzles fun to solve, but also promotes exploration and discovery.

The dimension-switching mechanic (obtained a little way down the road) that allows you to alternate between the ‘World of the living’ and the ‘World of the dead’ is only a button away from letting you experience both sides of the coin. Each dimension hosts different architecture styles with an opposite colour palette. Besides the fact that both worlds look incredible, this ability factors into a lot of puzzle solving and places a unique twist on combat. (you can look forward to pushing the R2 button on a regular basis).

New enemy types are introduced regularly, preventing the combat from going stale. By the end of the game, enemies will have coloured shields with a special attack (of the same colour) required to break it. Enemies can also appear on either dimension. White silhouettes mean that Juan has to switch dimensions and continue his bloody battles over there. Beware though, as enemies will still be able to attack Juan regardless of their interdimensional placement.

Boss battles are another pillar that the game proudly stands on. Each and every character has their own unique, quirky personality which becomes clear through well written dialogue leading up to the fight. At some point I just couldn’t help myself from hysterically laughing for the better part of ten minutes due to a truckload of sexual innuendos. The mechanics are implemented perfectly and although you can secure a victory by learning boss attack patterns, the battles themselves are really something to praise.

Furthermore, having tried the local co-op feature, I can confidently say that bashing up skeletons has never felt better. My best friend and I seamlessly went through the first half of the game without having realized how much time had passed and how much fun we actually had. We were helping each other out with puzzle rooms and in combat but even roaming around the main town and checking out all the easter eggs was truly awesome.

The visuals of Guacamelee! are truly wondrous. I would come to a sudden halt in every area and tell myself how amazing the design, detail and use of colours was. Switching between dimensions also portrays that same environment differently, with its own creepier, darker take. Filled up to the brim with amazing easter eggs and references, Drinkbox Studios have created an awesome Mexican themed world that is sure to leave players wanting more.

Apart from the first hour or so, the soundtrack fails to impress. At the start of the game, it feels like the cheerful classic Mexican music you would expect, and it’s just that. No more, no less. I feel as if Drinkbox Studios could have applied themselves a little better in the voice and sound department. However, this minor detraction from the overall experience is not likely to affect players significantly, and is just something Drinkbox could have possibly furthered.

Guacamelee! is the newest PlayStation exclusive to feature the trifecta; Cross-Save, Cross-Play and Cross-Buy. For the very affordable price of 15$ you receive a copy for your PS3 and PS Vita. The cross-save feature works flawlessly, you just go to Options -> Cloud storage and then choose to either download or upload from the cloud. The integration is seamless and this is what other cross-program games should aspire towards.

In addition, the cross-play feature came in handy (as I do not own a second PS3 controller). The game runs as beautifully as its counterpart and the Vita version just substitutes a few button presses with touch swipes. All in all, if you’re searching for a great game on the go, look no further.

In total, everything works incredibly well. Drinkbox studios have done a great job releasing a fully polished game that distinctly shows how much love and affection was put into it. Although it can be considered quite short, size does not matter in this case, as the awe-inspiring easter eggs and brilliant mechanics are sure to please and impress anyone in the gaming community.

As a Guacamelee! fan and a Drinkbox admirer, I can’t wait to feast my eyes on the next great title from such an exceptional developer.