Max Payne 3 marks the third entry in the gritty action series, and the first to be developed by Rockstar Games. The previous iterations were created by Finnish studio Remedy Entertainment, who then sold the rights to the series in 2002 to Take-Two. Now, a decade later, Max makes his debut on current-gen platforms; how has the grizzled old cop handled the move?

The story has always been a high point for the Max Payne series, and the third game is no exception. 14 years after the death of his family, Max is drifting listlessly and drinking himself into an early grave, until he runs into an old police academy acquaintance named Raoul Passos. Passos persuades Max to move to Sāo Paulo, Brazil, to work as private security for the wealthy Branco family. What follows is a tale of murder, deception and deceit, as Max delves into the seedy undercurrents & backstreets of the town to uncover some shocking revelations bubbling beneath the surface. São Paulo has always been a city of gaping disparity, and the story serves as a brutal portrayal of the gang-ridden favelas and the corruption-riddled apartments of the rich – and the violence and blood that tie them together. Expertly penned by Rockstar’s VP Dan Houser, the game will keep you guessing right up until the last moment, and the cleverly constructed non-linear story is a refreshing experience. It’s highly reminiscent of old film noir and hard boiled detective movies, and the game does a fantastic job of bringing the essence of those genres into the 21st century. 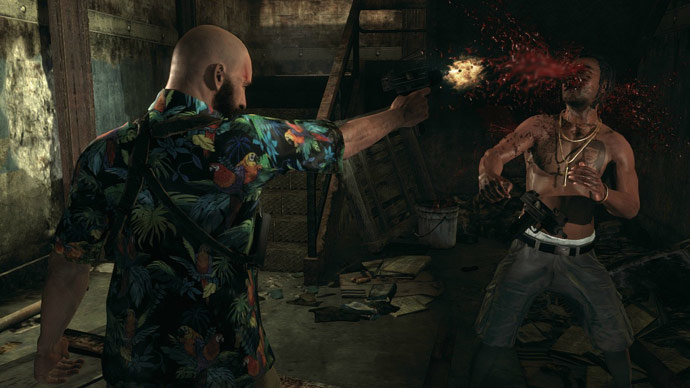 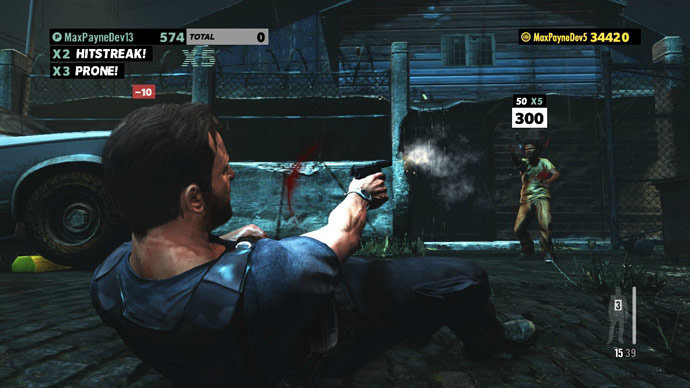 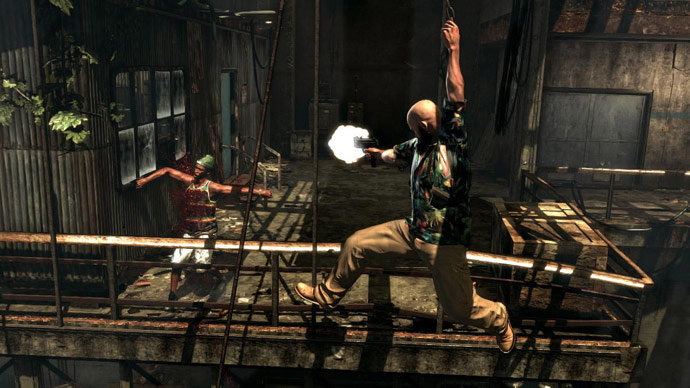 Throughout the title, Max provides an often funny and always interesting commentary, with his signature cynicism and indifference to the often horrendous circumstances he finds himself in well intact. Something that may deter the more casual audience is that the story can get fairly convoluted and difficult to follow – not so much when played through in a short space of time, though I can imagine those returning to the game after an extended period would be clueless as to where they’re going and why.

Controlling Max throughout the multitude of gunfights and combat arenas is never a chore, and the controls and overall feel are great. Aiming and firing both feel natural and smooth, and the cover system is sensible and reliable. The series’ signature Bullet Time is back, too, and allows players to perform some truly cinematic takedowns; diving across a room and activating bullet time, shooting all the enemies one by one, then returning to normal speed and watching them all drop to the floor at once is something that never gets old. There is also a feature new to the series implemented in this iteration called ‘Last Stand’ – essentially, if your health reaches zero and you have painkillers (the game’s health packs) available, if you can shoot & kill the assailant who delivered the would-be fatal shot then you will automatically regain health (using some painkillers) and be able to continue. On the whole, the system works well – though several times I found that the camera got into such an awkward angle that I had no hope of shooting (or even seeing, for that matter) the enemy I was supposed to kill, so I just had to watch Max slump to the floor and reload the save. These occasional irritations, however, do not detract significantly from the otherwise stellar gameplay experience, and the game notches the difficulty up enough to keep combat interesting throughout.

In terms of replay-ability, there are collectibles in the form of golden gun parts scattered throughout levels, as well as a collection of ‘grinds‘ (such as 250 groin shots) which, when completed, contribute to the leveling system. There is also an Arcade mode, and another mode titled ‘New York Minute‘ – essentially a kind of time attack which rewards players with extra time for kills. All in all, there’s a lot to experience here, and the game rewards your investment with a lot of extra material for devoted players.

While most will have bought the game for its single player mode, the new-to-the-series multiplayer is not to be missed; it works really well and feels like a tried & tested addition rather than an ugly shoe-in. There are a lot of smart innovations, such as dynamically balancing teams during games to create a more closely-matched fight, and bullet time has been cleverly integrated into multiplayer matches by only affecting those in the player’s line of sight – thus keeping the match outside of these mini combat arenas flowing normally. Another addition deserving of a mention is the Vendetta system – essentially, it keeps track of how many times a rival player has killed you and vice versa. I found myself obsessively hunting down a particular player to even the score between us, and it serves as a great way to keep matches interesting. Though Max Payne 3 probably won’t trouble Call of Duty on the player numbers boards, after all the effort and clever design that has gone into its multiplayer mode, perhaps it deserves to.

The graphics, and particularly the animations, are absolutely stunning. I’m not sure what kind of witchcraft Rockstar worked on this one, but it comes off as looking like one of the most stylish and polished shooters around. Max moves fluidly and dynamically reacts to objects and events around him; diving around objects and moving realistically into cover. In a title such as this, with so much importance placed on style and aesthetic, the game’s locations need to blow players away – and they do just that. From grimy New Jersey streets to sunny Brazilian islands and cramped favelas, all the environments feel authentic and accurate, and this careful attention to detail really shows.

Music for the game was composed primarily by the band Health, and they have done a brilliant job. Pounding and unsettling when it needs to be, light and melancholic at other times, the soundtrack provides a very fitting companion to the narrative, and is one of the most memorable of recent times. As for the voice acting, James McCaffrey returns in the role of grizzled ex-cop Payne, and his gravelly tones truly bring the excellent script to life. Generally, the audio is yet again another area in which Rockstar have left nothing to chance, and it is as polished and honed as the rest of the production.

Max Payne 3 stands as one of Rockstar’s greatest achievements, breathing new life into a series many thought forgotten. Unafraid to tinker with the beloved franchise, Rockstar have put their own stamp on Max Payne and it is all the better for it. Fans of films such as 2011’s neo-noir Drive will love the stylish & moody presentation, and the brilliant narrative is one of the most engaging and driven stories ever featured in a video game. Rockstar does very little wrong with Max Payne 3, and rarely will you find a game so confident, polished, and just downright awesome.