Catherine is an unusual game, to say the least. Whilst the bulk of it plays out either as a movie or as a watered-down RPG, the “main” gameplay is that of a block-pushing puzzle game that charges you with reaching the top of a tower whilst taking on various obstacles and difficulties. Mixed with a mature story and plenty of anime-style side boob, it’s hard to really pin down the sort of person that would really love Catherine. It’s totally unique, sometimes cheesy and well worth a look.

Vincent is in a committed, if slightly dull relationship. His beau, Katherine, is a hard-nosed if loving rock, but the idea of marrying her and settling down is far too much for Vincent, who just wants to carry on with the status quo. Over the space of a week, his life will be ripped apart.

The game takes place over the space of a week, as Vincent finds it more and more difficult to hide his indiscretion from his lovers, and as he works out exactly why he keeps inviting Catherine back into his life. 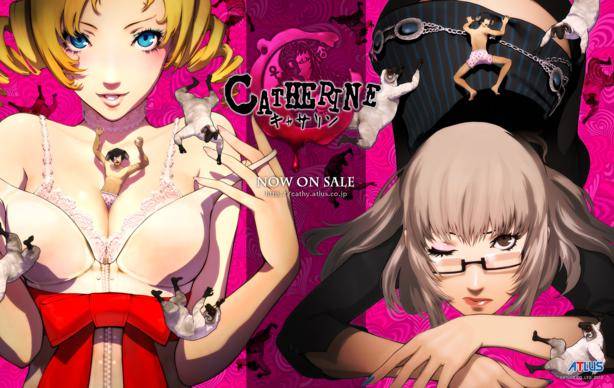 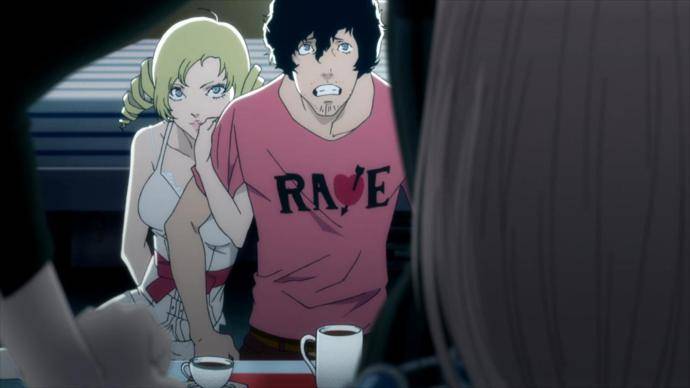 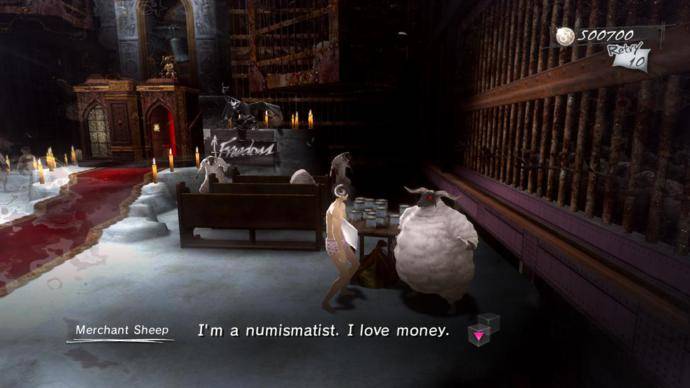 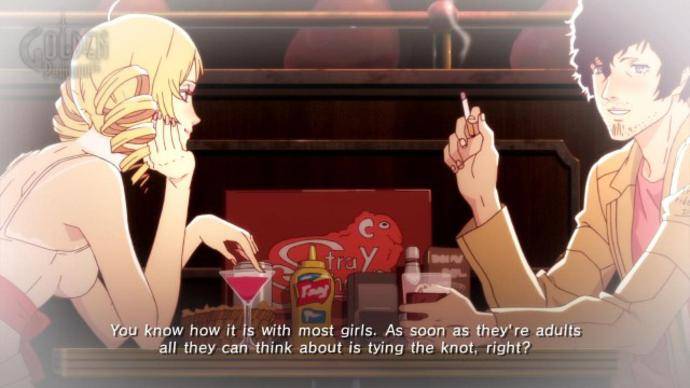 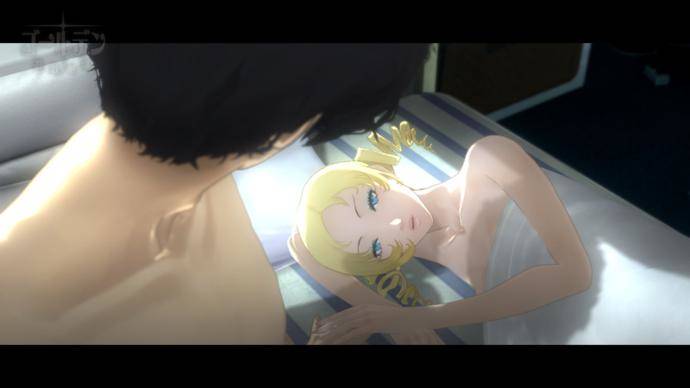 It certainly doesn’t sound like a traditional game story, and that ethos blends into the rest of the game as well. This isn’t a traditional game. There’s no single element of it that will remind you of anything else.

Firstly, much of the story is delivered either through cutscenes or at the bar. There are extensive cutscenes in this game, and while we’re not talking Metal Gear Solid 4 size, you’ll be sat for a time as events unfold. These are interactive, in a fairly vague way, as there will be occasional scenes which are altered by the morality system, which every question, every response, every conversation seems to have an effect on.

You’ll also find out more about the game’s world by visiting the bar. Each night, before the puzzle game section begins, Vincent visits a bar with his friends, and it’s here that you’ll interact with some of the other people having the rumoured dream. This is actually an incredible mechanic, and one that cannot be undersold.

At different times of the night, people will come in and out of the bar. Whenever you’re having a conversation, time will pass, and the population of the bar will change massively as time goes by. By listening to the other patrons, by supporting them and offering answers to their problems, there’s a better chance that they’ll survive the dream world and make it to the end of the game. This gives you an interesting sense of responsibility, a factor increased by incredibly written back stories for even the smallest of characters.

This offers huge potential for replayability. There are characters that you might kill off within the first couple of days who you’ll learn practically nothing about, and others who will die towards the end of the week, people you’ve supported and spoken with each night. Saving people who otherwise died might be the driving force in replaying the story, finding out about those who died too soon an added bonus.

The flow of time means you can’t save everybody, and as the deaths begin to pile up, you’ll feel genuine guilt for your actions (or lack thereof).

Catherine is a game about guilt, in fact, and it does a great job of casting you as the cheating boyfriend. Regardless of your gender or attitude towards either of the women in Vincent’s life, you’ll have a mini-heart attack whenever you’re about to be caught. You’ll scream at your TV when he’s about to screw up and reveal too much, or when one of the girls asks a question he can’t answer. You may not like Vincent, Catherine or Katherine, but you’ll experience real stress whenever the love triangle feels close to exposure, and depending on your actions there are more than a few ways that the story can end.

And then there’s the puzzle game.

While the story keeps you moving forward, the moving of blocks and climbing of the tower is a barrier designed to stop you by all means. It’s appropriate, given the story, but not very enjoyable. It begins simply: drag out blocks to build a staircase up a tower of blocks. If you survive, you can move onto the next puzzle (or the next day), but if you lose, you’re dead and must start again. This becomes more difficult with the addition of explosive blocks, of blocks that move of their own volition, of blocks that crumble under your feet. By the time you reach the end of the game, there will be trap after trap, and you’ll either need to nullify them or venture round them if you want to reach the end.

There’s nothing really wrong with the block game, outside of the fact that it just doesn’t feel that fun most of the time. You don’t feel you’re getting much out of it that benefits the game itself, except that it is the game. Some will love the strategic quick-thinking needed to get through the hardest levels, others will tolerate the gameplay as a means to finish the story once or twice. Others will be put off by it entirely.

The last level of each area of puzzles is dedicated to a boss fight. These can be cruelly unfair, although it’s interesting to see the sorts of monsters Vincent creates for himself. Once you’re done with the final boss, there’s the Tower of Babel mode to hold your attention – a series of more challenging puzzles – or the mini-game at the bar (which is exactly the same puzzle game, only with characters based on Rapunzel).

There’s hundreds of hours of gameplay here for people who love the idea, and even getting the most out of the story will take hours on end. And it’s funny. Even though the puzzle game isn’t necessarily very fun, it’s certainly addictive, and I feel myself wanting to play it regardless of the reward – the story – having been spent.

Catherine is another of those games that tries to blend actual Anime animation with Anime-style visuals, and it’s an effect that works very well. Cutscenes are a pleasure to watch, up there with the stuff from the Professor Layton games, and the gameplay is at worst, a good attempt at creating a 3D version of that style. At best it’s seamless.

The general design is very good as well, far better than the block puzzles perhaps imply. You get a feeling of living in a real, breathing world.

The voice acting, while again very Anime-inspired (and so slightly over-the-top), is generally very good, although they’re stuck with having to say odd lines occasionally. The earliest surprise is when Vincent heads to the bar and shares with his friends that he peed his bed, not something many of us would choose to share with friends in a bar. There are several scenes like this.

The musics very good as well, and more than suits its purpose. It’s not the sort of thing I can imagine wanted to sit down to listen to, but as a part of the game it more than makes its mark.

Catherine isn’t a love it or hate it sort of game. There are definitely parts that you’re going to love, there are definitely parts you’ll find surpass the average. Instead, there are parts of Catherine that you might not enjoy, and there are parts that you might just flat-out hate. The fantastic bits more than make up for the more lacklustre parts of your adventure, and Catherine is an affair you just won’t be able to tear yourself away from.