The Soul series has been running for a long time, since 1996 in fact. Not unlike Namco’s other fighting series, Tekken; Soul Calibur has stood the test of time and is still a popular franchise today. Innovation has always kept the series fresh and interesting, but does the fifth installment continue this tradition?

The standard Arcade, Practice and VS style modes are all present as you would expect from a fighting game; as well as a Character Creation Mode. The main innovation this time around is the all-new Story Mode, which sees the player take control of a new character, Patroklos; son of series veteran Sophitia Alexandra. Now, the awkwardly named protagonist unfortunately wields a sword and shield; which is fine if you’re one of those people who likes such a move set. But just like a fish and chip shop in London, it lacks choice. No gravy, mushy peas or curry sauce; just plain old fish and chips, or sword and shield. If the game designers are going to force the player to play as a certain character, then there should be some kind of selection process of their weapon and move set. 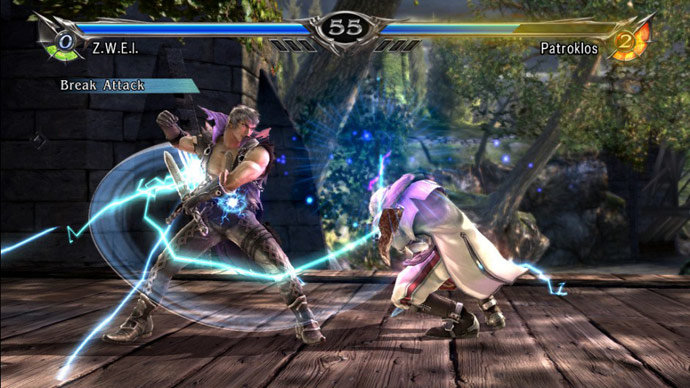 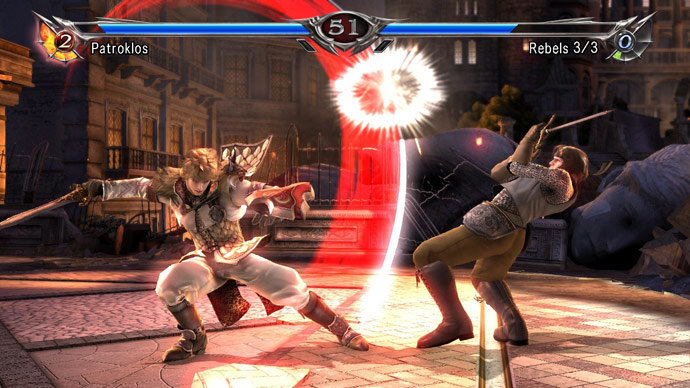 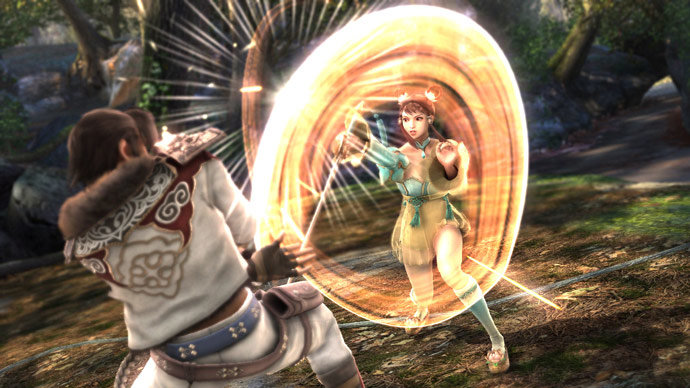 Lately, I have been playing The Simpsons Hit & Run. On that game, there is a witty remark on a newspaper which reads: ‘Study shows that 90% of video games start with easy tutorial level.’ Well, Soul Calibur V is part of the 10% that don’t. The player finds themselves being thrust into the game, playing as an unfamiliar character, which is like getting to the front line in a war, and being given a gun for the very first time. As the story progresses, the player sometimes takes control of Patroklos’s sister, Pyhrra. You might be looking forward to a change in character, but you’re in for a nasty surprise; as she wields almost the same weapon as her brother. That’s like having just two teams to choose from on FIFA, but both are Bolton Wanderers. Their mother Sophitia fought with a sword and shield so it makes sense, but it doesn’t make up for the lack of variety. Later in the storyline there are different characters and weapons to play as, but it’ll be a while before you get there.

Other than Story Mode, the Create A Soul Mode continues to go from strength to strength since its inception in Soul Calibur III. Although without Soul Calibur III’s Chronicles of the Sword Mode, the characters you create don’t really serve a purpose in the game. The Arcade and Quick Battle modes offer everything you’d expect from a 1v1 fighter, and the gameplay itself is fluid, but hasn’t changed a great deal since Soul Calibur in 1998. If you’re a long time fan of the series, you’ll also be disappointed to hear that some established characters are now gone. No Taki or Xianghua. Instead, make way for Natsu and Leixia; who take on their predecessors’ weapons and move sets. Tekken’s Heihachi may be able to live forever, but sadly this trait is yet to be passed on to anyone in the Soul Series.

As well as having fluid gameplay, Soul Calibur V mostly succeeds in the visual and audio departments. The orchestral soundtrack is fantastic, and the game is graphically impressive. The stage design shows a loving attention to detail that you’d expect from a Namco title, and levels range from tranquil woodland to bloody battlefields. The cut-scenes are also well received, though they are too few and far between. Story Mode is largely narrated by still sepia tone sketches, accompanied by a voice track; which is disappointing to say the least. Some characters’ voices also sound a little cheesy; I’m looking at you in particular, Ivy and Tira.

In conclusion, Soul Calibur V is a solid game; though it ultimately lacks innovation. Story Mode isn’t done well enough to stop the average Soul Calibur fan from craving Soul Caibur II’s Weapon Master Mode, or Soul Calibur III’s Chronicles of the Sword. The new characters are a bit bland, and don’t really win your affection like the Hwangs, Mitsurugis and Li Longs of old. Soul Calibur V is somewhat enjoyable, though like the parent of a child whose grades are slightly below average; I expected better.