9.3Based on
2 ratings
Login / Register to rate.

The Far Cry series began life with the Crytek-developed PC title, Far Cry. Positively received on release, the original game cast the mold for the sandbox-shooter franchise and though development since that first game has been handled by Ubisoft Montreal, the second instalment received similar praise. Now, Far Cry 3 has arrived with the aim of continuing the series’ success, and fans will be pleased to hear that it doesn’t disappoint.

The player character, Jason Brody, and his friends are happily vacationing in Bangkok until a group skydive gone awry delivers them into the hands of a group of pirates (led by their psychotic captain, Vaas), who subsequently imprison them with the intent to sell them into slavery. Jason, with the help of his brother Grant, manages to escape, though Grant is killed in the attempt. This sets the game up nicely, as you (with the help of local tribesman Dennis) seek your revenge against Vaas and those who killed your brother. The characters you meet along the way, such as Vaas and others, are much more interesting than Jason’s vapid, one dimensional friends – Jason himself isn’t a particularly likeable character, and his transition from pampered rich kid to bush-savvy pirate-slayer in a matter of days is a little unbelievable. This doesn’t hamper the otherwise excellent gameplay experience, though a more cohesive story would have been very welcome. 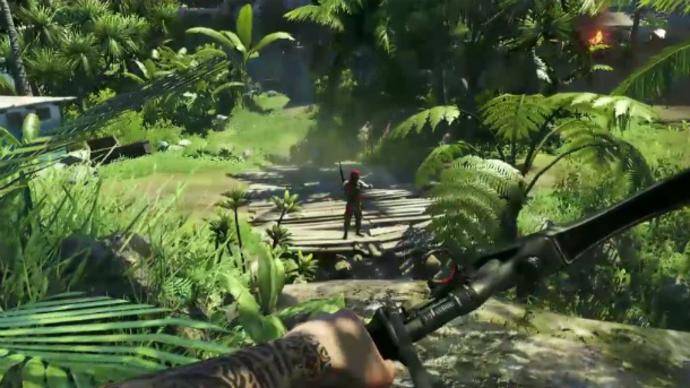 Movement and gunplay is fluid and responsive – guns feel as though they have real weight and power, and vehicles, while a touch loose in their steering, are great fun to drive once you have the hang of them. A new addition to the series is the radio towers scattered throughout the gargantuan island – basically the same as the synchronize points in the Assassin’s Creed games, reaching the top will reveal the map in the tower’s vicinity, as well as rewarding the player with goodies and occasionally a hang-glider launchpad. Stealth also plays a fairly large part in the game ,and is required on certain missions – Jason must perform knife takedowns and use rocks to distract enemies, as discovery will lead to mission failure and reloading from the last checkpoint. The stealth, while weaker in general compared to standard combat, is still fun to play and makes a nice change from the shooting-orientated missions. There are also a fair few unique sequences, such as a hallucinatory cave crawl and being tasked to tail a target without being spotted – these help to break up the pace and keep the game interesting.

Something that deserves mentioning is the sheer amount of things to do in the game; the aforementioned radio towers, pirate camps to recapture, races, shooting skill tests, WW2 letters to collect and relics to find are just some of the things available for the completionists out there to get stuck into. It would take a staggering amount of time to see and do everything in Far Cry 3: make no mistake, this game will keep you busy for a long time. This is all besides the fantastically chaotic game world that could keep you entertained for hours on end all by itself; one of my favourite moments (so far) is piloting a hang glider down into an enemy jeep, somehow killing the driver, and watching the vehicle get caught up in the hang glider wreckage and exploding. These unscripted events are often the ones that stick in the mind the longest, and Far Cry 3 is full of just such events waiting to be created.

Then there are the crafting and levelling systems – both fully fledged features, they enable players to craft their own upgrades and choose a skillset best suited to them. The level system rewards players with skills and stat boosts in the form of ‘tataus’ (tattoos to you and me), though some of the upgrades feel like they should have been included at the start of the game. For example, in a title that relies in some parts on stealth, a silent knife takedown should not be an optional upgrade. It can occasionally feel as though these skills are just restrictions being lifted rather than actual enhancements, but thankfully the rest of the system works well and is useful. The crafting, while unremarkable, works well and acts as another distraction for you to while away the hours on the island.

Graphics have always been a high point for the series, being consistently praised throughout the franchise’s entries, and Far Cry 3 makes no exception – the island is stunningly beautiful in places, and NPCs are convincing and well rendered. The fire, light, and water effects are particularly worthy of mention, and it all adds up to create an immersive environment you can happily lose yourself in. There are a few issues, however; I noticed a lot of object pop-in while hang-gliding, but for a seamless world this big it is not unexpected. Nevertheless, the world stands as one of the best-made examples of sandbox environments, and other games would do well to follow its lead.

The audio in the game is, on the whole, pretty good. Sound effects are convincing and realistic, though I found the voice acting a little strained in parts; Jason’s generic action hero comments don’t help endear me to the character, and the tribespeople’s accents range from vaguely authentic to downright hilarious – I had always wondered what a cockney Nigerian would sound like, and luckily Far Cry has my back. I also once had inexplicable dubstep-type music pounding along during a tense stealth mission, which actually made it quite difficult and really ruined the atmosphere. You’ll spend most of your time listening to the tinny reggae/50’s radio stations in vehicles, which I actually quite enjoyed, and overall the soundtrack does a good job of enhancing the various sections throughout the game.

Online play in Far Cry 3 is plentiful, with the game offering a completely separate dedicated co op mode. Set 6 months prior to the events of the main story, it sees you and up to 3 friends on a mission to reclaim money stolen from you by pirates. While only lasting approximately 6 hours, the co op campaign is a fun (if short) distraction, and it’s nice to see the developers have gone to the trouble of making a fully-fledged co op mode rather than just tacking one on to the main story. There is also a standard multiplayer death-match mode, which is solid and carries the fluid controls over from the single player game. There are a few cool touches, such as ‘clinging on to life‘ (read: mashing the X button) while waiting to be revived, and personalised cutscenes at the end of each map with the winners intimidating the worst player on the opposing team.

Far Cry 3 is a game which will happily suck you in and drain countless hours from your life. While the story may not impress you, the sheer scale of the island and the number of activities on offer should do. In terms of value for money Far Cry represents one of the best investments you could make on a single title – it’s a game that will perpetuate itself long after the 15-20 hour story mode is finished, through those happy coincidences that result from players let loose in such a polished and well-made game world.