The Wii U version of Sonic Lost World was a little bit weird. It blended, with varying degrees of success, the main staples of Sonic with a more exploratory, slower paced level design. It has been met with mixed reaction by fans.

The 3DS version is much of the same, although the little changes that have been made make this the superior outing for the Blue Blur.

One of the biggest problems SEGA have had in the last decade and a bit – if you don’t count all that recovering from the Dreamcast stuff – has been how to make Sonic work in 3D. Mario, in Mario 64, took to the idea quite naturally, but few others were as lucky. Like the transition between silent movies and talkies, the change between 2D and 3D killed many an icon.

Sonic just wants to hold on.

And that, almost ironically, is one of the main focusses for Sonic Lost World. Whereas the main focus in previous Sonic games was to avoid obstacles while going at a high speed, Lost World’s focus is instead of staying as close to land as you can.

This isn’t as easy as it sounds. Even the early levels comprise of narrow bridges between larger blocks, and when running at high speed, it’s far too easy to slip off. This is why there’s a dedicated run button, the first for a Sonic game and something of a surprise when you first start playing (shouldn’t Sonic always be running?). It makes sense, and soon you’ll start getting a feel for it.

The 3D levels seem to have a slightly simpler feel than the Wii U game, although it’s still more difficult that previous outings. This simpler design gels better with the control scheme and new features, so those disappointed with the new direction might enjoy the double dip. 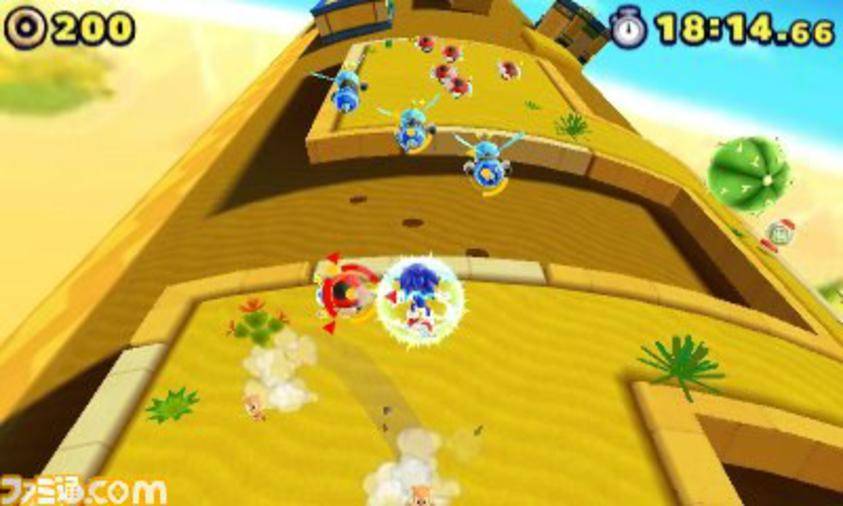 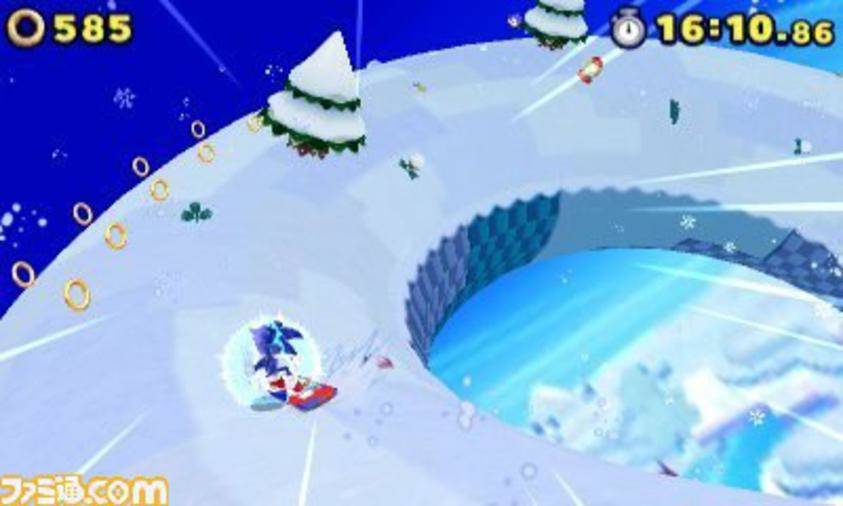 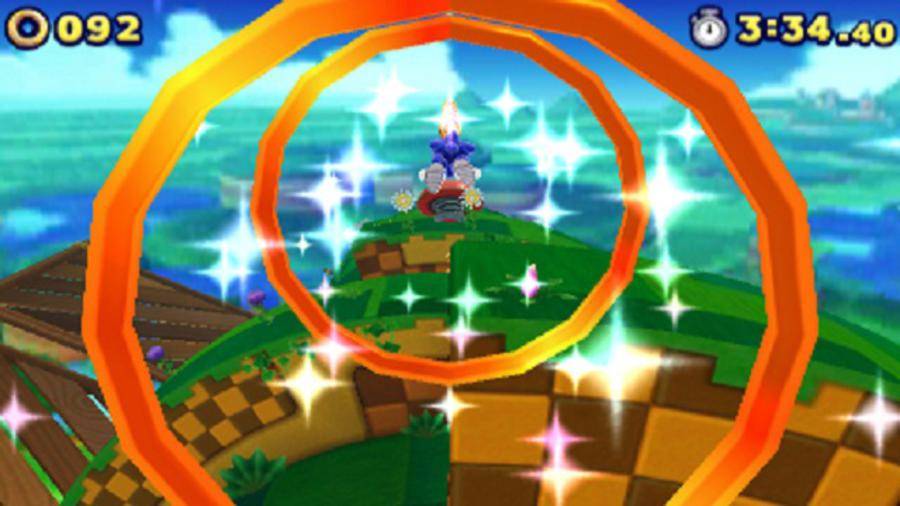 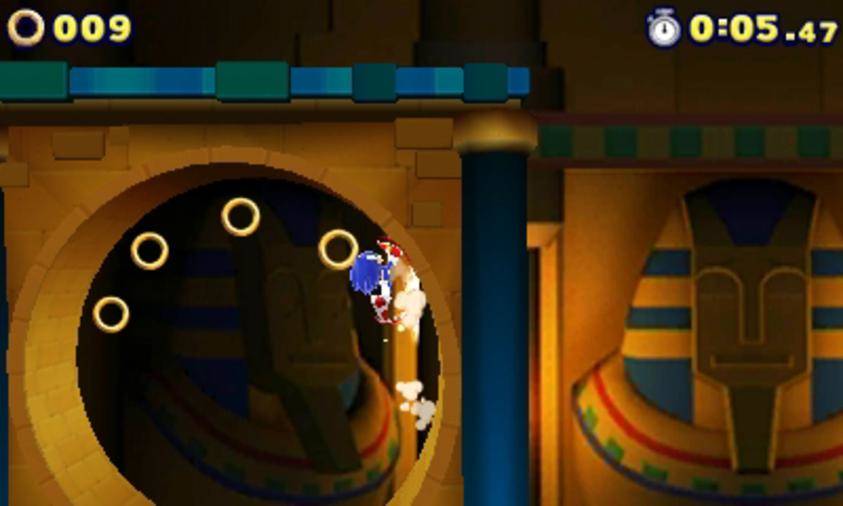 On the other hand, the traditional platforming segments – which borrow quite heavily from the likes of Sonic & Knuckles – are pretty much more of the same, if you’ve played any of the 2D Sonic handheld games in the past. The focus is far less on exploration, and far more on moving as quickly as you can to the right. It’s as good as it’s ever been, with a few surprises that are bound to make old fans smile.

Out with the Old…

The biggest problem with Sonic Lost World is that Generations was so good, and that remains true on the 3DS. Generations managed to bridge the 3D to 2D thing so well, that when you see the new features in Lost World, you can’t help but think it’s a step back.

Small children will find the latter levels incredibly frustrating, and maybe will dislike actually having to watch where they're going

It’s not. It’s just something new.

And with the cliff climbing and wall running mean that action levels no longer really exist. You’ll still have a rewarding experience playing over and over again if you’re into that sort of thing, and really the game has been built with speed runners in mind, but it’s not as simple as timing and route. Now you have to deal with precision as well.

Small children will find the latter levels incredibly frustrating, and maybe will dislike actually having to watch where they’re going. Older children (anyone above twenty or so) will either enjoy the challenge and heavier focus on searching each level for red rings and hidden areas, or they’ll dislike the lack of speedy sections.

How to Hurt Your Eyes

There aren’t many games on the 3DS where the average person will feel bad actually using the 3D, but this is one of them. The combination of speed and movement just doesn’t sit well when in 3D, and there’s more ghosting than there needs to be. It’s definitely worth playing this one in 2D.

Even then, there are moments of severe slowdown, which can be very distracting.

There are some exclusive 3DS features to convince you that rebuying a handheld version isn’t a complete waste of time (it being the better game should do that…), although they’re not all that interesting in the context of the game. As a set of mini-games, they’re fine, and will be interesting for children. You won’t be reaching for your 3DS just to play them though.

The length is pretty decent. Not as long as the Wii U title, so if longevity is important to you it might be worth going with the home platform, but long enough that short bursts of play – a level here, a level there – will almost certainly get you your money’s worth. This is especially true when you come across one of the levels that are less about exploration and is more of a puzzle. These things are frustrating, and the first time will seem to last forever.

The 3DS version of Lost World is probably the best, but it all comes down to what you want to play and where you want to play it. In terms of pure design and gameplay, the handheld game feels slightly tighter, presumably because they’ve made allowances for not having a full controller at your fingertips. Slowdown and a lighter replayability is the only thing stopping it from really being the superior version.

Even so, it’s still not going to be the best Sonic game ever released. They took a risk, and there will be people that like the new Sonic and people that don’t. The quality of the gameplay, the success of the implementation of design… these things don’t really come into it when the basic layout of levels are putting you off. What they have done though works well enough.

All in all, Armored Core V is a pretty good game, though maybe not the step forward some were hoping for. It could certainly have been better, but what you do get is solid and enjoyable. If you’re a fan of the franchise, I highly recommend checking it out.