Project X Zone should perhaps win the award for the most exciting game with the least descriptive, least exciting name. It sounds like a fantasy extreme sports simulator, like Dead Ball Zone or something of that kin. And yet, behind the name there lies not only a cross-over project perhaps unrivalled in gaming – only beat perhaps by The League of Extraordinary Gentlemen elsewhere – but a decent tactical RPG that will suck you into the genre whether you have prior experience.

Whether you love SEGA, Capcom or Namco Bandai, or if you just like anything that let’s you see characters you recognise out of their usual context, Project X Zone is a must-purchase.

Getting the Band Back Together

Something is going very wrong and worlds are colliding. People from different time zones and universes are finding themselves teleported to places that some of them recognise… but which don’t seem to be quite right. From shopping malls to ancient tombs, demon hunters and show girls, fighters and special agents must come together to destroy a threat that will stop the world as we know it.

Project X Zone should perhaps win the award for the most exciting game with the least descriptive, least exciting name

The story for Project X Zone isn’t especially interesting. Standard end of the world, good vs evil fare, but it serves as a way of getting together characters from some of your favourite franchises together. Street Fighter, Resident Evil, Dead Rising, Devil May Cry, Virtua Fighter, Shining Force, Valkyria Chronicles, Tekken, Mega Man and more, both old and new, are all represented with characters playable or mentioned.

This is both a blessing and a curse. It’s done extraordinarily well, with characters from a wide variety of games and genres, and there are few missing that could have reasonably been put in that wouldn’t have broken the semi-realism vibe and that are seen as a figurehead of their respective franchise. This is fantastic when you’re seeing characters from Street Fighter, Resident Evil or Tekken, but these are obviously in the minority. With tens of characters to have in your party, there are more than a few that are from smaller titles and that you won’t necessarily recognise.

Given that Project X Zone is all about fan service, this can result in you feeling a little left out of certain conversations. This can be especially difficult if the game being referenced was never released locally to you or if it was only in Japanese.

Thankfully, you’ll keep moving on regardless. The gameplay is good enough and internationally famous characters introduced often enough that you’re never completely in the dark as to where you are or why you’re doing what you’re doing. 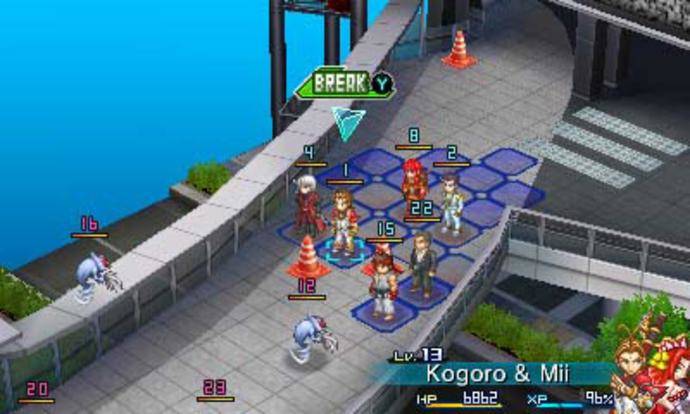 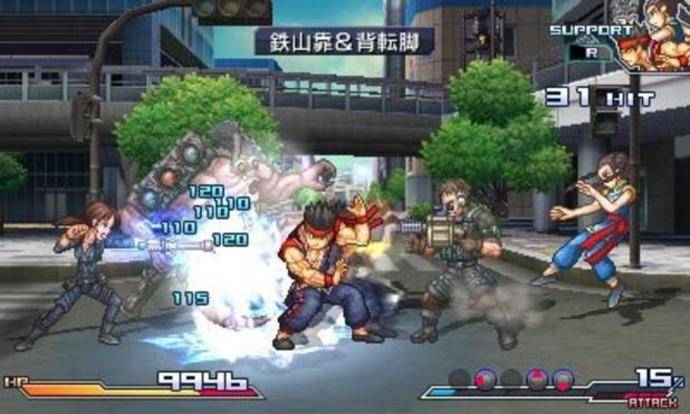 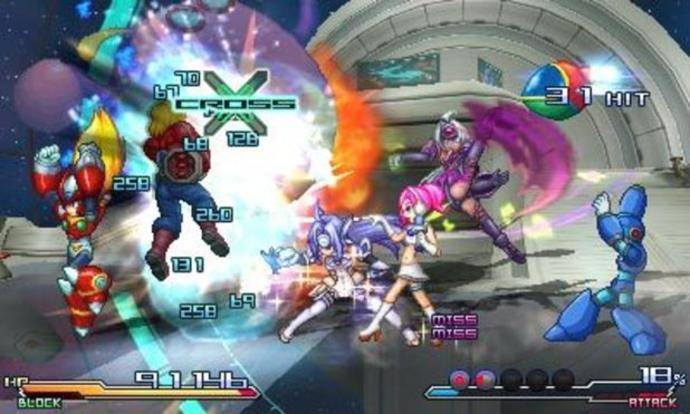 It is, for all intents and purposes, a tactical RPG. Get your characters as close to the enemy as their attack range allows, make your move, do your damage, move onto the next turn. This is changed slightly with Project X Zone, thanks to a combat phase that replaces the regular old attack animation. Instead, it becomes almost like a fighting game, showing you Smash Bros.-esque moves to make on screen.

This adds a whole new layer to the combat, although the average player probably won’t be interested in cracking the code that makes one move especially more potent that another. It makes you a bigger part of the action though, and that helps.

What doesn’t help is just how wordy the whole thing can be. Project X Zone is stupidly text heavy, some voiced (the Japanese cast is excellent) and some not. Of the 50+ hours it’ll take you to see everything on offer in Project X Zone, perhaps only half of that is gameplay… I might even be being generous.

It’s an RPG after all, so I suppose on one level it is to be expected, but those that would prefer to spend more time over strategies and less time going through story may want to look into something a little more hardcore.

Talking of hardcore… Project X Zone is definite fan service, and that means barely dressed characters, lines like “if you’d only have kicked higher, it would have been great” and bouncing boobs. For those that don’t mind a little heavy sexualization – and I know most people don’t really mind so long as it’s done in a way that doesn’t interrupt the gameplay – there will be very little to complain about, but even the staunchest anti-feminist may admit that things can at times go too far.

Project X Zone is definite fan service, and that means barely dressed characters, lines like 'if you'd only have kicked higher, it would have been great' and bouncing boobs

It was when the girl in what was basically a bikini told the girl in the slit dress that she wasn’t really dressed for combat that I laughed the most.

This is very much displayed in the artwork, which is glorious. Sprites are excellent, the speech/battle designs are fantastic, locations are done well. It’s the first 3DS game I’ve managed to get through where I didn’t feel the need to turn off the 3D effect every so often.

That’s partly because of how many characters there are though. Dozens. Most characters travel in pairs and you can add an extra character as well. This means there’s quite a scope for mixing and matching, and collection can take you quite a while as well.

The developers set out to make a certain sort of game in Project X Zone. It’s the ultimate cross-over, bringing together characters you never thought you’d see on the same screen. It’s also the ultimate fan service, and story and perhaps decency suffer as a result.

If you don’t mind a long game, don’t mind excessive amounts of boob (is there such a thing?), don’t mind a ton of text, go and buy Project X Zone. It’s one of the better games on the 3DS.