Mario and friends have been absent from the golf course since 2004.  10 years later, however, the gang is back at it.  This time, your Mii is invited!  Mario Golf World Tour takes everything that is good about the Mario Golf franchise and takes it to a new level.

Keeping With the Formula

When it comes to how Mario Golf is played, little has changed.  The similarities between older franchise titles and World Tour are numerous.  The game once again allows players to either use an automatic swing method or a manual one.  When using automatic, the player only chooses the strength of the shot, while accuracy is controlled by the game.

Manual mode allows for more precise shots. Players use a three button press approach: press to begin the back swing, press again to determine power, and then press a final time to determine accuracy.  The benefit of the manual mode is the ability to place topspin and backspin on the ball.

Wind once again plays a factor in the game, but unlike other Mario Golf games, the wind difficulty ramps up incredibly quickly.  While playing Mario Golf Toadstool Tour, for example, players could easily play through the first few courses with a minimal variation in wind strength and direction.  In World Tour, however, players can expect to deal with 17 mph winds on the second course.  The wind makes the holes difficult to master, while not ever being overly frustrating.

Mario Golf is a steal at 29.99 USD.  Most 3DS games cost $34.99, while a few even reach as high as $49.99.  World Tour is filled with hours upon hours of game play.  I’ve had it for 48 hours and have logged 19 hours.  I expect that I will play Mario Golf for more than 100 hours, and every hour will be as enjoyable as the last.  This amount of time spent playing a Mario sports title is almost unheard of.  They usually lack the long term appeal of Mario’s adventure games.

The amount of content here is immense.  Right off the top, players are given two options: a Quick Play mode and the new Castle Club mode.  Quick Play is just your classic golfing modes, either by yourself or with others.  There is stoke play, match play, and speed golf.  Match play against Mario Kingdom characters to unlock their star ability, which allows them to hit farther than they normally would be able to.

There is also a challenge mode – which I have lost myself for hours in already – available, which gives you a number of challenges to complete for each course available in the game.  These tasks range from beating Mario characters in match play, completing three holes within a set amount of time, collecting a coin in an out-of-the-way place on the map while finishing under par, and collecting 100 coins over three holes.  This is only a portion of what is available in this mode.

Overall, its much the same as previous Mario Golf titles, and this is not a bad thing.

The other interesting addition to Quick Play is being able to play rounds of golf with item boxes littered around the courses.  The ability of the items varies, but they are often placed in such a way that you will use the item right after you receive it.  For example, the ice flower item allows you to take aim at any water hazard and have your ball bounce on a patch of ice.  It works well when trying to reach the green in two strokes on a par five, when the only thing standing in your way is a pond.  The downside to this mode is the lack of adequate tutorials or videos showing you exactly what each item does which can often be frustrating when playing in a close match. 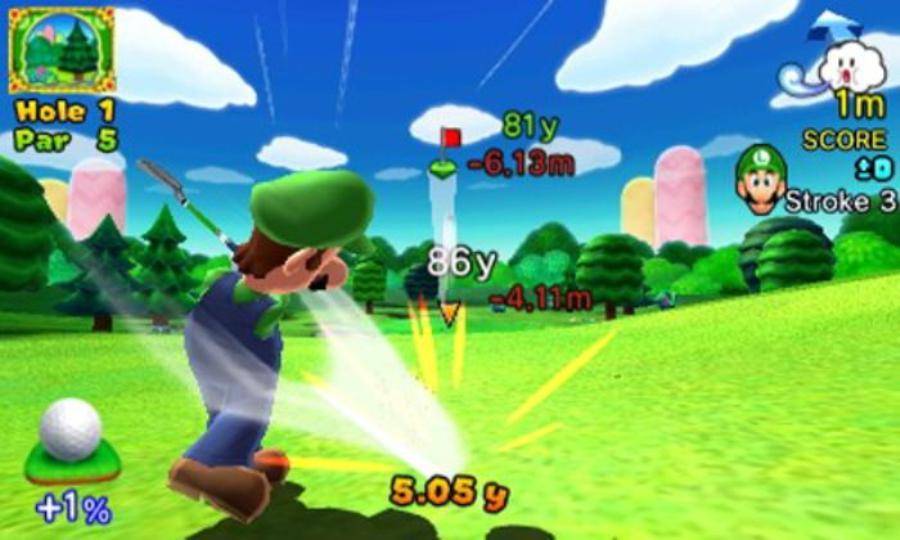 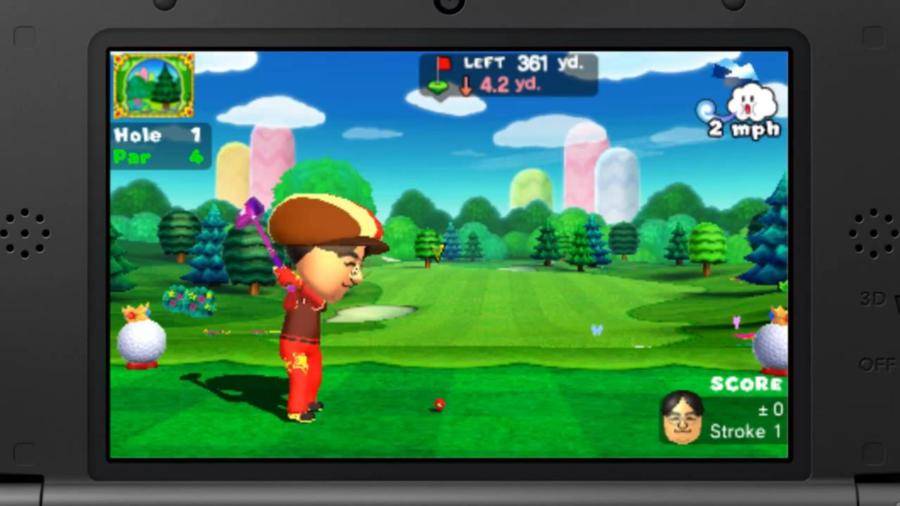 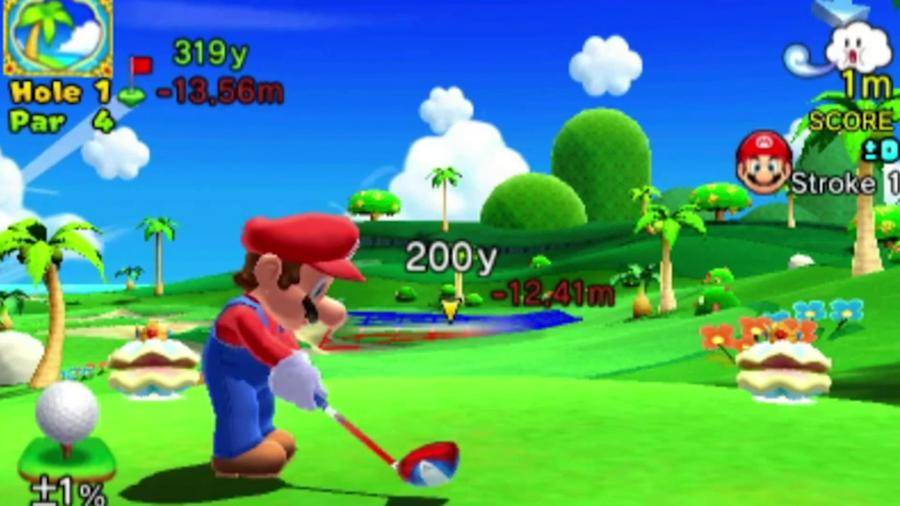 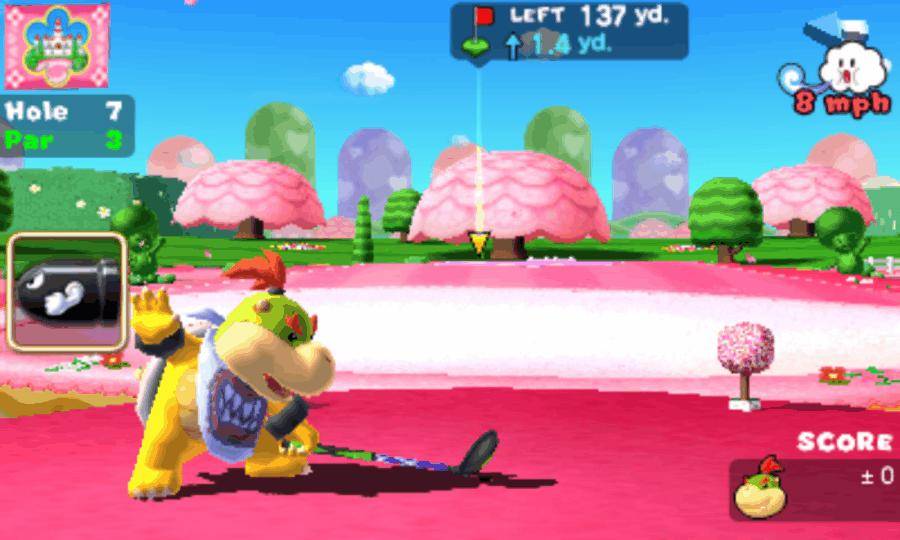 Luckily, Nintendo has not limited the game to quick play.  Castle Club mode adds to the already large amount of content found in the game.  In Castle Club, players use their Mii character to do a variety of tasks in a Mario themed country club.  From the clubhouse, players can wander the grounds, playing on one of the three regular courses – Forest, Seaside, or Mountain – or tackling a range of wacky Mario themed courses.  The downside is that only two courses are available when you first start: the Forest course and Peach’s Garden.  You must progress through the different tournaments and challenges to unlock more.  Within an hour, however, I had three more courses at my disposal.  The time it takes to unlock new content seems short.  On the grounds, there are also training challenges which allow players to hone their skills while playing some fun, yet challenging, mini games.

Mario Golf is the best 3DS game out this year, and ranks with the best when it comes to available content

Inside the clubhouse, players can access online tournaments, change up their gear to increase stats, or wander around receiving tips.  The annoyance here is that so much of the club house serves no purpose.  There is a change room and weight room that have no purpose in the game, except to house a few Mario characters ready to give you a pointer or two.  The rooms are necessary to complete the clubhouse vibe, and therefore, I wish they had more of a purpose in the game.

The only real game play gripe is the camera control, and even this problem is infrequent.  At times, it’s difficult to line up a shot because the camera will not show you the entire trajectory of the ball.

This is a Mii Game, but not always a Me Game

One of the best new innovations in World Tour is the ability to play as your Mii, although it must be noted that Mii characters were not around when the last Mario Golf game launched in 2004.  You can golf with your own likeness against characters from the Mario Kingdom, or take your Mii online and hit up the links with your friends and against complete strangers in huge, Nintendo hosted tournaments.  In fact, this game is probably most enjoyable when played with friends or online against the rest of the world. Unfortunately, unless we see a day one update, no download play currently exists, which means both you and your friends will need a copy of the game.

Despite a camera that sometimes doesn’t do what you want, Mario Golf World Tour is a solid title. The game looks and sounds amazing, taking all the charm of the Mario Kingdom and pairing it nicely with arcade golf.  It may be hard for this game to make its mark on the monthly NPD numbers, but only because it appeals to a niche market.  Many were worried that Mario Golf would follow in the steps of the very disappointing Mario Tennis on 3DS.  Perhaps Nintendo used the long release delay to improve this game, and it appears as if that time was used wisely.  If you enjoy golf and Mario, this is a definite buy!

Authors Note: The Online features of Mario Golf World Tour were not available when this game was reviewed.  Nintendo will not turn on servers for this game until launch day, May 2nd.  For that reason, online features are detailed, but not reviewed.  DLC content is also not discussed, but the first bundle will be available on release day.